The teenage tour guide who almost died in the Whakaari/White Island eruption has written a heart-felt message from his hospital bed, thanking the nation for their "kindness".

The Bay of Plenty tourist attraction erupted underneath Jake Milbank and members of his party on December 9, his 19th birthday.

The eruption killed 20 people – including fellow tour guide Hayden Marshall-Inman and teenage Australian tourist Winona Langford, whose bodies have not yet been located.

Milbank is one of 24 people who remain in hospitals on both sides of the Tasman. Four patients remain in a critical condition in New Zealand hospitals.

The 19-year-old suffered burns to 80 per cent of his body and is being cared for at Middlemore Hospital. Two days after the tragedy, a Givealittle page was set up to help his family financially, with donations now topping $139,000.

In a message written by Milbank and uploaded to the page, he wrote: "To everybody who has been supporting me I would like to say a big Thank You.

"We are grateful for the kind donations received through the Givealittle page and I am enjoying reading the awesome messages and comments that have come, they've really helped me.

It is the first time a survivor has released a public message after the December tragedy.

"A few days ago I moved out of ICU and into the National Burns Centre. This is a big step in my road to recovery.

"So far I have had 14 visits to theatre – sometimes the surgeons are grafting parts of my body and other times they are changing my dressings and checking out the progress of the work they have done." 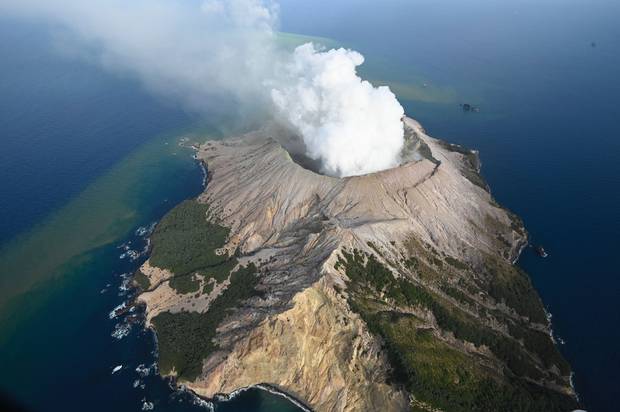 An aerial view of Whakaari / White Island after the deadly December 9 eruption which claimed the lives of 20 people. Bay of Plenty Times photograph / George Novak

Milbank wrote that his fingers were no longer bandaged, meaning he was now "able to use my iPad to catch up with my friends.

"Thank you so much for your kindness – it means a lot to me."

Milbank was working for White Island Tours as a guide when the tragedy happened.

Earlier this month – in the lead-up to the one-month anniversary of the disaster - his parents, Steve and Janet – broke their silence to thank those who had saved his life both in the immediate aftermath of the eruption, and in the weeks since in hospital.

They also spoke of how grateful they were for well wishes the family were receiving, and donations to the fundraiser.

"Any delays in getting [Jake] off the island . . . that would have been it," Steve Milbank told Whakatane's Beacon newspaper.

"So we are just so thankful to everybody involved . . . the ambos, the Coastguard, doctors, everybody. Getting everybody prepped and sent all over the country — there were helicopters flying solidly all night that night shifting people around the country. The whole combined effort was just incredible."

Steve Milbank said he wanted to give a "big thank you" to everyone involved in getting Jake, and others injured in the tragedy, off White Island as quickly as they did.

"It pretty much saved their lives," he said.

Kingi's boat had departed White Island before the sudden eruption, but he bravely returned to help the gravely injured.

"They were just five minutes away from White Island; they turned around and came back and got everybody off that they could," Steve told the Beacon.

"The helicopter pilots did an amazing job too, getting everybody out of there."

Janet Milbank added the contents of the messages the family had received had also helped her greatly.

"They certainly helped me in those first few days.

"We have had good support around us with friends and family and they have really helped us get through it as well."

Fellow survivors, American couple Ivy Kohn Reed and her husband Rick Reed are also making progress according to the latest update on a GoFundMe set up to cover expenses and help their recovery.

Ivy's brother, Barry Kohn, has travelled to Auckland to be with the pair, writing: "It has been both heartbreaking and encouraging at the same time.

"I was taken aback when I first saw them with my own eyes, as no one is accustomed to seeing their loved ones laid up and recovering from volcanic burns," Barry wrote. "However, their overall positive attitudes and healthy spirits have really shown through."

Rick is on "bed rest" as a result of the latest regrafting procedure done on his legs last week.

"This morning his legs were examined but the doctors believe the grafts on his Achilles are still too tenuous for him to start walking.

"Ivy is totally mobile and can move around freely. She recently had some additional skin grafts on her chin and neck, and her focus is on letting them heal, as well as those on her hands. She is working with the physical and occupational therapists daily on keeping everything loose and supple."

Barry Kohn added that their return to America for further treatment was dependent on his brother-in-law's progress, but potentially the end of this month could be a "reasonable estimate".

"Lava is now visible in the vents created by the eruption."

But it added: "Further explosions are very unlikely on any given day in the next four weeks. The Volcanic Alert Level remains at Level 2 and Aviation Colour Code remains Yellow."