Police have officially released the names of more victims who died in the Whakaari / White Island eruption.

Jessica Richards, 20, Jason Griffiths, 33, Martin Hollander, 48, and Kristine Langford, 45, have all been confirmed by police today as among the dead. They are all from Australia.

"We will continue to search for those two people for as long as there's a possibility of finding them," Bush told MediaWorks.

Police were working with the local harbourmaster and experts to try and predict where the bodies might be and to ensure the right areas were being searched.

The number of people who have died as a result of last Monday's devastating eruption is now 16 after two more victims died in hospital at the weekend.

One person died at Waikato Hospital on Saturday and a second victim who was transferred to Concord Hospital in Australia died yesterday.

Meanwhile 14 people are being treated at hospitals in New Zealand and 13 others have been repatriated to Australia.

The country will observe one minute's silence today for the victims at 2.11pm.

So far eight bodies including one Kiwi, five Australians and two Americans residing in Australia have been formally identified.

Meanwhile Prime Minister Jacinda Ardern has invited New Zealanders and Australians to share a minute's silence for the victims of White Island at 2.11pm today - exactly one week since the eruption began.

The search for the two missing bodies will continue on Monday and is likely to focus on the water.

Deputy Police Commissioner Mike Clement told Newstalk ZB that yesterday's search of the island had helped them rule out that the second body could remain on Whakaari.

Police now assumed both bodies had been washed down a stream and into the ocean. 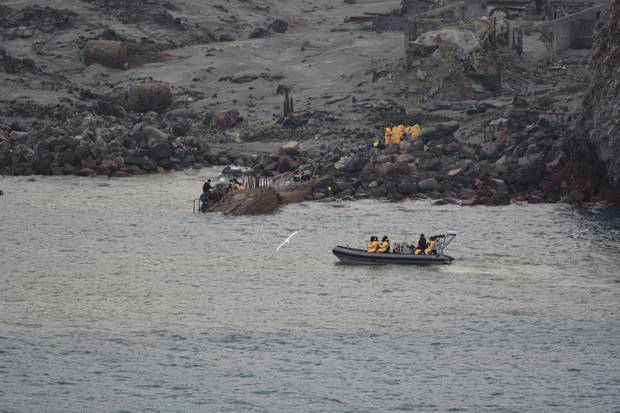 Police already knew one body was in the water as they had seen it earlier in the week from the air, and they believed a storm last Monday night had washed the second body into the sea. Both bodies had been near each other on the island after the deadly blast.

Clement said information gathered from visits to the island was helping police learn about conditions on the island. This was assisting the planning process, together with statements from witnesses and imagery collected from immediately after the eruption.

Clement said police had not yet decided whether specialists needed to return to the island to search, but divers would be back in the water and authorities would also be scouring the shorelines and water by air.

Yesterday rescuers had 75 minutes, due to the breathing gear used by the Disaster Victim Identification team, to try to locate the last body they believed could be on White Island.

Navy and police divers also searched the surrounding waters for the other body.

Conditions are proving challenging for the divers searching the contaminated water where visibility is between zero and two metres.

Divers reported seeing a number of dead fish and eels washed ashore and floating in the water.

Not finding the remains was a "blow" for police, Clement said. 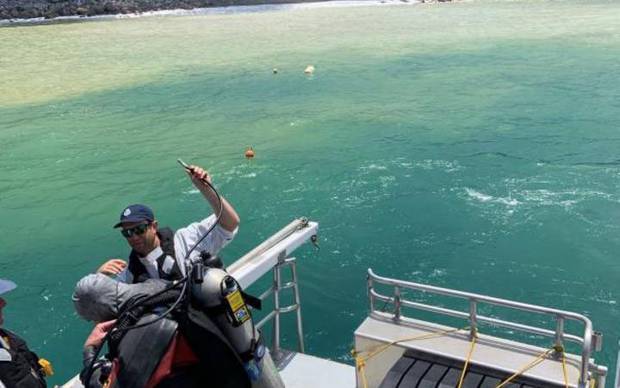 "Everyone went out there desperate to find the bodies.

"We understand completely how frustrating it is for loved ones who want the bodies back."

A search was made along a stream running down the volcano to the sea.

Police were in close contact with the families who remain in Whakatane waiting for the return of their loved ones.

"This whole community is feeling it," he said.

"I'm pleased there have been two trips to the island, and that police and NZDF
staff have come back safe and well, given the physical and mental challenges
involved in this operation."

He said staff working on the "confronting" identification process in Auckland were being supported.

"Our staff and partner agencies continue to work tirelessly as we approach one week since this tragic event and I wish to thank them for their dedication."

Meanwhile volcanic tremor activity on the island remains low and there have been no more eruption since Monday, according to GeoNet. White Island remains on volcanic alert level 2.