Residents have been evacuated in the early hours of the morning and the region is now completely cut off, following torrential downpours that caused flooding, closed roads and forced families to evacuate their homes in the Gisborne district this week.

Tairāwhiti is in for a "grim" few days, with more wet weather forecast for the area and a red heavy rain warning in place until 10am.

Torrential rain has left many communities cut off and forced at least a dozen families to leave their homes, with up to 180 mm of rain falling in Gisborne city overnight.

Surface flooding has been reported in Gisborne City and the low-lying Poverty Bay flats area.

Police and FENZ (Fire and Emergency NZ) went door-to-door in the early hours of the morning, urging people in Manutuke and Te Karaka to evacuate as river levels in the region continue to rise, with others put on stand-by.

The region is now completely cut off, with SH2 to the north and south, and SH35 closed at Okitu. The northern approach to Frasertown on SH38 is also closed, as well as SH2 in Hawke's Bay, from Napier to Wairoa due to flooding and slips.

Gisborne Mayor Rehette Stoltz said while the rain had stopped momentarily the torrential downpour was unlike anything experienced in decades.

"I've lived in Gisborne for 32 years and I have never heard anything like this," she told AM.

"I think there is still a lot to come today and I think we need to brace ourselves."

At this stage Gisborne is cut off from the rest of New Zealand, but the road agency would be checking how soon major highways that were currently impassable by flooding could be reopened.

Earlier Gisborne District Council's civil defence group controllor Dave Wilson told AM a number of rivers across the district had either reached capacity or breached their banks, and roads had been left impassable by the rain.

Families were moved in the night when floodwaters surrounded homes at Te Karaka and a nearby settlement, and were now at an emergency shelter or staying with friends.

Police reported that the Te Arai River broke its banks just after midnight, which blocked Waingake Rd and forced 15 properties to evacuated. There were no injuries reported.

Low lying households of Waingake Road at Manutuke were encouraged to evacuate just after 1.30am with others, living near the Waipaoa River at Te Karaka following a couple of hours later.

Residents along the Waimata River have been warned to be on stand-by as that too rises to alert levels.

Torrential rain through the evening and into the morning saw the Te Arai River levels rise to 3.2, superseding the 2.5m threshold for safety. 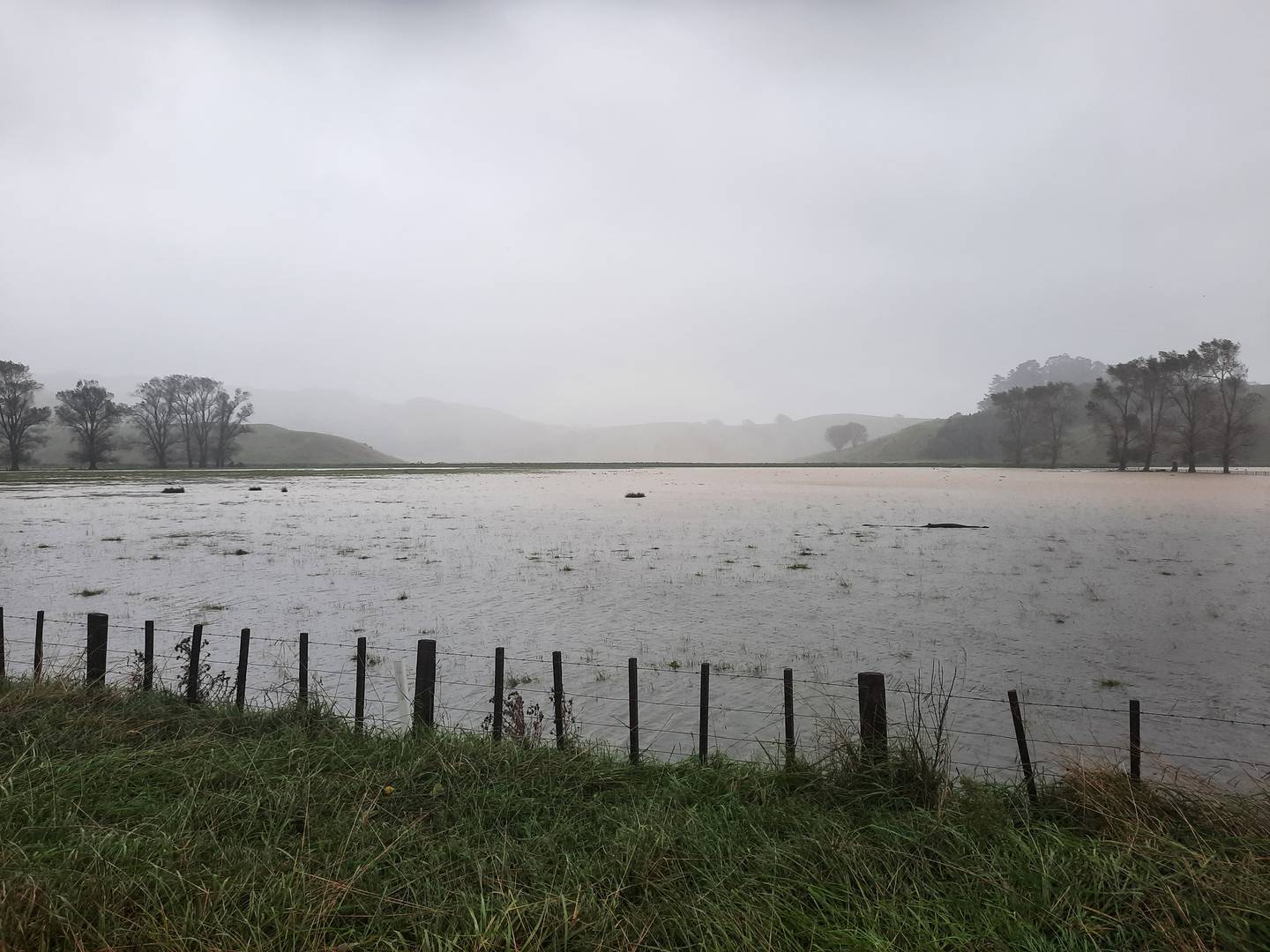 Storm damage on the East Coast near Gisborne as the East Cape was hit by torrential rain. Photo / Neil Reid

Residents were notified by e-text just after 1.30am, and evacuations started almost immediately, with police and FENZ assisting those who need help to move, while others self-evacuated.

People have been asked to report to the Manutuke Fire Station where a register is being kept with Manutuke School the evacuation centre. Welfare support is being deployed.

Te Karaka residents who live near the Waipaoa River were urged to evacuate to the Scout Hall when the river level reached 8.01m at the Kanakanaia gauge.

Wilson said the rivers were continuing to rise and those on low-lying areas needed to be prepared to self-evacuate.

While river levels are starting to stabilise, Wilson says with further rain forecast he was concerned about the possible impact that could have.

All surface water around the district should be treated as contaminated and Wilson is asking communities to lower water use where possible. 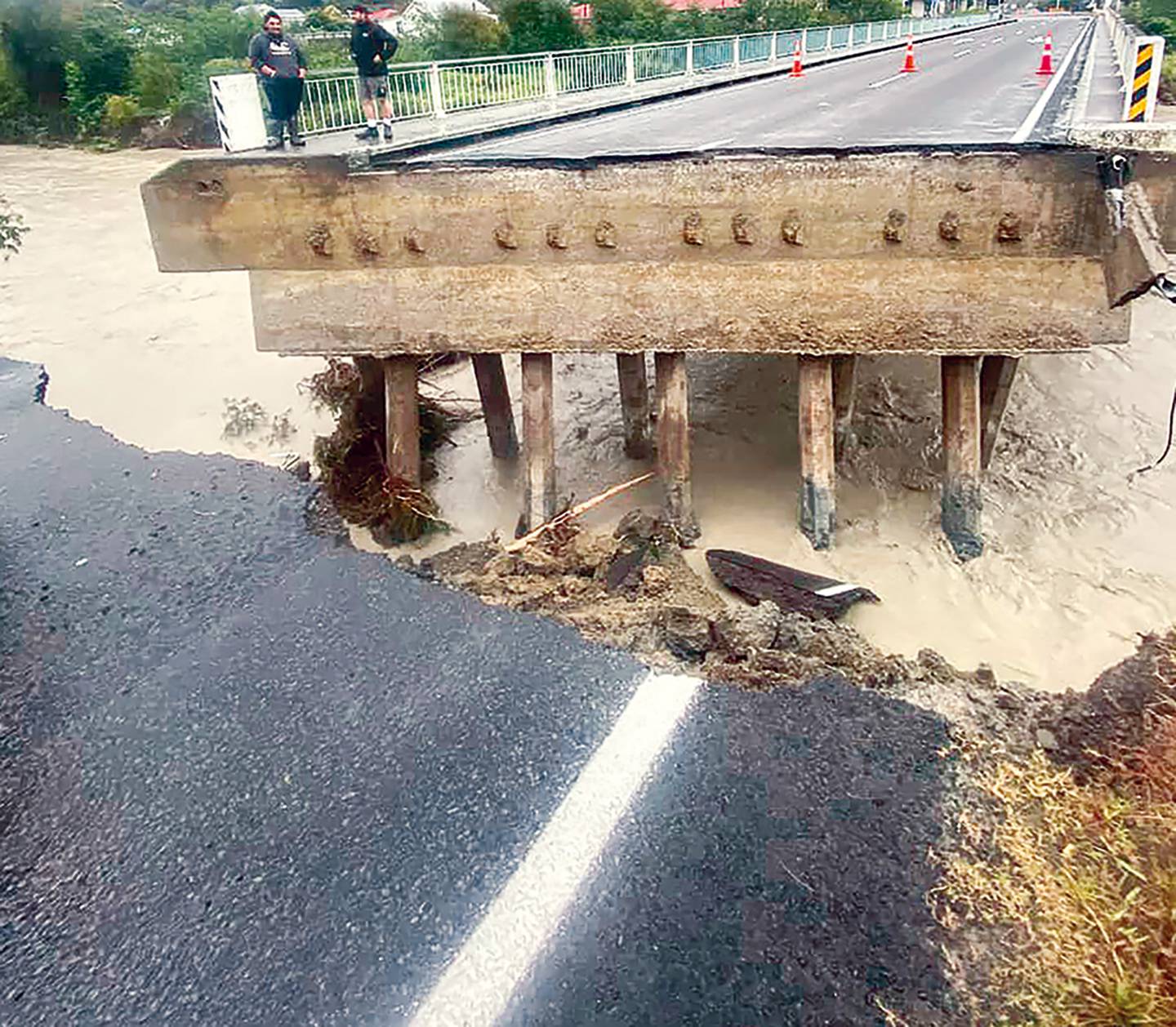 The Tokomaru bridge was washed out as the East Cape was hit by torrential rain. Photo / Gisborne Herald

"The wastewater system is inundated, so if we can take some of the pressure off there, it would be great."

He said drinking water is safe to consume.

Residents across the region are being asked to check properties and their neighbourhood and report any concerns to Council's 0800 653 800 number.

People self-isolating due to Covid were asked to go to the Rugby Clubroom Carpark and remain in their cars, where someone would come to meet them.

Earlier, Uawa Civil Defence advised Paroa Rd turn off and Mangaheia had been closed to light vehicles due to flooding.

They also issued a flood warning for Wharekaka at Hikuwai River, saying Willow Flat was 12.2m and rising.

MetService forecaster Aidan Pyselman said yesterday a "massive" 300mm of rain had been recorded in a 24-hour period in the northern Gisborne ranges.

By comparison, one of the criteria for a severe weather warning is 100mm of rain over 24 hours.

Yesterday's wild weather closed roads, forced residents to evacuate their homes and left many without power through the night as Tairāwhiti Civil Defence declared a State of Emergency. Severe flooding was also reported in Tokomaru Bay and Tolaga Bay.

The weather event was described by some as "biblical", with conditions the worst since Cyclone Bola in 1988.

A myriad of slips and washouts closed a road on the outskirts of Tolaga Bay, isolating the area from the rest of the East Coast. Te Runanganui o Ngati Porou shared images to social media showing what appeared to be power pole lying across a road, and swollen rivers.

Waka Kotahi will assess the section of state Highway 35 - between Gisborne and Tolaga Bay, and Potaka and the Ruatoria intersection - which was closed overnight due to slips, washouts and flooding, with a view to reopening the route at 10am. Rain is forecast for the Gisborne region throughout the rest of week and into early next week. Pyselman said a low off the coast was pushing in an easterly swell - predicted to reach up to 4m - making for dangerous ocean conditions. The low was predicted to weaken on Tuesday.

"It's going to be another wet day for Gisborne," Pyselman said.

"It's a pretty grim-looking few days. It's going to be pretty wet, off and on, until the early part of the working week."

Gisborne District mayor Rehette Stoltz said Tokomaru Bay - 89km northeast of Gisborne – was "cut in half" yesterday when its bridge was damaged.

"Tokomaru Bay has a lot of damage, and it's water through homes, not just in the front yard," Stoltz said yesterday.

Around 20 to 30 households had "self-evacuated", Stoltz said.

The officer in charge of the Tolaga Bay Fire Stations, Andrew Shelton, said they received a callout at 1.55am to help with a job in Tokomaru Bay after a person was swept into the river. The person was found alive and well.

Several hours later the Tolaga Bay fire crews were called to help eight road crew workers who had been trapped by rising floodwaters, with some trapped in a digger. Shelton said two were airlifted to safety while six were pulled out by the Character Roofing Gisborne Surf Lifesaving search and rescue squad.

"They were all very lucky." 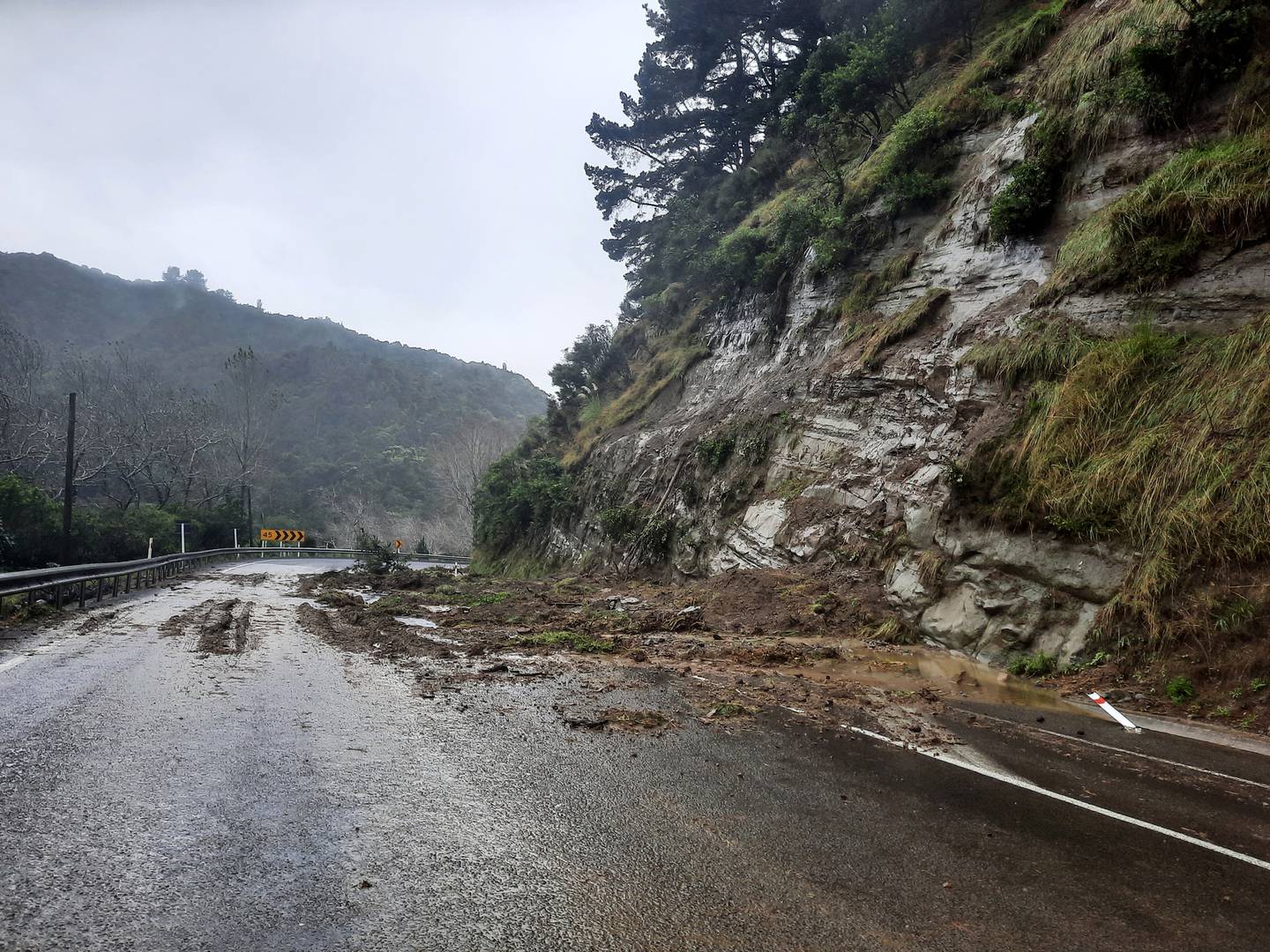 Slips of mud, rocks and trees splayed across State Highway 35 towards Tolaga Bay yesterday, forcing the route down to one lane. Further north paddocks resembled lakes after large amounts of rain hammered the region.

Earlier yesterday, Shelton told AM he hadn't seen rain like this since Cyclone Bola in 1988.

Gisborne Civil Defence manager Ben Green described the event as "biblical", saying the rain was a lot of heavier and coming sooner than planned.

Search-and-rescue crews had been getting families out of bed from 1am so they could be evacuated and the river level gauges had been "pinging off continuously" since early evening.

Meanwhile, a marae in Anaura Bay was seriously damaged. A video posted to social media showed the grounds around Hinetamatea Marae strewn with debris and fallen trees.

Social media posts showed the wharenui appeared to be in good shape, but the urupā appeared badly damaged.

Anaura Bay whānau reacted with sadness to photos showing the damage wrought by floodwaters to their urupā.

"That's one of the saddest pictures I've seen," one person wrote, with another saying her heart was broken after the photos were shared by local Civil Defence. "

Rain and southerlies are on the cards for the Gisborne region for the rest of the week through to at least Tuesday. Today, MetService forecasts periods of rain while heavy falls are possible in the morning. Strong southerlies were expected to ease by the evening.