Cyclone Dovi is packing a punch across many parts of New Zealand today, with howling gales and heavy rain causing havoc - and temporarily forcing the closure of the Auckland Harbour Bridge.

Police are urging people to avoid non-essential travel as gale-force winds strike, with gusts of between 130km/h and 150km/h expected in some parts as the storm reaches its peak around lunchtime and early afternoon.

The call was echoed by the national transport agency, Waka Kotahi.

National Emergency Response Team leader Mark Owen says several highways have been closed due to slips and flooding, with major disruption unavoidable given the scale of the severe weather.

"Our crews are working hard to clear slips and re-open roads as soon as possible, but heavy rain and severe winds are still affecting many areas, and we need flood waters to recede in some areas before damage can be assessed.

"Driving conditions are hazardous in many areas, with the risk of surface flooding, slips, falling tree branches or power lines coming down, and people should avoid all non-essential travel in these areas."

Owen says the Auckland Harbour Bridge remains closed, with high winds continuing to affect the area. Wind is currently gusting in excess of 105km/h on the bridge, and is expected to increase before abating this afternoon.

Many parts of the North Island and the upper half of the South Island have been hit hard already - the deluge has seen several households evacuated in Wellington overnight as landslides hit the area. Many roads are closed and surface flooding has been reported in some areas.

There are reports a man has been taken to Waikato Hospital with serious injuries after a tree is believed to have fallen on his vehicle in Raglan.

Police said the incident was reported around 11.30am at Main Rd in Raglan.

"It is understood the vehicle was mobile at the time," a police spokesperson said.

In Auckland, heavy winds led to the Harbour Bridge being closed at 9.30am, with motorists told to use alternative routes to get across the city. The wind is already gusting to more than 100km/h. In Wellington, high winds are disrupting flights.

WeatherWatch's Philip Duncan said the gusts were intense, with the risk of power cuts as trees fell victim to the wind. Some places had already seen gusts of more than 150km/h.

SH1 AUCKLAND HARBOUR BRIDGE - 9:30AM
Due to heavy winds, the Auckland Harbour Bridge is now CLOSED. Please use an alternative route. Please refer to our traffic map for more info: https://t.co/nkeI0hItS3 ^DL pic.twitter.com/YFxeqlS2Nr

"[We] are asking people in areas impacted by the bad weather to avoid non-essential travel," police said in a statement on Sunday morning.

MetService said in the last 12 hours, Wellington recorded 109mm of rain, Lower Hutt 126mm, Kelburn 86mm and Wellington Airport 81mm. There have also been 121mm of rain in Masterton, and 130mm in Takaka Hill (Nelson).

There have been more than 130 weather-related callouts overnight across the North Island.

MetService meteorologist Stephen Glassey said the worst was still to come, with Cyclone Dovi expected to make landfall between mid and late morning - latest forecasts have it hitting land in the northern Taranaki/Waitomo area.

Police said there were several landslips affecting houses in the greater Wellington region:

Two other roads have also been closed – a slip has closed State Highway 58 between Paremata and Haywards near Wellington. The slip was reported around 1.16am. Fire and Emergency shift manager Belinda Beets says the most severe callouts of the 50 for central fire crews related to landslides that caused problems for property owners.

She says firefighters were mainly pumping water out of homes and making sure people were safe.

Wairarapa has a number of road closures in place due to slips, water breaking the banks of the Waipoua River and trees down. There is also localised flooding in streets throughout Masterton township.

A Carterton man called Emergency Services about 3.30am after his vehicle became trapped in deep water flooding Kokotau Rd. The man was able to get out of the vehicle and was not injured. The road is now closed.

The Waihenga Bridge, between Featherston and Martinborough on State Highway 53 in Wairarapa, has been closed until further notice due to rising water levels, Waka Kotahi NZ Transport Agency has reported.

The bridge was closed just before 1am.

Police across the Central District (Taranaki, Manawatu) received a number of calls for weather-related highway blockages and minor surface flooding.

It's another warm day for Aucklanders, with a high of 28C, but those hoping for a pleasant day outdoors will be disappointed. The city has been sweltering in high humidity all week - and even the zoo animals appreciated a chilled treat this week as heat settled like a damp blanket.

Showers in the City of Sails will be accompanied by north to northeast gales gusting to 100km/h this morning, switching to severe southwest gales later in the morning and into the afternoon.

Gusts may reach as high as 150km/h, and Waka Kotahi had already warned yesterday the Auckland Harbour Bridge may need to be closed at times.

The transport agency's bridge safety protocols require the closure of the bridge to traffic when sustained wind gusts of 90km/h or higher are likely.

There have already been some very high wind gusts recorded about northern and central parts of New Zealand. Winds are still expected to strengthen in a number of regions during the next few hours so keep up to date with your forecast https://t.co/Yjbq0jxdqz ^PL pic.twitter.com/iuo3it86Hg

The impact of the high winds is being felt across the region – in Piha, plastic cladding on a major hillside construction site has been torn to shreds.

Fire crews in the north of the country have had 86 weather-related callouts from Cape Reinga to Waikato between 6pm and 6am.

The wild weather brought down trees across the roads throughout the Northland District with more than 35 weather-related incidents reported to Police. This included reports of a tree falling and damaging a home in Kauri, Whangarei.

Trees are down across some roads in Waikato and police across the Central District (Taranaki, Manawatu) continue to receive calls for weather-related highway blockages and minor surface flooding.

Police in Marlborough are reporting surface flooding, tree fall and debris on the roads and urge people to delay travel while clean-up is under way.

Canterbury is experiencing localised flooding and State Highway 1 between Kaikōura and Waipara is closed due to flooding and slips. A detour is in place. 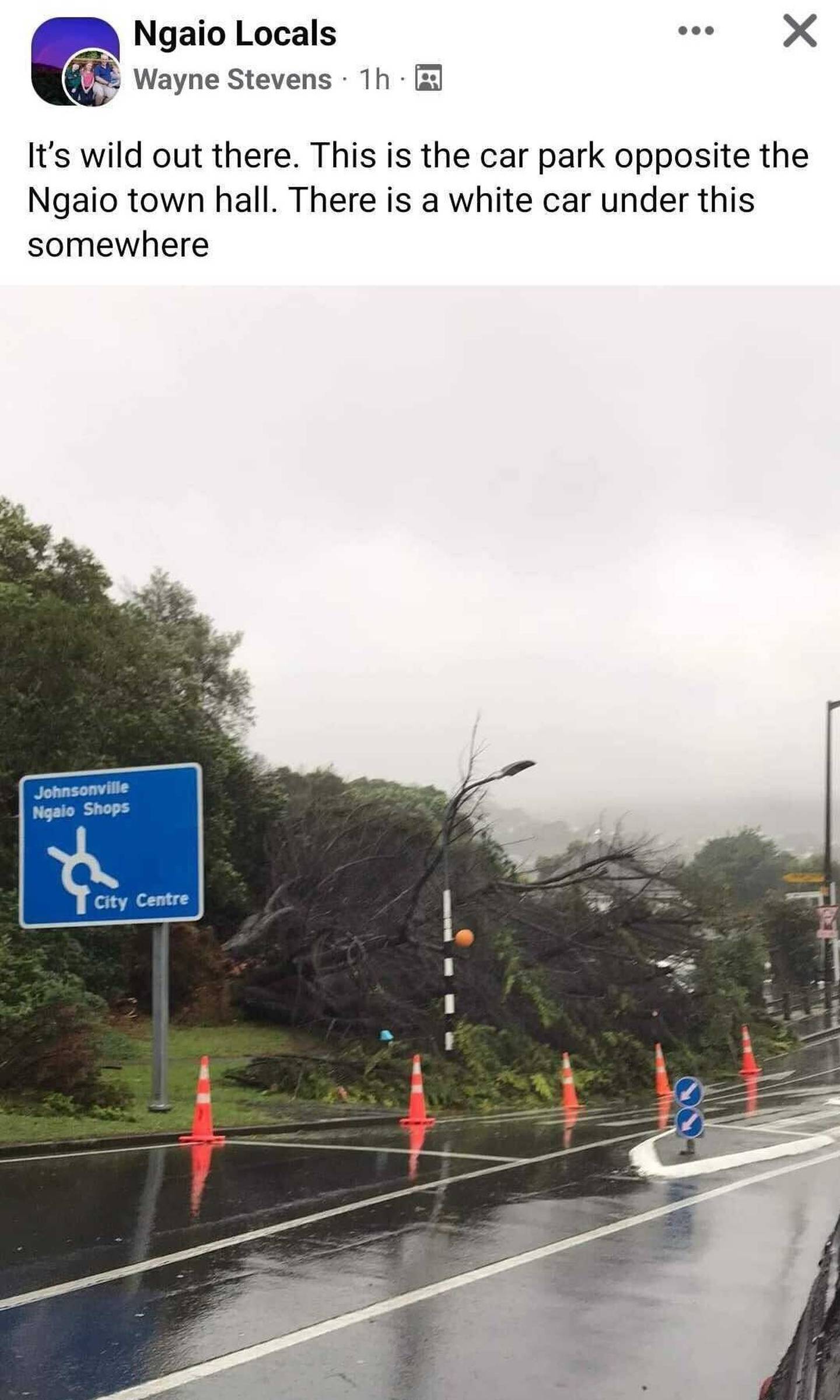 Trees have come down on cars in Ngaio, Wellington.

Latest models last night put the cyclone, which started as a tropical low between Vanuatu and New Caledonia this week, on track to make landfall between New Plymouth and Kāwhia Harbour before moving eastward across the North Island.

It's no longer tropical, but will still pack a punch and sparked wind and rain warnings from Auckland to the upper South Island last night, MetService forecaster Gerard Bellam said.

"This is an evolving situation so I think the message is for everybody is just to keep an eye on our forecasts and just take heed from what the local authorities are saying.

"You wouldn't be going out in a boat on the [North Island] west coast with the swell warnings and 50-knot winds if you had any sense."

Taranaki residents are also in for a drenching this morning, with 130 to 220mm of rain expected to accumulate about Mt Taranaki as Dovi passes.

Heavy rain warnings have also been issued for much of the central part of the country.

Taupō south of Tūrangi, the bottom of the North Island and the top of the South Island, including the Buller ranges are all in for a soaking, while watches have been issued for several other areas including Waitomo, Taumarunui, Whanganui, Manawatu and parts of Marlborough and north Canterbury.

In Wellington, where anti-mandate protesters have entered their sixth day camped on Parliament's lawn, a miserable day has unfolded.

"We do well with big [weather] events in Wellington. And that's the story [today]. We've got rain with heavy falls, gale southerlies gusting 110km/h and a forecast maximum temperature of 17C … it'll feel colder though with that rain and wind."

Remnants of #Dovi moving in. Damaging winds already impacting parts of #Auckland. It will be a very windy several hours ahead as the westerly change kicks in. Power outages possible.

Dovi's centre likely to come in around north Taranaki or Waitomo late this morning/lunchtime. pic.twitter.com/3owrlqxaVe

Meanwhile, large waves coming from unusual direction were also expected in the western North Island from Taranaki south and in Nelson and Tasman bays.

Waves up to 5m were also forecast for Hawke's Bay and the Gisborne area early tomorrow morning as Cyclone Dovi moves away from New Zealand.

Tomorrow would also signal a welcome weather change for many, as the switch to southerly winds brought a refreshing change for those previously suffering under a conveyor belt of high humidity from the tropics.

Overnight minimums would fall to early and mid-teens in the North Island, a big change from the minimums in the 20s Aucklanders and others had been experiencing last week.

"Once the low moves away tonight and into tomorrow we're getting into a much cooler southerly flow.

"The silver lining for Aucklanders is we'll see this air mass change and it'll be a whole lot easier to sleep going into the new week."

Meanwhile, while those in the north will be grateful for the few degrees of reprieve from the heat, one South Island alpine pass is expecting a bit more - snow.

In the six hours to 11am today between 3 and 8cm of snow is expected to fall near the summit of Lewis Pass, in the central South Island north-west of Hanmer Springs.

Lesser amounts of snow may also fall down to 800m, MetService said.