Up to 150 protesters have gathered in Auckland's Aotea Square for an anti-lockdown protest.

Sporting signs with messages such as "Stand up for freedom, we will not be silenced" and "Freedom's Rights Denied NZ Govt" they are milling together in small groups.

A speaker addressing the crowd said those gathered are not crazy people who follow conspiracy theories, however, everyone is free to think what they want.

He focused on the lockdown in Sweden - and attempted to discredit those who paint its handling of Covid-19's spread as bungled.

His comments drew claps and woos from the crowd.

Te Kahika made a number of health claims about Covid-19 and the studies he had read, without citing them specifically.

Another speaker said if someone is afraid of the virus they should shut themselves away and not force others to.

He said there were those who would walk on four legs and bark like a dog if the Government told them to.

Police are keeping a very low profile with only one masked and gloves officer immediately visible.

The group NZ Liberty March is behind the protest, which it says is to "raise awareness of the unintended consequences of lockdowns". 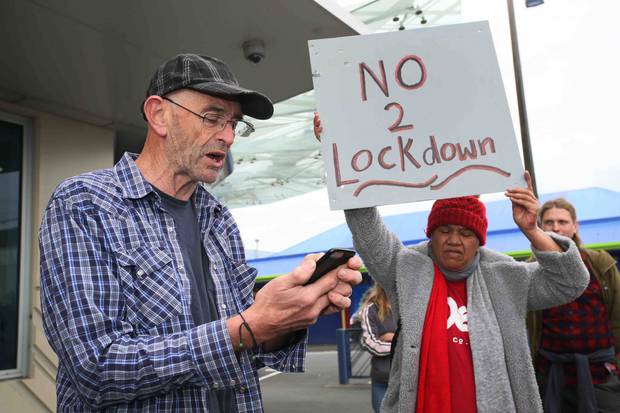 Organisers say they have been in contact with police, and urge those attending to follow public health guidelines.

"Public health is important. We therefore recommend that you should follow health instructions from our health ministers.

"We encourage all precautions that will help ensure public safety, like social distancing.

"If you are sick or have tested positive for Covid-19 within the past 14 days, we recommend that you do not attend this event."

People gathering are encouraged to assemble into smaller groups, no larger than 10 people.

"Police will be monitoring the situation and will respond accordingly," he said.

"Police recognise people's lawful right to protest, however we also recognise the need for people to adhere to the current level 3 restrictions to do their part to help prevent the spread of Covid-19.

"We strongly urge anyone considering taking part to adhere to all current restrictions in place."