Frightening footage has captured the moment two surfboards went flying off the roof of a range rover in Northland, nearly taking out a tailing car in the process.

On January 5 a range rover was travelling southbound on State Highway 1 at Uretiti in Northland.

But during its journey, the load on its roof came loose.

Dashcam from a car travelling behind captured the eye-opening moment the two surfboards on the car's roof were flung high into the air.

One of the surfboards came hurtling towards the travelling car, forcing the driver to swerve as it came inches away from smashing into the windscreen.

The tailing car's dashcam also caught the rear vision of the incident which shows more cars having to swerve the surfboards scatted over the road to avoid running over them. 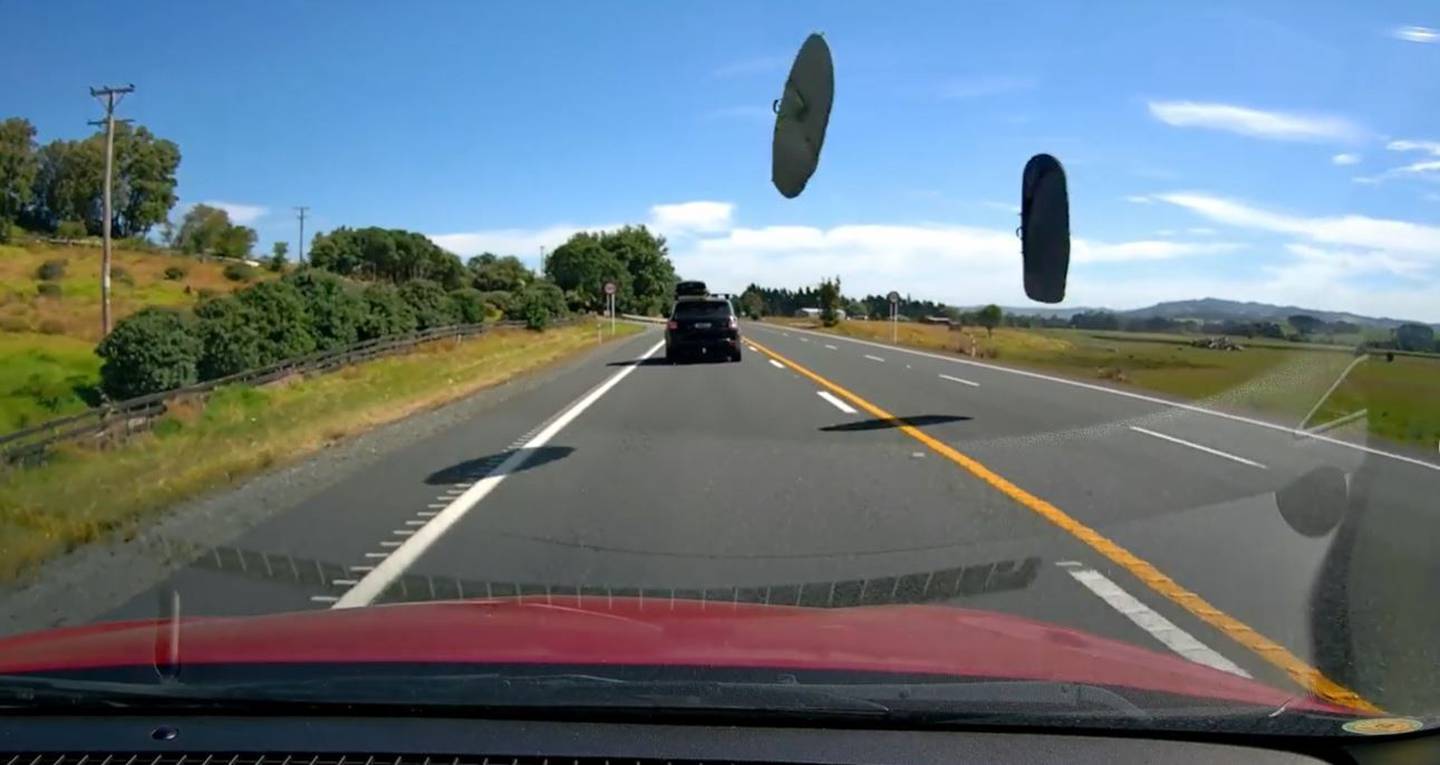 Two surfboards went flying into oncoming traffic, causing a number of cars to swerve out the way. Photo / Facebook

The driver came within inches of getting hit. Photo / Facebook

The man who came inches away from being hit told the Herald the incident could have turned nasty had he not swerved and believes the straps may have broken, causing the boards to come free.

"It would have hit us if I hadn't swerved. We were following them for a while, so I suspect their ties and straps broke."

Further footage showed the driver of the loose load pulling over after losing their surfboard.

The dashcam footage was posted online where a number of viewers weighed in on the frightening incident.

"That's some Final Destination shit right there," one person said.

The driver of the trailing car was also praised for his quick reactions to avoid a highly dangerous accident.

Waka Kotahi NZ Transport Agency spokesperson Andy Knackstedt told the Herald the incident in the video is a timely reminder to check your load is safely secured before travelling.

"It's very important that people take the time to ensure that anything they are carrying on the roof of their vehicle, or in a trailer or on a rack, is properly and safely secured.

"Any large or heavy object which comes loose from a vehicle travelling at speed on the road can become a dangerous missile or obstacle, putting other road users at risk."

Knackstedt also said those who don't secure their loads could face infringement notices and hefty fines.

"It's also a legal requirement in New Zealand to make sure any load you're carrying is secure and that it can't fall or escape from your vehicle or trailer. Any person loading the vehicle also has the same responsibility – not just the driver.

"You can be given a $600 infringement notice, or if you're prosecuted through the courts you can be fined up to $2000 and be disqualified for a period decided by the judge."