The duo behind a fiery vegan protest at an Auckland supermarket at the weekend are not about to stop their activism, and have plans for more action soon.

Anna Rippon and Deno Stock organised "a peaceful protest" at St Lukes Countdown on Sunday - in the hope of educating shoppers about animal cruelty.

They and about 18 others lined up in front of the meat chillers in store and handed out flyers to customers.

However, what they hoped would be a peaceful demonstration, got slightly heated when several shoppers were aggravated by their stance and lashed out.

"It was all planned out, we just hoped we wouldn't get stopped straight away and the whole thing would be a waste of time. But it went like clockwork really," Stock said.

"We just took a deep breath and did it."

The 67-year-old, who has been a vegan for two years and sports two vegan tattoos, said they were inspired by similar protests overseas. 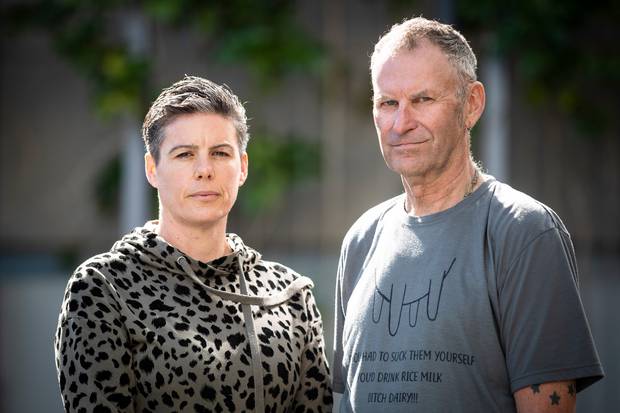 "We wanted to make people think about what happens before that little pack of meat comes to the supermarket.

"There is a lot that goes on before that which isn't the nicest thing to know," he said.

Stock himself became a vegan after researching slaughter houses and the dairy industry.

"For instance, when they leave the farm they don't get fed or watered because they want their stomachs to be empty when they slaughter them," he said.

"At the slaughter houses, they bolt gun the animals in the head to stun them and then hang them, slit their throat and let them bleed out – and most times they are conscious when that happens."

He has since been involved in vigils outside slaughter houses, many other protests, and the "stickering" of animal products in supermarkets earlier this year.

They placed stickers on products that said things like, "this packet contains the body parts of someone who didn't want to die".

Anna Rippon, a vegan since January last year, defined their stance as not just being vegan - but animal activist vegans.

"We wanted to go in and pay our respects to the victims in the chiller, while at the same time raising awareness to the general public – because in this day and age there is no reason to exploit animals for food," she said.

"It's too easy for people to ignore so we were creating a disruption to get people talking about it.

"It's planting a seed so people start thinking for themselves. It's a bad habit that needs to be broken."

Apart from a few people who got aggressive, Stock said most shoppers were respectful.

"Most people walked past, looked, took a flyer or walked passed respectfully," he said.

However, after the protest, the pair said they'd received abuse online - even from other vegans.

But Stock said the abuse was worth is because "it got everyone talking".

"I believe we did the right thing, and all the people we did it with - I am so proud of them," he said.

To the people who look at them and think they are crazy, the pair say it's a good opportunity to reflect.

"If they had seen what we have seen ... go and stand outside a slaughter house and watch the animals arrive ... boy that changes you," Stock said.

"That makes me stay strong and want to fight harder."