Soaking wet and freezing after being swept away in a swollen river, US tramper Chris Muse clambered to the river bank and considered his options.

He was alone, 10km from civilisation and low on food. He was also hypothermic and hours from death in driving rain.

He grabbed his personal locator beacon from his insulated pack and issued an SOS to authorities in Texas.

Nine hours later a search and rescue team arrived on foot. They were prevented from reaching him by the badly swollen Motueka River and they were forced to wait till the river subsided yesterday morning, communicating with Muse across the torrent by using hand signals.

"They said, 'Stay put. Do not move until we come to you'. They were going to send a chopper but given the weather it wasn't possible."

"That was a good feeling just knowing that people were across the river."

The 30-year-old from Atlanta, Georgia, had been in New Zealand for about three weeks and was a week into tackling the South Island leg of the Te Araroa Trail when trouble struck at Red Hills, in Mt Richmond Forest Park, on Tuesday morning.

An experienced river guide for an outdoor adventure company in Alaska, Muse was low on supplies and facing five more days of heavy rain.

Still 10km from the nearest civilisation of St Arnaud, he had already made six river crossings that morning when he came to the badly flooded Motueka River Right Branch and decided to try his luck once more.

Muse walked for about 1.5km looking for the best crossing point before wading into the swift flowing water.

"A boulder shifted towards me, took my feet out from under me and swept me towards the other side of the river."

He managed to reach the bank and hauled himself up then spent the next hour cold and wet, traipsing towards St Arnaud. But he realised he could go no further when he reached another impassable crossing.

As hypothermia set in he got into dry clothes, set up shelter and called for help. Eating his last rations - a tortilla with Nutella and some cheese - he waited to be rescued.

Muse said with the benefit of hindsight, he should not have attempted the earlier crossing but had been faced with a tough decision. 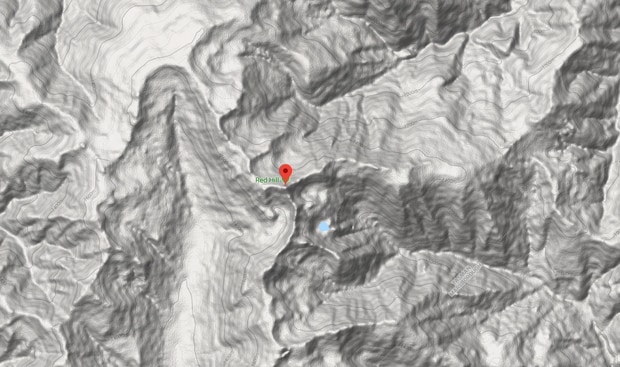 The US tramper was rescued from Richmond Forest Park by a search and rescue team. Photo / Google

"It was two hard choices. Stay put or continue and try to make the crossing safety."

He had thought: "I'm now facing five more days of rain. The rivers were not going to subside and I'm running out of food.

"I shouldn't have been crossing. I should have sat out the storm."

Speaking to the Herald this morning from St Arnaud, Muse thanked his rescuers and said he was fortunate to be alive. Despite his experience he'd reached his own limits.

He advised other trampers to be prepared and know when to call for help.

"Carry the right gear, keep a close eye on the weather and stay calm. And always carry an SOS device."

Undeterred, he planned to wait out the bad weather before pushing on with his solo adventure.

Senior Constable Reuben McCormack said Muse was swept downstream by the rapid current, but fortunately managed to get himself out.

When he became stuck between two impassable rivers, he realised he needed help and activated his personal locator beacon.

"The model of locator beacon the hiker was using is also capable of sending and receiving text messages, meaning he could send a text to his local rescue service [in Texas] to say he needed help. The rescue service in Texas then informed the Rescue Coordination Centre New Zealand [RCCNZ]."

Due to the poor weather conditions a helicopter was not able to be deployed, and Police and LandSAR volunteers were called in to assist.

Four LandSAR volunteers hiked to the man's location on Tuesday afternoon, but were unable to cross the river to reach him.

"The LandSAR volunteers recognised immediately that the river was too dangerous for them to cross," McCormack said.

"They set up camp on their side of the river, while the hiker set up camp on his side. By Wednesday morning the river level had dropped significantly and the team was able to cross to the hiker, assist him across the river, and walk him out of the park."

The successful outcome demonstrated the importance of being prepared and carrying appropriate equipment.

"Because the hiker was carrying a personal locator beacon, he was able to immediately notify authorities of his location and his need for assistance. And he was then able to set himself up in his tent and sleeping bag for the night, and wait until the river was safe to cross," McCormack said.

"I would also like to acknowledge the efforts of the LandSAR volunteers.

"They provide an invaluable service to our communities. Without their support, the hiker may have decided to try crossing the river again, leading to a tragic outcome."

The hiker has not been put off by his experience - once he has replenished his energy and food, he plans to continue his journey on the Te Araroa Trail.

For information about how to plan and prepare for hiking trips – whether you're heading out for a day trip or on a multi-day adventure - go to www.mountainsafety.org.nz