KEY POINTS:
• Two tornadoes have hit the North Island, damaging 20 homes and injuring two people
• 3200 lightning strikes today on land and over coastal waters, including 600 in the two hours to 5:30pm.
• Mt Egmont lashed with the most rain the last 12 hours with 30mm, while 23mm has fallen in Hamilton and 22m in Wellington over the last 6 hours.
• Top wind speed of 114km/h; 89km/h measured in an urban area
• Wellington flight delays expected as winds pick up
• 1000+ homes in Bay of Plenty without power
• Auckland, Northland get a breather before southwesterlies and more rain

The Northland sky turned inky black and went deadly silent moments before lightning pulsed and a tornado "let rip", damaging up to 20 homes.

The tornado struck Coopers Beach in the Far North, tearing a roof off a home, pulling sheds apart, and damaging decks and windows. Other parts of New Zealand have also been pelted by bad weather and at least two more tornadoes have hit.

A Fire & Emergency NZ (Fenz) spokesman said as at 3pm fire crews have now discovered 20 homes in the Coopers Beach area have been damaged, mostly superficially.

Two homes closest to State Highway 10 have been badly damaged, with roofs torn off and multiple windows smashed.

They have been declared uninhabitable by a Far North District Council building inspector.

The active weather system that caused so much damage in Northland has moved through Auckland and is now squarely over the Bay of Plenty, where hundreds of lightning strikes have been measured. 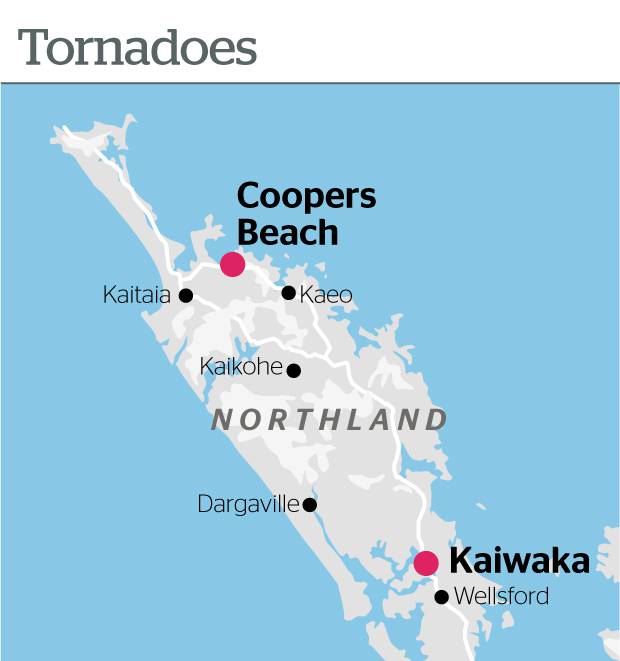 The occupants of the Northland homes are packing up what they can and will stay with friends in the area. Security guards will be posted until the properties can be made secure.

Fire & Emergency NZ said crews had now discovered 20 homes damaged in the Coopers Beach area, most of them superficially.

But two homes closest to State Highway 10 were badly damaged with roofs torn off and multiple windows smashed.

They have been declared uninhabitable by a Far North District Council building inspector.

Truck driver Craig says he witnessed the event, after first noticing a flash of lightning.

"I just saw this big tree go across the road in front of me. It was literally a flying tree that landed in the middle of the road." He said

He said local fire brigade is clearing the debris from the road now.

Bad weather is battering much of the North Island and Air New Zealand has also warned travellers there were likely to be disruptions to flights in and out of Wellington this afternoon.

While flights were currently scheduled to depart on time, the airline was expecting weather conditions to deteriorate and cause disruption to flights later today.

With poor weather forecast throughout the North Island, the airline was also recommending all customers booked to travel to or from a North Island airport check the arrivals and departure page on the Air New Zealand website for their flight status.

A Coopers Beach resident lost her deck railing and her neighbour's roof was ripped off in the weather event. Photo / Facebook

The airline said anyone booked on a domestic flight to or from Wellington from 1pm would be given ticket flexibility. Customers would be sent notifications about how they can make changes to their booking online.

A Coopers Beach resident has posted a photo of the damage to one house to Facebook with corrugated iron and planks of wood strewn across the property.

The homeowner also posted a photo of their trampoline getting thrown around during the storm.

The home's deck was also broken, with part of the railing broken off.

A Torsby Rd resident said she was sleeping from a night shift when she was woken by an almighty bang.

"[There was] a loud boom. The neighbours roof must have flown off onto my side and damaged my deck. Tiles are ripped of one corner of my roof and broken spouting."

She said no one was in the house at the time and believed it was a holiday home.

She described the house as having "major" roof damage.

Since the storm, police had driven around to affected areas to make sure all the residents were okay, including herself.

Another resident said the winds had since dropped and there was blue sky.

"[It's] blue sky at the moment and as still as anything," she said.

One resident said: "Roof off. Decking rails come off. Tramp upside down. Bushes ripped out."

Another resident wrote on Facebook that their neighbour's caravan had been flipped by the tornado.

Metservice earlier warned of tornadoes in northern and eastern areas and squally thunderstorms were expected across Northland, Auckland and Coromandel Peninsula in the morning.

Auckland Transport has warned commuters that the weather would cause delays and disruptions to ferry services throughout the day and into the evening.

The organisation also warned those cycling and walking to take care and watch out for debris with strong gales and heavy rain expected.

According to MetService, these thunderstorms may bring heavy rain of 10-25mm, and strong wind gusts of 90-110km/h, along with a low risk of localised downpours of 25-40mm.

"However there is moderate risk that some of the thunderstorms may become severe, bring localised damaging gusts greater than 110 km/h and localised tornadoes, especially to northern and eastern areas."

Wind gusts of this strength can batter trees and power lines, and may make driving hazardous.

According to MetService, if any tornadoes do occur, they will be localised.