From her hospital stroller 2-year-old Amirah Najim-Phillips waves her right hand in response to her family, puckers her lips to blow bubbles and shows off her nail polish.

These small gestures are a big deal for the toddler, who was left paralysed from the chest down and reliant on a breathing ventilator following a horrific crash a month ago.

But despite these glimmers of hope, last week her family were asked to make the heart-breakingly difficult decision whether to turn off her ventilator.

It's a decision her mother Daelyn Phillips, 23, and father Mohammed Najim, 21, initially questioned - as they feared the action would lead to her death.

But after her first test off the breathing machine yesterday, the family are elated Amirah has had 24 hours breathing on her own.

This morning Phillips told the Herald the breathing tubes were removed at 10.20am yesterday and so far they'd only had one scare.

"She started to breathe really fast and loose breath and get tired.

"The doctors know that she can breathe but it's a matter of time and for how long - as the main breathing muscles are gone as the nerves were effected in the crash," she said. 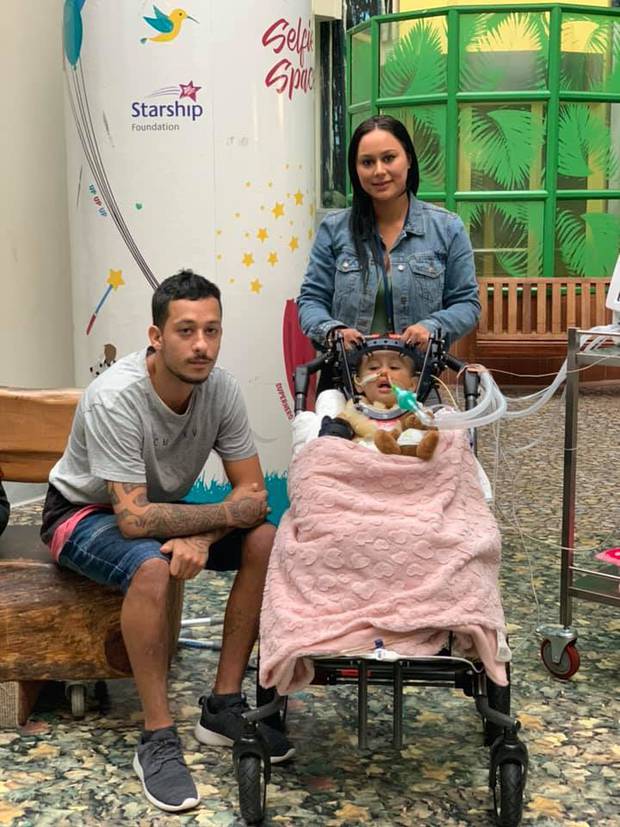 Phillips said doctors were concerned Amirah wasn't clearing secretions from her airways unaided, but a cough assist machine and suctioning were being used to help her.

"We are still so so proud of my baby and she is truly a super star," Phillips said.

"Last night was the first night I had ever walked out so so happy knowing she was showing what she could do. She's truly shown her strength.

"She was so awesome yesterday and will continue to be. We've even had a lot of doctors and nurses amazed at how well she was doing.

"She's definitely proving these doctors and nurses what she's made of and to never judge someone too quickly."

Phillips said Amirah would remain off the ventilator for a few days, and worst case scenario, if her airways don't improve - she will go back on the breathing support.

Two-year-old Amirah Najim-Phillips is fighting for her life in Starship ICU after a serious crash near Waiouru on June 13. Photo / Supplied

If Amirah doesn't continue breathing on her own, Phillips said she wanted the hospital to consider a tracheostomy and permanent support from a ventilator - as they had done for another Starship patient, Ana-Carolina.

Ana-Carolina was admitted to hospital when she was 6-months-old with a rare condition - a chronic form of Guillain-Barre Syndrome.

It means she is paralysed and requires the 24/7 support of a ventilator to breathe.

Her parents, Peter Bircham and Elane de Moraes Lobo, refused to turn of her life support. She is now 6 and has grown up in Starship Hospital's intensive care unit.

They have spent years battling the health system to be able to care for her at home - however, earlier this year she was given the green light to go home in late July.

Bircham and de Moraes Lobo told the Herald they would be "very willing" to help Amirah's family, but declined to speak about it publicly.

Wellington couple Phillips and Najim were travelling home from Auckland with their two daughters on June 13 when they were involved in a horrific accident on State Highway 1 near Waiouru.

An oncoming vehicle is believed to have crossed the centre line and smashed into the family's southbound car.

A month later, their youngest daughter Amirah is still fighting for her life in intensive care at Starship children's hospital and isn't expected to walk again.

The toddler was one of seven people injured in the two-car collision, which killed a baby travelling in the other vehicle.

Amirah broke her spinal cord in several places, meaning she is paralysed from the chest down and can only move her right arm. She also received various broken bones. 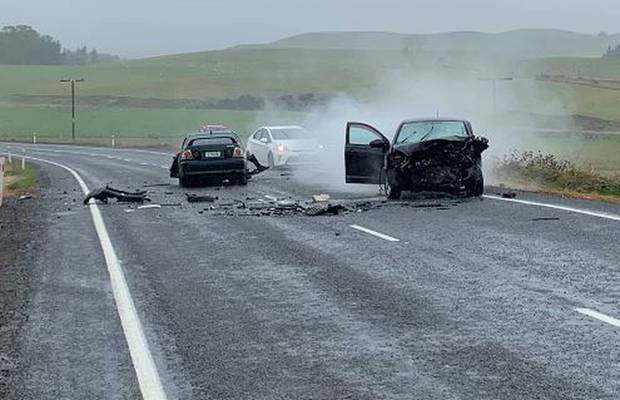 The head-on crash on State Highway 1 near Waiouru claimed a baby's life and left seven others injured. Photo / Supplied

She is in a halo brace to protect her spine and neck, and has been on a ventilator to support her breathing.

Mother Daelyn Phillips said her daughter did not have any brain damage so there was no reason to not keep her alive.

"She recognises all her family members, she can talk and move her right arm. She has normal facial expressions and she has all normal emotions," she said.

The family said they'd earlier found the hospital reluctant to keep her on long-term breathing support - but if it came down to it, they'd be willing to fight for her life.

The Auckland District Health Board said for ethical and privacy reasons it was unable to comment on clinical details of the specifics of care for any individual patient.

"Many have complex conditions and needs, and families face challenging situations and decisions that are unimaginable to most people.

"As clinicians, our role is to support families to make decisions together with our healthcare team about the care of their loved ones. This is a thoughtful, considered process that takes place over time.

"It can involve difficult and distressing conversations but it is very important our patients and their families have all the information they need to make informed decisions."

However, CCS Disability Action spokeswoman Melanie Gamble said no parent should be put in the position of having to fight for the basic right of their child to live on the basis of a disability that requires mechanical ventilation.

"No doctor can predict accurately how long someone can live on a mechanical ventilator, nor how good their life is going to be.

"Worldwide, many people are supported by long term mechanical ventilation to live meaningful lives as part of their communities."

In legal terms, Ron Paterson, a law professor at the University of Auckland, said life support cases were exceptional - with only a handful making it into court.

"My experience of ADHB, and any public hospital in this situation, is they are not just going to rush ahead and try and do anything without the parent's agreement.

"But legally, the position is that parents can't legally require the continued provision of life support by ventilation or artificial hydration and nutrition - if the clinicians generally believe that is not in the best interest of the child."

When disputes do happen, Paterson said there are a number of things the parents can do.

"One of the things is to get a second opinion from another hospital, or to get the case considered by the Ethics Committee at ADHB.

"But if they reach a complete impasse, then they can go to the court."

However, Paterson said it was still very early days in Amirah's case - and a prognosis probably wouldn't be clear yet.

"You can have all the best brains and really good doctors but the human body in an individual is a remarkable thing.

"I hope and pray for the best for this mum and dad."