The cheapest and most expensive regions to rent in the country at the moment have been revealed in a new report.

Figures released by Massey University for the December to March quarter show the average weekly rent on the West Coast is $251, making it the cheapest spot in the country.

While rent in a number of regions is increasing, it has decreased on the West Coast by 6.7 per cent since the last quarter and 4.2 per cent since last year.

That compares to the most expensive region, Auckland, which has a weekly average rent of $564 - a 5 per cent increase from the same time last year.

Despite Southland being one of the most affordable places, the region has had the largest yearly increase in rent prices – up 15.7 per cent to an average rent of $331 a week.

Rent has increased by 15.4 per cent in the Manawatū-Whanganui region over the past year to $367.

The report also shows renters are paying more than the national average, which is set at 100 per cent, in six out of the 16 regions. 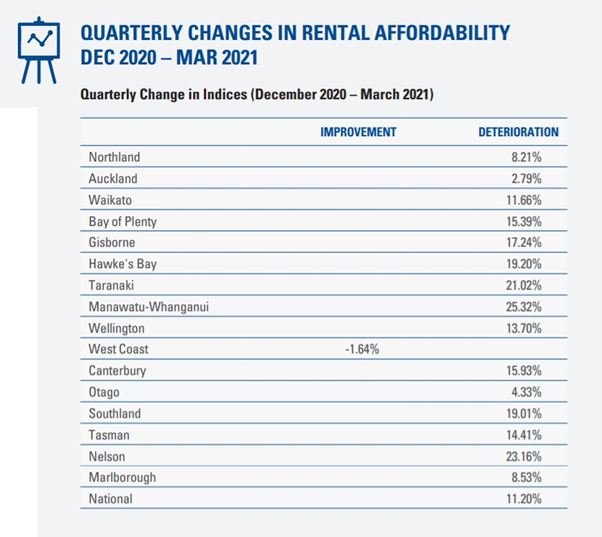 The remaining 10 regions are all relatively more rent affordable than the national average, but two regions stand out as being the most affordable for renters: Southland (77.1 per cent) and West Coast (58.7 per cent).

"These include interest deductibility on residential property income, the extension of the bright-line test, rent control and the end of the Covid-19 rent freeze," Squires said.