Two lots of tenants have been evicted from the same rental property after complaining about mould and dampness.

The current tenant, who asked to be known as Jaz, moved into a home on Hillsview Cres in Taumarunui in April with her two young children.

But it wasn't long before she realised the house was infested with cockroaches and mice; and was cold, damp and riddled with mould.

After complaining to the property manager, and requesting a health and safety inspection from the local council, Jaz was served a 90-day eviction notice.

She later found out she was the second tenant in 18 months to be evicted after raising concerns about the property.

"We also had issues with mould and dampness – and they didn't fix anything," Lunam said.

The couple were served a 90 day eviction notice in January 2018, after they complained about the lack of insulation and heating.

Water damage to the walls shown during Glynn Redshaw and Kelly Lunam's tenancy in 2017, and Jaz's in 2019. Photos / Supplied

"We'd asked them if they were going to do anything about the heating because we didn't want to be freezing and sick through winter again," Lunam said.

"By January nothing had been done and we received a notice to vacate so they could 'renovate and landscape'."

After being contacted by Jaz, the couple visited the property last week and were shocked at what they found.

"They threw us out so they could renovate the place, and all they've done is cut down a couple of trees, painted one window sill and installed insulation," Lunam said.

"We have photos they took in the inspections while we were there, and the issues are still exactly the same, like rotten spouting, no sealant around the bath, and no source of heating.

"Now they are trying to say it's a recent damp issue, but we asked them about it every time we had a house inspection, which was like every three months."

Jaz said she was "pissed off" that she'd been allowed to move into a house that both the owners and property managers knew, or should have known, wasn't healthy. 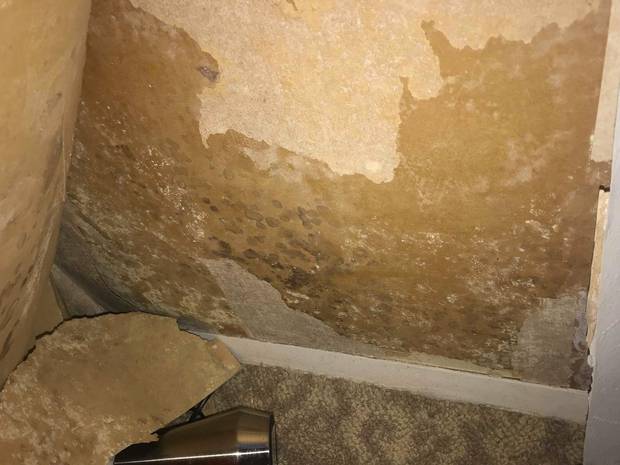 Behind the peeling wallpaper, Jaz discovered a think layer of black and white mould. Photo / Supplied

"Now I have brought up the exact same issue I am getting kicked out – and I think it's wrong," she said. "I don't believe it's fair.

"The owner clearly doesn't give a s**t about the tenants, neither does Harcourts."

From day one the house was not ready to be tenanted, Jaz said.

"There was no hot water coming out of the shower and I had to wait a week before this was fixed. I also caught eight mice in four days," she said.

After a few days she smelled an odd smell like "musty cat pee" and over the next two months she discovered the damp and mould.

"The curtains were disgusting, they were rotten and mouldy. In all the bedrooms the walls are wet and there is mould on the [ceiling], windows and in the wallpaper," she said.

She was then promised new curtains and a dehumidifier, which were installed on July 23 and 24. She also put bubble wrap over the windows to try and combat the condensation. 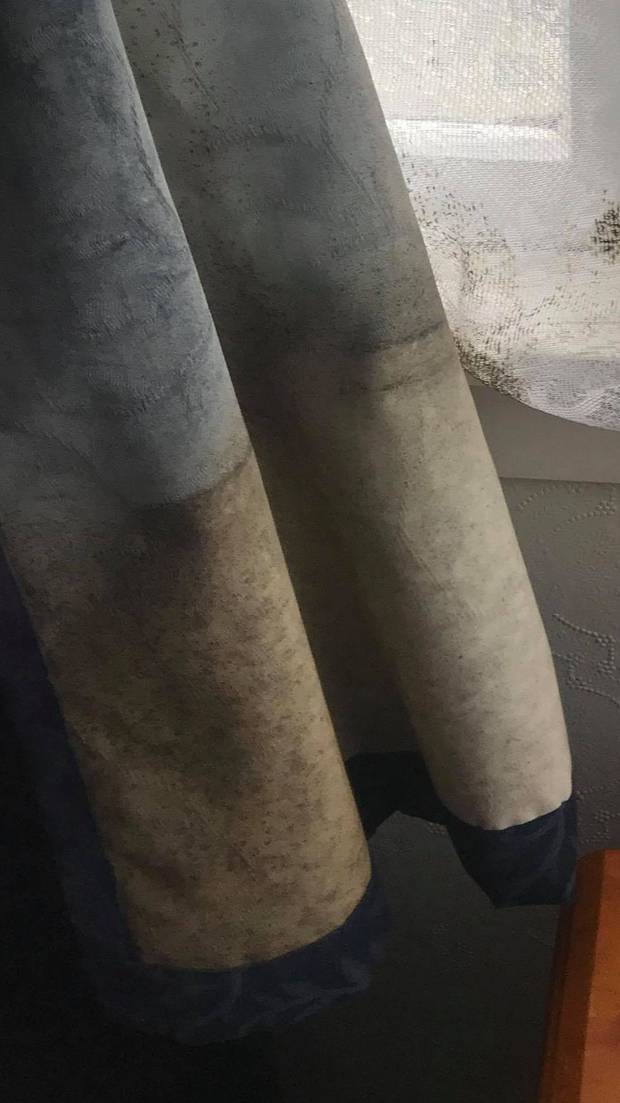 Soon after moving in Jaz discovered the curtains were covered in mould and smelled like 'musty cat pee'. Photo / Supplied

"On July 20 I was putting more bubble wrap on my bedroom windows and I decided to open the wallpaper that was coming off. I found black disgusting mould behind it.

"This could explain why my baby has a snuffly nose every single morning, my daughter has constant headaches, and we all wake up sneezing and with runny eyes," she said.

Worried about the toxicity of the mould, Jaz contacted Harcourts and Ruapehu District Council to see if a health and safety person could come and give her advice.

In her report, Harrison said she didn't believe that the mould is the more toxic mould Stachybotrys chartarum, but recommended testing to ensure this was the case.

"Although it is a possibility this dwelling may not be affected by the more toxic black mould, any exposure from any type of black mould can cause potential health impacts to the occupants as they are all capable of releasing mycotoxins," she said.

"Long term exposure to mycotoxins can lead to ongoing health affects causing allergies and respiratory illness or aggravate existing health conditions especially in those more at risk i.e. children or those who have low immunity."

Harrison believed the mould was likely caused by moisture entering the wall linings due to issues with the guttering and down pipe.

"I suggest that the issue has developed due to the lack of timely maintenance which has enabled the moisture to enter the wall linings," she said.

Three days later, Jaz was issued with a 90-day notice to vacate the property.

The notice said: "After careful consideration regarding the recently identified damp issues at the house, the owner requires the property back so he can work on it."

"I started crying because there are no rentals here, I'm not rich, and I'm a solo parent with heath issues," Jazz said.

"I paid about $3000 to get down here for the moving truck and a $1120 bond – now three months later I have to go look for another house. Now I am stressing I am going to be homeless." A broken down pipe at the property has also remained unfixed during the span of both tenancies. Photos / Supplied

Harcourts property management operations manager Jodine Clark said they were investigating the concerns raised by the tenant and awaiting test results from the mould.

"In the meantime we are taking all possible measures to reduce dampness and address the mould situation and curtains replaced.

"The source of any dampness is under investigation," she said.

The matter is going through the proper process to be addressed and reviewed by the Tenancy Tribunal, Clark said.

Ruapehu District Council said it had been advised Harcourts had sent a sample of the mould for testing and it expects the results back on Wednesday.

"If the test result does come back positive for toxic black mould the house would be deemed uninhabitable under the Health Act by Council and under the Residential Tenancy Act Harcourts (as the rental agent) would need to give the tenant seven days' notice," a spokesman said.

"Council's position is that all homes should be warm and dry and that people should not live in damp or mouldy conditions."

Ministry of Business, Innovation and Employment (MBIE) said it's tenancy compliance and investigations team's records didn't show that it had been contacted about this property.

"But the team will look into the concerns contained in the query," Jennifer Sykes, manager of information and education, housing and tenancy services said.

"Rental properties must meet all legal requirements regarding building, health and safety before being rented to a tenant, and must be in good condition, including being free from mould and dampness. This includes working smoke alarms, and ceiling and underfloor insulation where practicable to install it.

"During the tenancy, landlords are required to maintain the premises in a reasonable state of repair. Failure to do so may be unlawful."

A landlord may not give notice to end a fixed-term tenancy early, unless this has been agreed in writing by the tenant, Sykes said.

"A landlord must give at least 90 days to end a periodic tenancy," she said.

"It is a matter for the Tenancy Tribunal to determine what constitutes a 'retaliatory notice'."