A Gisborne couple were abducted by four men and repeatedly told they would be killed during a terrifying two-hour ordeal in the Tanzanian city of Dar es Salaam last week.

Chris Williams and partner Tiffany Zyp, both 31, were forced to give their abductors the PIN numbers to their credit cards.

The men drove them around, continuing their murder threats as they made repeated withdrawals at ATM machines.

The pair arrived in the eastern port city of Dar es Salaam on a bus from Nairobi just minutes earlier.

They needed a taxi to take them to a pre-booked safari trip in Zambia.

Once in the "taxi", the driver was suddenly joined by three other men.

Two of them pinned Williams and Zyp in the back seat. As the car took off along the dusty road the men shouted: "Give us the f***ing money. Don't try anything, tell us your PIN, the right PIN or you're dead".

The couple of eight years are on an extended overseas experience, having left Gisborne on April 19.

In an email to family after the ordeal and from the safety of a Nairobi hotel, Williams said it was a surreal experience.

At first it was hard to accept it was happening, even as one of the men tried to get him in a headlock, he said.

"In those first five seconds I registered no sound, it felt normal, like a Jiu Jitsu class ... 'OK he's going for the headlock, now shrug him off with your shoulder, turn in and choke him back, open the door'."

But the door had a child lock and he couldn't open it. The sounds of Tiffany's terrified screams filtered through as the men shouted they would kill them if they did not comply.

"I scooped Tiffany in as close as possible, stared down the man on her side to make sure he wasn't trying anything and then I complied.

"They ripped out my wallet, they counted my cash, they swiped my phone, they started flicking through my debit cards, all the while screaming and shouting at us 'f*** you, I'll kill you!'.

"My mind started racing through options, scenarios, one after the other, but the risk with Tiff there dominated all, (it was) far too huge ... so I just held on to her." 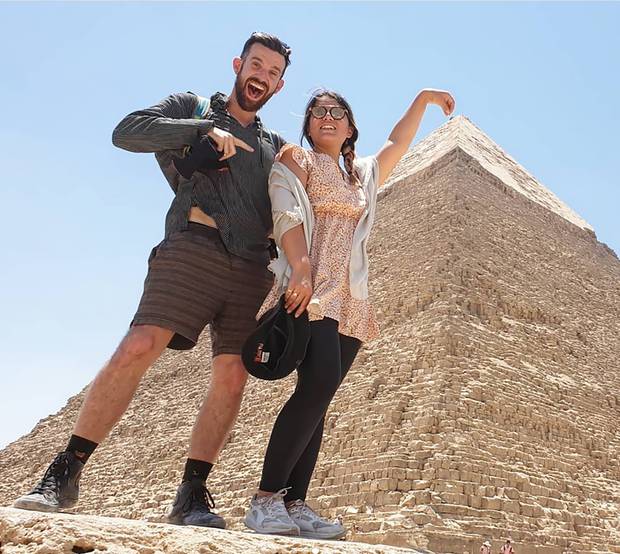 Chris Williams and Tiffany Zyp visited Egypt as part of their travels around Africa. Photo / Instagram

Shortly before, Williams had struck up a "friendly chat" with the driver, which ended with the man saying, "Can you help me with my business bro!? Take my taxi instead of Uber".

"I felt sorry for him and agreed."

Williams said it seemed the "terrifying ordeal" would never end as they drove through the gritty back streets of the large Tanzanian city.

The constant weight of one man was on his left side, the car was getting hotter and hotter, and it was hard to breathe.

The four kidnappers began to argue among themselves, screaming at each other in Swahili.

As they stopped at one ATM, Williams said he stared at the people walking by outside, desperately thinking, "read my eyes, read my eyes".

But the windows were tinted, nobody noticed.

He pretended to get cramp and started screaming and Zyp played along.

It rattled and confused the men but also made them anxious and angrier.

Finally, satisfied with their cash haul, the men gave them back their passports and wallets, and told them to "act normal when you leave or our friends will get you".

Williams tried to get their phones back but they refused.

One of the men opened the trunk of the car and threw their bags out. They then drove off. Williams tried to get the licence plate but the boot was still open.

"I wanted to run, tackle the guy that was running alongside the car ... but then she'd (Tiff) be alone. It wasn't worth it.

"It truly made me appreciate what I value most, and it's not money."

The couple went to a police station but they would not deal with them and sent them to another one.

An officer who took their statement laughed and said: "We have very bad people here." 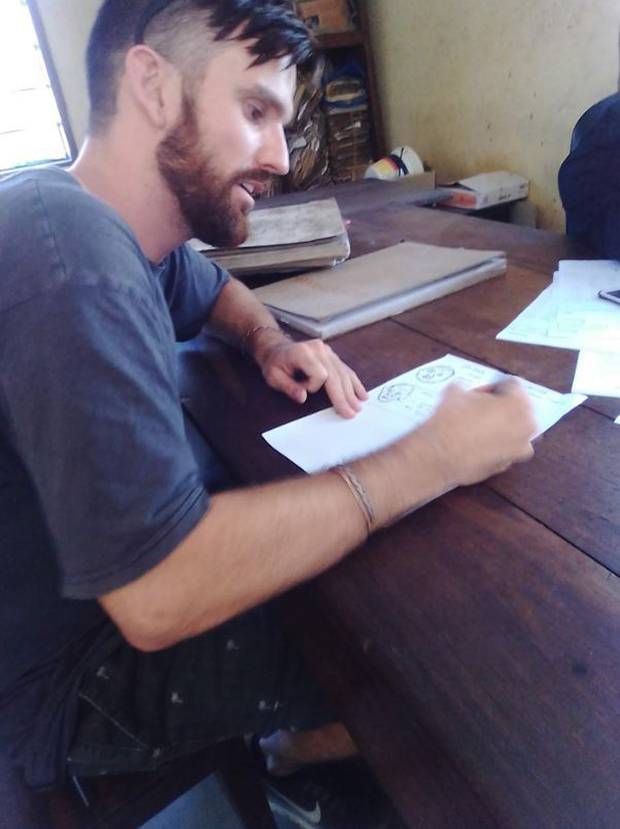 They called their bank in New Zealand and were informed that $4200 had been withdrawn.

After finishing their statements to police — they had to return the next day to complete the report — an officer drove them to accommodation.

"The owner of the lodge [Victor of Kays Lodge] was a very friendly man and was so angered by our story because of the effect it has on his business and the reputation of his country," said Williams. "He was very apologetic and it was lovely talking to him and hearing someone who cared."

Meanwhile, because Williams had not turned off his phone — he pretended to when told by the offenders — their route was tracked on Google maps until one of the men realised the phone was on and turned it off.

They had ATM withdrawal times, the journey they went on, the locations of the ATMs they went to. They asked the owner of the lodge if he would drive them around to find these. He took them to a friend, who happened to be a chief investigator.

As they retold their story, Williams started to scribble the men's faces.

He is a graphic designer, so his drawings were good.

"They started laughing at the two crude faces I had drawn, yelling out two names."

The two men were former police officers who had been fired for corruption and were under investigation.

"They had been caught out for repeated cases of waiting for tourists to exit ATM booths and questioning why they had so much cash, and harassing and confiscating it off them."

One had already been arrested and released on bail. 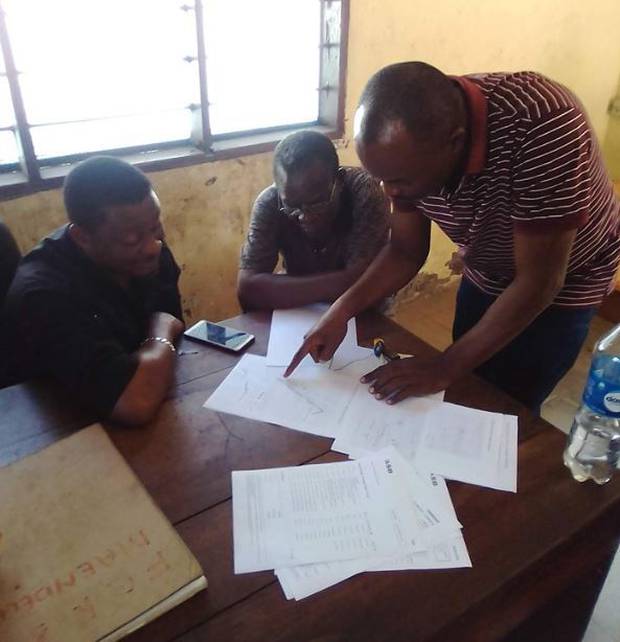 As Chris Williams had not turned off his phone, their route was tracked on Google Maps and he could give investigators the ATM withdrawal times and locations.

"The cops said if this stacks up it's over for these guys and they'll be in prison for 15 odd years due to their stack of cases. We were gobsmacked.

"It could be we were had by the suspects of the hotel owner's good friend's ongoing investigation. What are the chances?"

Williams said the four of them retraced their steps and tried to find out more but ended up running out of time as they had to catch a plane.

"It's hard to not to let a terrifying incident like that shape your opinion of a whole country and I knew in my heart to not let it get to me.

"Victor from Kay's Lodge is an absolute legend and restored our faith in this part of our trip."

But Williams will never forget the image of the man who tried to scare him the most during the ordeal.

"He screamed 'f*** you, I'll kill you' so many times in my face that the memory of his features are cemented into my mind."

The couple are in transit to Zambia and plan to continue with their travel plans.

It also shows that the Gisborne couple acted correctly in not resisting their abductors.

New Zealanders are advised to take extra care when travelling in Rufiji and surrounding areas and monitor the media to stay informed of local developments.

"Express kidnappings occur in Dar es Salaam, where criminals abduct a victim for a short period of time and force them to withdraw funds from their bank account at an ATM.

"This has been known to occur after tourists are befriended by strangers or when using unlicensed taxis. We advise against accepting unsolicited offers of assistance and recommend that you pre-book taxis.

"There is a particular risk of armed robbery and banditry in the provinces of Kigoma and Kagera, near the borders with Rwanda, Burundi and the Democratic Republic of Congo."

New Zealanders in Tanzania are advised to be vigilant at all times, particularly in places frequented by tourists.

"We advise against walking and travelling at night, especially to isolated areas.

"As victims of robbery are often targeted due to their perceived wealth, we advise against wearing or displaying items that appear valuable, such as mobile devices or jewellery.

"No resistance should be given if you are the victim of a robbery, mugging or carjacking, as this could lead to an escalation in violence.

"Make sure your residential property or accommodation is secure at all times, especially at night.

"When driving, you should keep doors locked, windows up and any valuables out of sight."