A teenager had to be rescued by Coastguard after trying to cross the notorious Cook Strait last night in a dinghy.

Police say the 18-year-old set off from Kenepuru Sound about 10pm last night and went through Pelorus Sound in a motored dinghy before crossing the Cook Strait.

About 9am today the teen contacted the Harbour Master, alerting that he had broken down off the Mana coast, but was unsure of his location.

Police were able to geolocate him from his cell phone and found he was about 12km west of Mana Island. A Westpac helicopter attended and directed police to his location.

The man was in a reasonably good condition, slightly cold but not hypothermic and was brought back to shore by police.

Harbour Master Grant Nalder said when he got the call he initially thought it was a hoax.

The teen told him he out somewhere near Mana, his dinghy had broken down, and was in need of a tow.

"He didn't actually sound stressed, he didn't sound panicky, he was almost very laid back and relaxed. He was quite casual about needing a tow."

Nalder said anyone on the water in distress should dial 111 to get emergency services moving more quickly and recommended they carry a personal locator beacon.

The man had not checked the weather forecast before heading out and was not an experienced seaman, Nalder said.

"I don't really advise small boats with no lights being out in the dark either ... There are better ways of crossing the Cook Strait, like catching the ferry.

"It was probably an ambitious journey shall we say."

Senior Sergeant Dave Houston said that while this was a good outcome and no one was injured, it was a reminder that the Cook Strait was a dangerous stretch of water.

"You need to have all proper safety equipment and be an experienced and capable seaman if you are going to make this coastal voyage.

"The conditions overnight were rough for a small dinghy.

"While the man did have a lifejacket on and carried his cell phone, he had not checked the weather conditions and was not an experienced seaman. Everybody going out on the water needs to remember to wear a lifejacket, check the conditions and only go out if it is calm and go out in daylight. 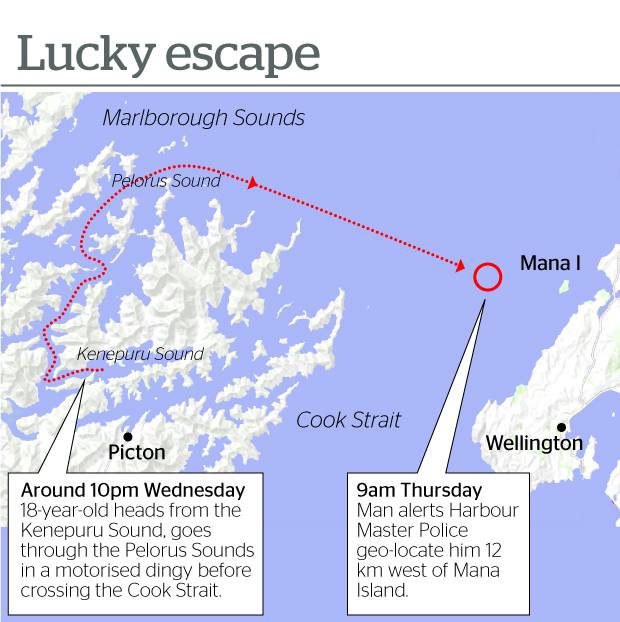 "If it wasn't for him ringing and us being able to locate him from his phone data it could have been a very different outcome," Houston said. 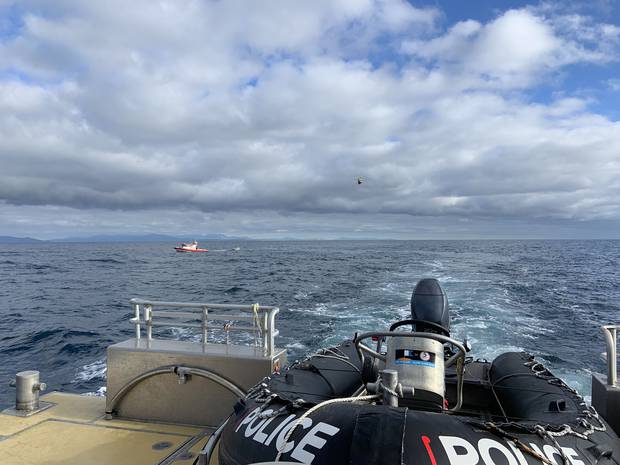 A young man has had a lucky escape after becoming stuck off the Mana Coast following an overnight trip across the Cook Strait in a dinghy. (Photo / NZ Police)