Police have been cracking down on surfers on Auckland's west coast today after all water-based activities were banned during the Covid-19 lockdown.

The Ministry of Health issued a Health Notice yesterday which clarified that swimming, surfing, fishing and boating were not permitted while New Zealand was on alert level 4.

New Zealanders had previously been advised not to take part in these activities during the Covid-19 lockdown but the ban was made official in fresh laws released by the ministry.

That more explicit guidance has not yet got through to some surfers.

Police - who have been monitoring surf cameras to detect rule-breakers - turned up at Piha Beach this morning, where about six people were in the water.

"They just went straight down to the beach and called the surfers in," said a Herald photographer at the scene.

"Then they gave them tickets. Another guy was just drying down in the carpark and he got a ticket too."

AUT journalism lecturer and Muriwai resident Richard Pamatatau said he saw two people out surfing at the main beach during his morning walk today, and another person preparing to head out into the waves.

At Maori Bay, south of Muriwai, another six to eight people were surfing. 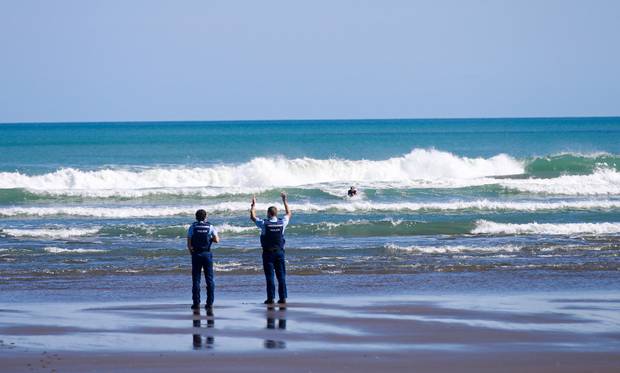 Police calling surfers out of the water at Piha Beach this morning. Photo / Alex Burton

Pamatatau said people had been surfing since the lockdown came into force last week, possibly because the isolation guidelines had not been clear.

"But certainly the announcement yesterday made it really clear that surfing is now a restricted activity."

It was frustrating for those residents who had been following the isolation rules, he said.

"Lots of us would want to be in the surf, that's obvious. But for the good of the country, we just have to adhere to the level 4 lockdown.

"Those who continue to flout the restrictions in any form are playing on the good nature of most of us.

"That's just not good enough. Any one of those people outside their bubble will want the same care and attention from the medical system, from the social welfare system, from the Government and a slew of handouts.

"But they are not behaving like this rest of us ... I think it's time for people to grow up a little bit."

Rodney Local Board chair Phelan Pirrie said there was a "steady stream" of cars heading to the beach this morning with surfboards attached.

He had been told about confrontations between angry residents and surfers who were flouting the lockdown rules at Muriwai and Piha.

"They're just being defiant. People have contacted me and said they're aware of the [rules] but they're just not interested."

Pirrie said that if anything went wrong in the surf at Muriwai, it took a large number of people to respond.

"Surfers do get into trouble. We had an incident here a couple of weeks ago where a good, experienced surfer was seriously injured."

The gates to the Muriwai Beach had been locked to prevent four-wheel-drive owners from driving on the sand during lockdown, but the padlocks had been cut through.

Auckland Council was now planning to block Coast Road to prevent 4WD access. There were also plans to block off the carparks at the beach.

The ban on water-based activities was introduced because of the risk of people needing assistance, which could require others to come into close contact, or for under-pressure medical services to be pulled away to treat preventable injuries.

Police Commissioner Andrew Coster said yesterday that most New Zealanders were very aware of what they could and couldn't do under alert 4 and were doing a "tremendous job".

"We want people to stay safe, but if a small number of people persist in deliberately flouting the restrictions, police will have the discretion to warn or, if necessary, to arrest.

"The Health Notice makes it clear what types of outdoor exercise and recreation people shouldn't do. Outside of that, we are asking people to stay local, apply common sense and not do anything that could risk exposure to injury or require search and rescue services."