Another sprawling plume of smoke and dust stretching across the Tasman Sea from fire-ravaged eastern Australia is set to blow smack into Northland tomorrow.

But Niwa forecaster Ben Noll said the plume would be at its dustiest – when particulates in the air peaks – at around midnight Wednesday, when people were asleep.

"Given how fast the air flow blows this stuff through, we expect it to track across over a period of six to 12 hours."

5-day animation of smoke & dust from the #NSWfires: another plume is expected to move across New Zealand's North Island late Wednesday 💨

It has also infiltrated New Caledonia and southern Vanuatu. pic.twitter.com/1STQfuh0Od

The plume may be visible in northern parts of the country on Wednesday evening – potentially in the form of reddish sunsets – depending on how much cloud cover there was in the sky.

Noll said this effect was the result of sunlight hitting particles in the atmosphere, creating something called scattering.

This sent some of the light's wavelengths off in different directions, and happened millions of times before that beam reached our eye.

"Dust particles can help to create more scattering in the mid and upper atmosphere, which can increase the vibrancy of sunsets and sunrises," Noll explained.

"A good example occurred in Whangarei on Sunday evening. However, if the dust sits low in the atmosphere, it can actually have the reverse effect, leading to muted sunsets that are less colourful."

As the Australian bushfires continued to burn, plumes of smoke and dust would be continuously dispersed into the atmosphere.

"This will happen until the fires are put out. Since the prevailing wind direction is westerly, it is blown eastbound toward New Zealand and some of it is even making it into New Caledonia and Vanuatu."

The science of smoke

That the plume could make it more than 2000km across the Tasman wasn't surprising – smoke impacts from big wildfires were even known to circle the globe.

There were several layers in our atmosphere and each layer has different transport winds.

It was these winds that determined smoke plume direction, speed, dispersion – or how concentrated or diluted the plume will be - and how far downwind the smoke would travel.

While smoke released near the ground can be influenced by terrain, smoke released from large fires like those raging across New South Wales, tended to be released very high into the fast transport winds that hauled concentrated plumes thousands of kilometres downwind.

"This is why we sometimes see smoke travelling downwind in two different directions."

That Queenstown had already seen some of the fall-out from the fires, with ash falling from the sky, showed the scale of the fires was large, and that the upper air atmospheric transport winds were blowing strong.

But it also suggested the wildfire behaviour was extreme – and that there was a likely "pyro-cumulous" formation, where fire actually created its own weather.

"The reason for such large particles to be transported means that the smoke must have been emitted very high in the atmosphere into the fast transtasman winds that are high above the surface," Strand said.

"To get the smoke that high a lot of energy is needed from the wildfire, indicating a large wildfire and a lot of heat generation. This usually results in a pyro-cumulous cloud forming above the fire." 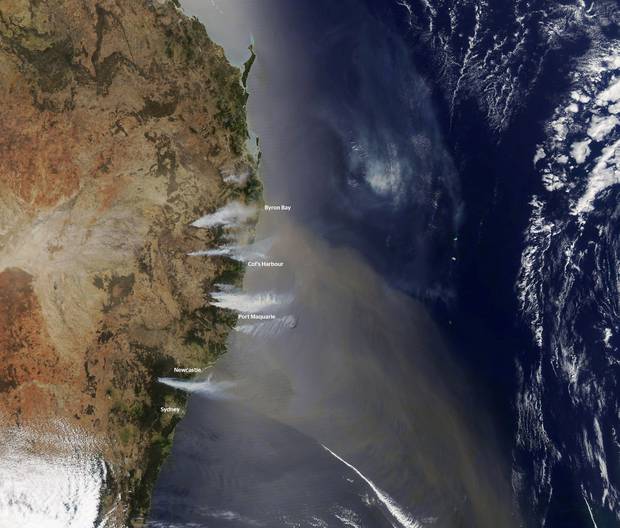 This satellite image, taken from the NASA Earth Observatory, shows the extent of fires burning across eastern Australia. Photo / NASA

Should we be worried?

Smoke - in particular, the particulate matter smaller than 2.5 micrometres (PM2.5) that makes up the majority of the smoke plume - is recognised globally as a pollutant due to its human health hazards.

Particulate matter smaller than 2.5 micrometres could make it past our body's natural defences that filtered out particles - like the hairs in our nose - and go deep into our lung tissue, potentially even entering our bloodstream.

Long exposure to smoke wasn't recommended for anyone – and people with sensitivities like asthma needed to be careful even in light smoke.

"For New Zealanders, our wildfire smoke exposure is likely to be minimal with the majority of the smoke aloft or very dilute, giving us spectacular sunrises and sunsets but no real large health impacts," Strand said.

"But people should take caution if they feel they are impacted by smoke.

"The local health officer can assist with guidelines on what to do if exposed to smoke and of course, seek your GP if you feel ill or the hospital if you are having a medical emergency."