The police officer who was slain in a shooting incident in west Auckland yesterday was Constable Matthew Dennis Hunt, aged 28 of Auckland.

Constable Hunt started with Police as a member of Wing 312 on 30 October 2017. He spent the majority of his career working frontline at Orewa and Helensville Stations before recently moving to work in our Waitemata Road Policing Team based at Harbour Bridge Station.

Yesterday, two West Auckland police officers had chanced upon a car that was flagged as being of interest, connected to potential criminal activity.

The officers turned on their lights, sirens and signalled for the car to pull over at 10.28am but soon lost sight of the car.

They then found it crashed on Reynella Drive, off Triangle Rd, one of the main arterial routes in Massey. There were two people in the vehicle.

A man got out, armed with a long-barrelled firearm and fired repeatedly.

One of the officers was fatally shot while the other was wounded.

The man then got into a silver Mazda Demio nearby — with a second person — and they took off.

At some point in the day one of the fleeing cars struck a member of the public, injuring them.

A police manhunt fanned out across the region, closing streets.

At 1.45pm, Coster was tasked with delivering the news of the first police officer killed on the front line in 11 years.

In Wellington, he booked a flight to Auckland to offer his support.

By 5.30pm, he was at the Henderson police station telling media they had two people in custody and had recovered a firearm.

Officers across Auckland would remain armed until Coster was confident the "right people are in custody".

"Our priority is to hold this offender to account," Coster told media.

"I ask that you keep this officer's family in your thoughts, as their loved one will not be coming home tonight." 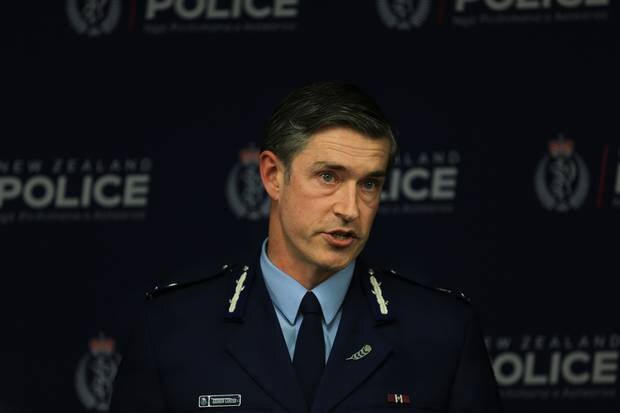 "We all know being a police officer is a risky job, but officers live with the expectation that they will go home at the end of their shift," he said.

"Their families live with that expectation too, and they have every right to see their loved ones home safely."

Cahill said the killing demonstrated risks to officers in "everyday routine policing" and highlighted the dangers of the "proliferation of firearms in the hands of criminals".

"It is an absolute tragedy that the very people who run towards danger to keep us all safe, can end up paying the ultimate price in the line of duty," he said.