A bill allowing police to enter marae without a search warrant "smacks of discrimination" an iwi spokesman has told MPs.

National Iwi Chairs Forum spokesman Rahui Papa told the Epidemic Response Committee this morning there was a "growing feeling" that the efforts of the Government are undermining iwi.

"While we are doing our part to look after each other in our communities, there is a growing feeling that the efforts of the Government are determined to undermine iwi, whānau and hapū.

"The Public Health Response Bill that is before the house today singles out maraes and employs a totalitarian enforcement right and above all smacks of discrimination. There are some phrases being coined around that this is an affront to our way of life. It is also an attack on our way of death." 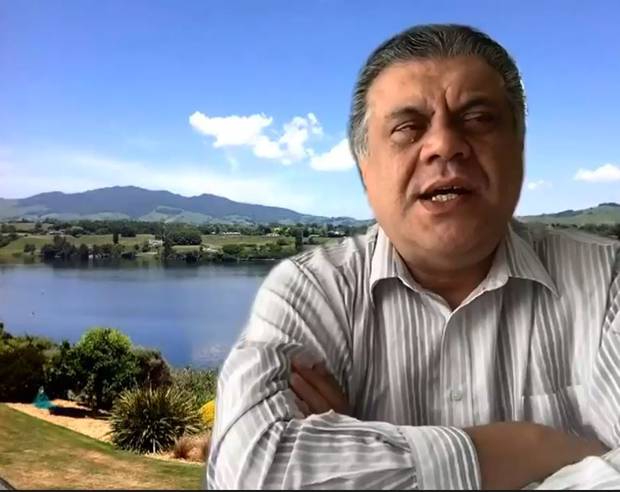 Rahui Papa during the Zoom meeting with the Epidemic Response Committee. Photo / Supplied

He said Governor General Dame Patsy Reddy officially pardoned 20th-century pacifist Rua Kenana in December for "exactly the type of situation that we are getting into now, that police entered the marae without warrant and without cause and caused havoc that brought an apology some 105 years after the event".

In 1916, the Crown invaded the Tuhoe prophet's settlement in Te Urewera and accused Kenana of trying to stop Māori men being conscripted into the armed forces.

"It is very disappointing that Māori are being viewed as different and can't control our own spaces, especially in a tikanga space as it related to marae and as it related to tangihanga," Papa said.

"Māori have been protecting their people for generation upon generation and we don't see that we should be singled out in any of the bill. Marae are particularly singled out. There are no provisions for other entities.

Papa said "very much so".

The limit of 10 people for a tangi was "ludicrous", Papa said.

"You can have people on a rugby field that smash each other over and then can't shake hands afterwards. There are some inconsistent messages."

Prime Minister Jacinda Ardern said this afternoon she had instigated calls between church leaders, funeral directors and iwi leaders to see if they could find a way to address legitimate health concerns while recognising funerals and tangi were life events which couldn't be postponed.

They were "well on their way" to finding a solution and the Health Minister would have more information on that this afternoon, before the country moves to alert level 2.

The Government was still working through the details. Ardern said they had always been agile and acknowledged the difficult times Kiwis were going through. She urged that "there will still be restrictions".

The Māori Party's Co-leader Debbie Ngarewa-Packer said this morning she was "gravely concerned about the bill's provisions that propose to increase police powers including the suspension of the search warranting process".

"This is fundamentally undemocratic and a clear case of state overreach.

"This legislation represents one of the biggest breaches of our fundamental rights as tangata whenua and citizens of Aotearoa that we've ever seen. The state having unlimited powers to enter marae is simply unconscionable.

"Whānau, hapū and iwi Māori have demonstrated that we are capable of keeping our own communities safe during this crisis. This provision is driven by the idea that the state has complete authority over our people when this is clearly not true – Te Tiriti o Waitangi guarantees our tino rangatiratanga."

Bridges asked about the future of the hongi.

"It will come back," Papa said.

"We have put it aside for now but this is a temporary measure that Māori have made the call on. It hasn't been because of Ministry of Health guidelines or Government guidelines."

Meanwhile, he said iwi have shovel-ready projects that the Government should prioritise.

At the end of the day, Papa said iwi must be involved in the economic response going forward.

Papa was challenged on his comments that the Government is not working with iwi by Labour's Tamati Coffey and Kiri Allan, who pointed to a number of initiatives where Māori and the Government have partnered over Covid-19.

But Papa said those checkpoints would not have gone ahead without iwi proactively leading them, while MPs squabbled about them.

Allan disagreed, saying that the Government was supportive and police helped with the checkpoints.

She said the checkpoints were "well supported" by the Government and were not an "after thought", as was insinuated by Papa.

Papa said he was disappointed to hear negative comments about the iwi checkpoints from National.