Regional Economic Development Minister, and outspoken NZ First MP Shane Jones says he is toning down his approach to politics so his personality does not eclipse his policies.

This comes after a word from Prime Minister Jacinda Arden, who Jones said told him that sometimes, "no news is good news".

Jones – who often refers to himself as the "provincial champion" – frequently makes headlines for his boisterous comments and political stunts.

This time last year, for example, he wore a high-visibility vest to a select committee.

He has also been critical of a number of Kiwi companies, including the Warehouse, Air NZ and Fonterra – the latter two he has gone as far as calling for the resignation of their top brass.

But speaking in a select committee in Parliament this morning, Jones promised to tone it down.

In fact, he only referred to himself as the "provincial champion" twice in the hour and a half long committee.

"I have tried to tone down my approach to this fund [the Provincial Growth Fund] to ensure the way it's operated is not completely eclipsed by my political personality."

But, in his next breath, he said, "there is no guarantee this will happen".

"As the Prime Minister suggested to me – no news is good news.'"

Despite his comments, he still took the unusual step of wearing a KiwiRail cap to the meeting with his name embroidered under the logo.

NZ First leader, and Deputy Prime Minister, Winston Peters said Jones' approach was correct and had made a "brilliant statement".

"With policies so brilliant, you don't want them overshadowed by rhetoric."

During the select committee, Jones was grilled on how much money from the Provincial Growth Fund (PGF) had actually been spent so far.

A written question, provided to National's Paul Goldsmith by Jones, showed that as of March 20, just $62 million of the PGF had actually been paid out to projects.

That compares to the $1.8 billion funding that the PGF has allocated so far. 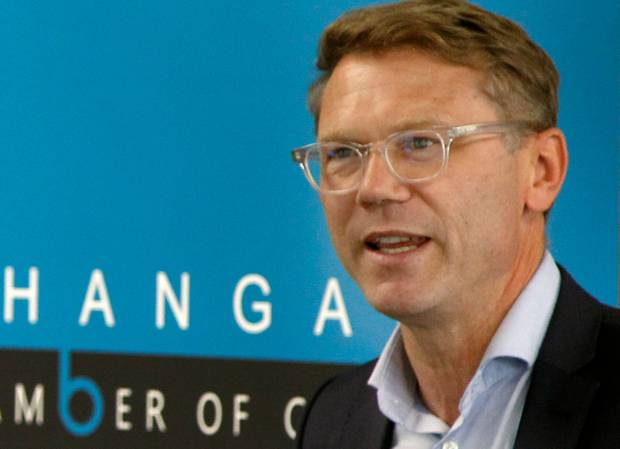 National Party MPs Paul Goldsmith: "Jones is very quick with the PR and very slow with the cash".

Goldsmith said the $62 million has been a dribble compared to how much has been allocated.

"We're 20 months in, and we have only so far seen $62 million actually paid out.

"Jones is very quick with the PR and very slow with the cash."

But Jones said since that figure was released to Goldsmith, the total amount of PGF funding that had actually been paid out was between $200-$300 million.

Asked in the select committee if he was happy with the progress, Jones said there was "always scope for improvement".

Speaking to media after the meeting, Jones said he did not want to dance on the head of a pin when it comes to how much has been spent.

"I want to see a hell of a lot more of this putea [money] actually going into the economy, circulating with velocity.

"If we haven't managed to get the putea starting to race with velocity around the regions, then that's a fair cop and I'm going to address that."

In terms of the future of the PGF, Jones was very confident that if New Zealand First is part of the Government after the 2020 election, the fund will return.

"If we are restored to power – then we are not going to give up on our mission which is provincial in character," he told media after the meeting.

Asked how he could be so sure – he said: "Because I back myself".