The Brothers volcano is huge - it's about three times the size of White Island and its summit rises to within 1200m of sea level - and it sits thick in one of the most active regions of the planet, the Kermadec Arc.

In a bold first, scientists will soon attempt to drill directly into the beast's belly - meeting rocks as hot as 400C as they go.

The two-month-long international expedition, setting out from Auckland this week, will drill three boreholes into Brothers - one of them planned to reach a depth of about 800m into a cone growing up inside the submarine volcano's caldera.

The other two will reach depths between 400m and 570m at the top and base of the caldera walls, respectively.

Led by the 23-nation International Ocean Discovery Programme (IODP), the $21 million project aims to learn more about how metals move through the Earth's crust, while gaining new insights into local life forms somehow able to survive in such extreme environments.

All magmas contained small amounts of metals, he explained, but the magma and resultant volcanic rock at Brothers was unusually rich in metals such as copper, gold, silver and molybdenum.

"We don't really know the full range of metals and in what quantities we will find at Brothers, or even how they are distributed within the volcano," he said.

"But if the chimneys sitting on the seafloor are anything to go by, we suspect we will see networks of veins beneath the seafloor that will be host to significant copper, zinc and gold mineralisation.

"This voyage will increase our understanding of where these metals come from and how they accumulate in submarine volcanoes, which may help in the extraction of these economically important and critical metals in similar settings worldwide." 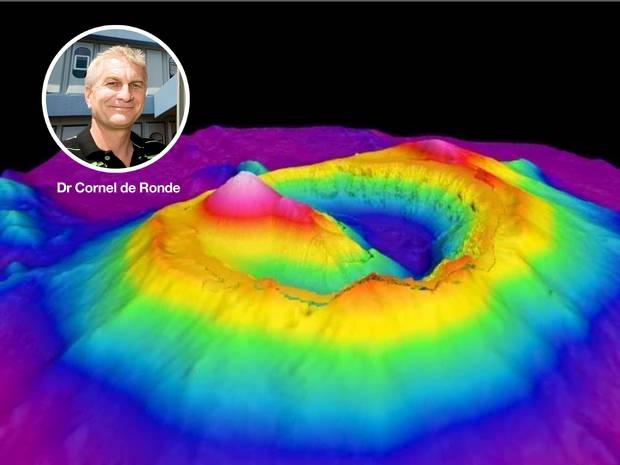 "Chemical reactions between rocks and seawater at depth in the volcano change the chemistry of the fluid that is released through hydrothermal vents into the ocean."

It was further likely the team would discover microbes completely new to science.

The hundreds of vents and chimneys, some as tall as 20m, that discharge fluids ranging in temperature between 10C and 310C were focal points for a wide range of marine life from microbes to tubeworms.

As well as tolerating temperatures as high as 120C, some of the micro-organisms were happy to live in fluids that are as corrosive as battery acid - and examining their tolerance could ever help biologists better understand how life started on early Earth.

The expedition is being carried out by the deep-sea research ship JOIDES Resolution, which just helped establish a new sub-surface earthquake observatory off the coast of Gisborne.