The driver of a school bus who died after a crash at Bunnythorpe yesterday might have been blinded by sunstrike, says Uzabus managing director Justin Allan.

Ambulance staff assessed about 40 patients, including Feilding High School students, at the scene early yesterday. The students' conditions varied from moderate to minor.

However, the driver died of her injuries.

"It's been a huge shock for everyone here. We're a pretty close-knit team, so to have something like this happen is quite devastating," Allan said. 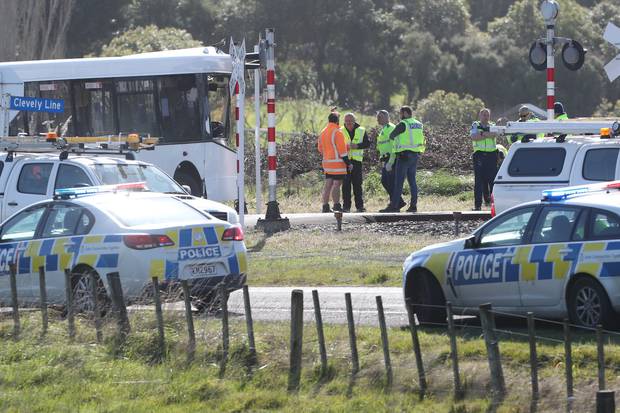 Police at the scene where the driver of a bus carrying students to Feilding High school was killed in a level crossing crash near Bunnythorpe. Photo / Bevan Conley

"The driver, she has been with us about three or four years so a solid part of the team, so very upsetting."

The company is working closely with authorities to find the cause of the collision with the train north of Palmerston North, just before 8am.

An internal investigation will consider the vehicle, the driver and there will be a review of the stop at the railway crossing at the intersection of Railway Road and Clevely Line, Allan said.

The driver was "very familiar" with the route, he said.

"There has been some mention of sunstrike being a contributing factor."

Seven people were taken to Palmerston North Hospital's emergency department after the crash and two were still in hospital last night.

"There have been some communications with the school and clearly the children... that were on board were pretty shaken up," Allan said.

"We're blessed really that there weren't more serious injuries for the passengers on board."

The driver was well known by the children and would be missed, he said. 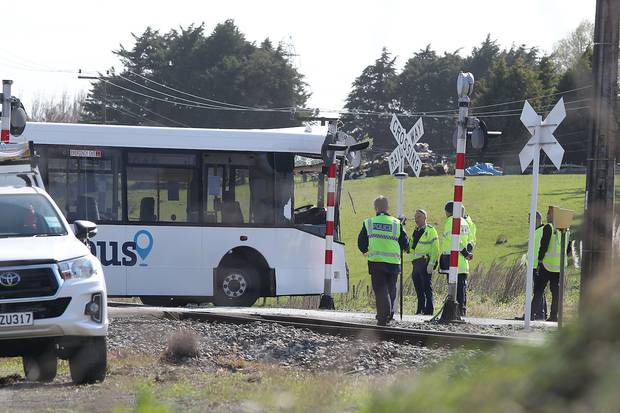 Police at the scene where the driver of a bus carrying students to Feilding High school was killed in a level crossing crash near Bunnythorpe. Photo / Bevan Conley

"The driver she was very passionate... she loved her kids. They will certainly be feeling this, without a doubt."

KiwiRail chief executive Greg Miller said the train driver was the only person onboard the train when the crash occurred. The train driver was not physically hurt, but was shaken by the crash, which caused minor damage to the train.The level crossing where the crash happened is protected by flashing lights and bells, but Manawatū District Mayor Helen Worboys said it was one of several high-risk areas where roads intersected with rail.

Miller said a car and train narrowly missed at the crossing in 2011, but there had been no other accidents there in the past 15 years.

The Transport Accident Investigation Commission and WorkSafe have started inquiries into the causes of the collision.