A member of the New Zealand SAS has died after a training accident in Auckland.

The trooper was taken by helicopter to Auckland City Hospital, where he was later pronounced dead, last night.

The soldier's family has been informed and were being supported, the New Zealand Defence Force said in a statement.

Police confirmed they were notified about 10pm.

Detective senior sergeant Malcolm Hassall, of Counties Manukau police, said they were investigating a "sudden death incident" on behalf of the Coroner involving a member of the NZ Defence Force, following a training accident at Ardmore last night.

"Worksafe NZ has been advised and there is no further comment at this time."

Police were now investigating on behalf of the Coroner, while the NZDF would hold a Court of Inquiry.

The NZDF said it wouldn't be releasing any more information while next of kin were being informed.

The SAS opened a new $46 million training facility at Ardmore in 2016.

The Defence Force is currently conducting a counter-terrorism exercise with a United States Army Aviation Regiment.

The exercise involves a large number of military personnel, including special forces from both countries.

Elements of it are being carried out in central Auckland, Whenuapai, Kaipara, Papakura and Waiouru.

It involves day and night flying, as well as live firing within the Kaipara Air Weapons Range.

The training exercise involves a large number of soldiers and air force staff and feature Black Hawk and NH90 helicopters.

Its design was to "practice counter-terrorism integration techniques between the two countries", the spokeswoman said.

The SAS is NZ's elite fighting force. In four years from 2013, there were 243 candidates and only 31 succeeded.

Members of the NZSAS have conducted operations in a diverse range of places, including Malaya, Borneo, Thailand, Vietnam, Bougainville, Kuwait, East Timor, the Solomon Islands and Afghanistan. 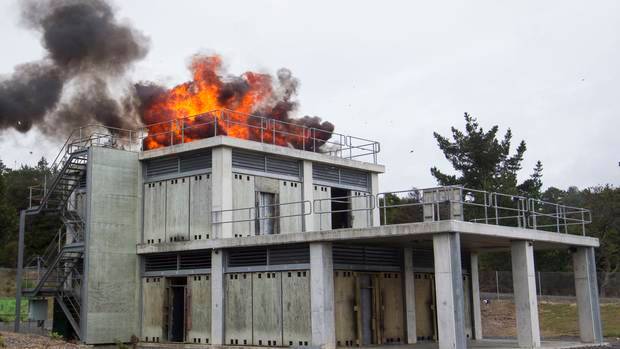 "Our deepest condolences and sympathies go to the family of the New Zealand SAS trooper killed in a training accident last night. As the Police and New Zealand Defence Force are investigating the incident, I have no further comment to make at this time."

Many Auckland residents heard helicopters over the city last night that were taking part in a military exercise.

The Herald is trying to establish if there is any link between that exercise and the soldier's death.

At least two helicopters - believed to be military-grade Sikorsky choppers - swooped low over Auckland last night, shaking residents' homes before they landed at the Domain and were greeted by an ambulance.

The choppers were part of a military training exercise but many residents were left bewildered and surprised by the force of their power.

Residents from other central and eastern suburbs also reported the helicopters flying low.

One of the choppers landed on a main sports field at the Auckland Domain - near the historic wooden grandstand - and was greeted by a St John ambulance with flashing lights. The second helicopter hovered as this was happening.