Hundreds, not thousands, of people waited at Wynyard Quarter on Auckland's waterfront to greet Charles, Prince of Wales, and his wife Camilla, Duchess of Cornwall.

The event this afternoon was a stark contrast compared to the same time last year when Prince Harry and Meghan, Duchess of Sussex, visited the same location.

Regardless, there was plenty of cheer and applause for the royal pair as they made their way along the Wynyard Crossing and into the Quarter.

Pausing occasionally as they walked, Charles and Camilla spoke briefly to some royal fanatics as they swiftly headed towards Jellicoe St, shaking hands along the way. 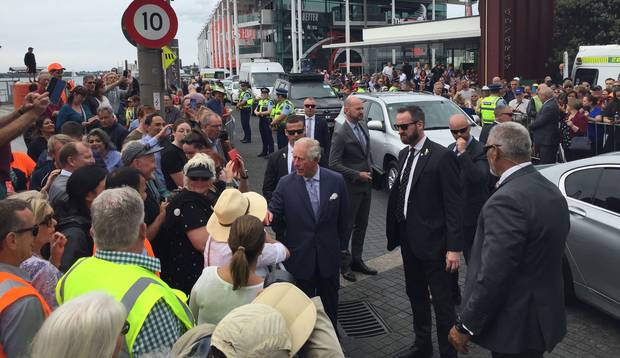 Quinny Paaka was fortunate enough to have Charles stop in front of her and even got the heir to the Commonwealth throne to take part in a hongi.

"Truly, I don't know what came over me and I just said 'hongi āhau' … I'm not even sure if that's how you say it but he leaned in for a hongi," she said.

"Under his breath he said, 'that's great' and then just carried on."

Up until an hour before Charles and Camilla were due to walk down the waterfront, Paaka had little interest in the royal family, she explained.

"I was just here [for] the once-in-a-lifetime [opportunity to] come and see Charlie," she said, "We touched heads and it was awesome." 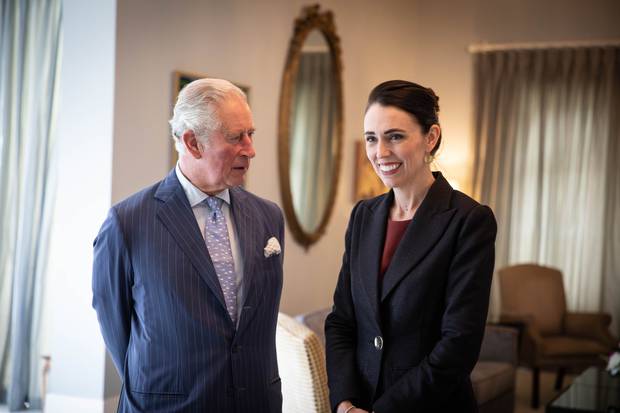 The day started for the royals at Government House in Epsom with the City of Sails putting on a bright, sunny day for Charles and Camilla's official welcome.

Members of the New Zealand Armed Forces performed a rousing haka for the royals before Charles did a royal salute and inspected the guard.

Camilla was soon whisked away to speak at a roundtable discussion organised by domestic violence organisation, Shine.

Meanwhile, Charles stayed on the grounds of Government House where he met with opposition leader Simon Bridges and Prime Minister Jacinda Ardern.

Both politicians were amazed at how well informed the future King was with New Zealand and its matters, the Prince taking an interest in the environment in particular. 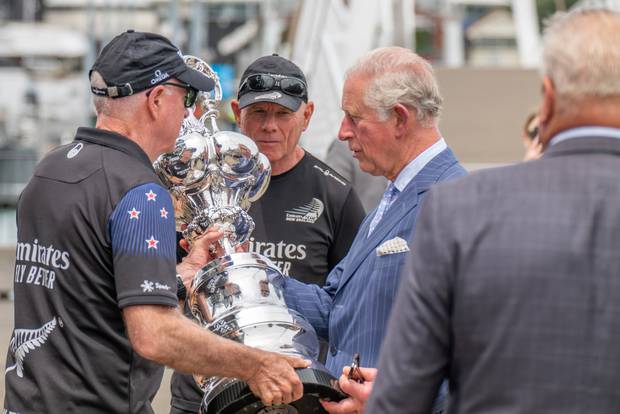 A member of the New Zealand Armed Forces during a haka for the royals. Photo / Jason Oxenham

"He was well ahead of his time about knowledge around climate change and [it was] really fantastic to have a conversation with him about what's happening in New Zealand," Ardern said.

Charles and Bridges shared a jovial moment in front of media before their private meeting.

Charles joked quietly with Bridges about the photographers who snapped away thick and fast - the camera flashes like strobe lights in a nightclub.

And as fast as the pair entered the room and shook hands, media were ushered out of the room and they began their meeting.

They discussed the future of the Commonwealth, trade and Bridges even handed the Prince a pot of honey from his electorate, Tauranga, he told media.

Meanwhile, Ardern donated 10 native trees to be planted in Charles' honour, she said.

Before the public walk, Charles spent time on the Waitematā Harbour with non-profit organisation Sea Cleaners.

On the boat, the Prince took part in a short plastic patrol before getting off at a wharf near the Viaduct where he met up with Camilla for the waterfront walk.

It was the first public engagement of the tour, with Charles and Camilla heading off to the Waitangi Treaty Grounds tomorrow.