By Phil Pennington of RNZ

Charges have been dropped against two big contractors over unsafe roadworks where a young cyclist was killed in Christchurch.

Fyfa Dawson, a cycling addict and barbering student, was hit by a concrete truck turning into a construction site for the new Southern Motorway extension, at Halswell in October 2019.

In place of prosecution, McConnell Dowell Constructors and Downer New Zealand have now made binding agreements worth almost $1.7m to contribute to safety work.

Fyfa Dawson's parents Sarah Campbell and Richard Dawson last night in a statement commented on the irony in their 19-year-old daughter's death:

"She had an adventurous spirit and cycled over 10,000 km in the United States. Ironically, she was struck and killed while cycling to work, 3k from home.

"Downer and McConnell Dowell's failure to ensure a safe traffic management plan around their worksite has had catastrophic consequences," they said.

"Fyfa lost her life. We lost a daughter, a sister and a friend. We think about her every day."

WorkSafe dropped the health and safety charges in return for an enforceable undertaking.

The companies will pay towards new studies, qualifications, guidelines and virtual reality training for safer roadworks, and run cyclist awareness programmes for roadworkers.

The undertakings include a $20,000 donation to Table Tennis Canterbury where Fyfa had played, making a risk assessment matrix baseline freely available to the industry, and developing a national guideline for safer treatment of vulnerable road users.

Fyfa's aunt Caryn Dawson told RNZ it had been more than two years of repeated trauma for the family going through the steps to seek accountability and change.

"The most difficult thing we're facing is that when someone's life is extinguished, so tragically, and suddenly, there's absolutely nothing that can be done to change that outcome," she said.

"They had been through the ongoing police investigation, the WorkSafe investigation, meetings with the companies, and every time there's a meeting, or an email or a phone call, you're literally transported back to the day of the accident, and literally relive it again". 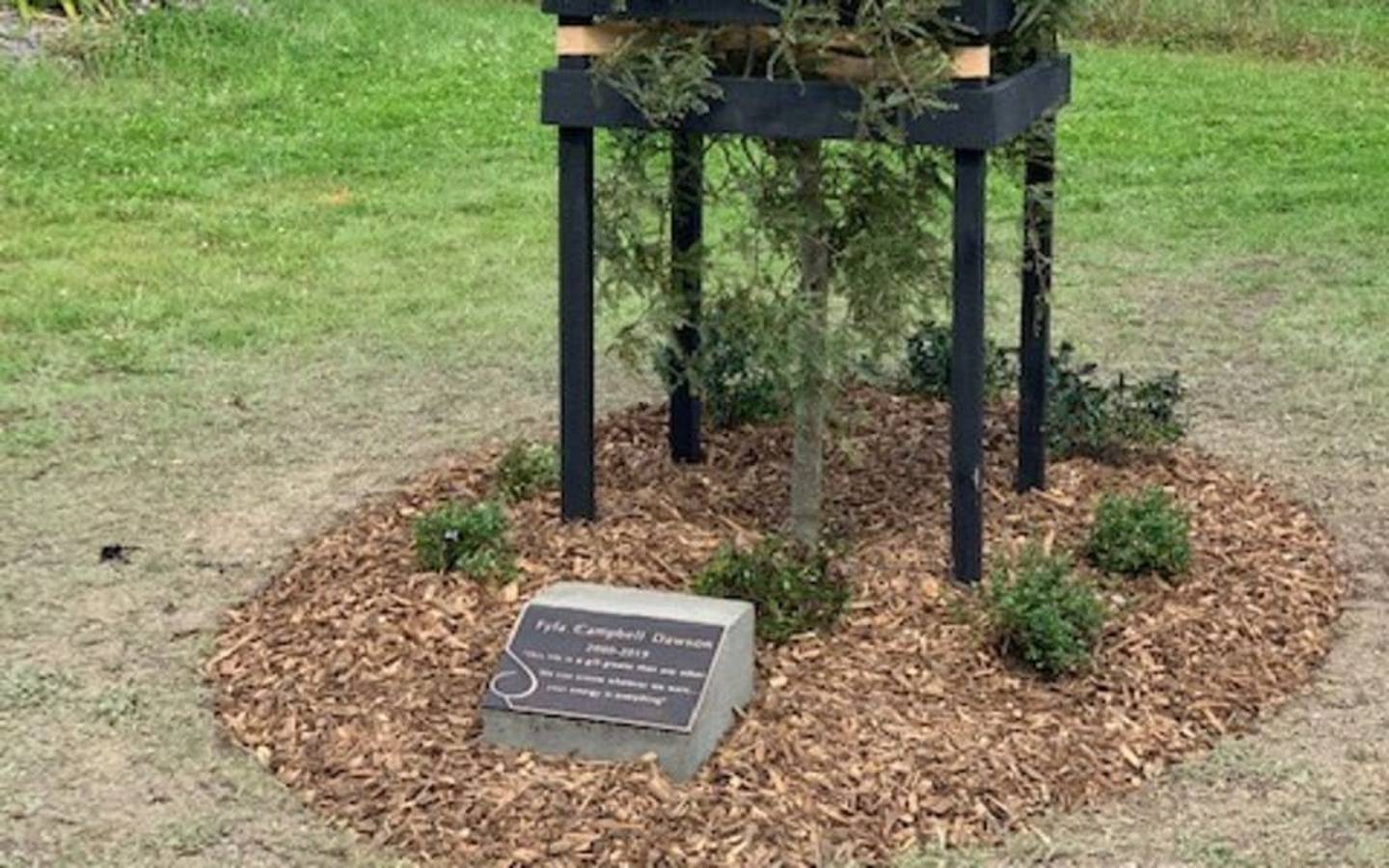 A memorial plaque for Fyfa Dawson close to the accident site in Christchurch. The words on the plaque were written by Fyfa in an Instagram post. Photo / Supplied

There was never going to be enough that anyone could do to be accountable in the face of what had happened, she added.

"We really live in hope that there will be some significant changes.

"As a contractor, you know, the safety of our families is in their hands."

Both companies issued brief statements; neither would give an interview to RNZ.

Neither company statement mentioned Fyfa, or her family, or said sorry.

"We are always seeking improvement in the Temporary Traffic Management space and we strongly believe that the work undertaken as part of this enforceable undertaking will move the industry beyond mere compliance with existing requirements and have a significant step change effect that benefits the construction industry and the broader community," the head of Downer New Zealand, Steve Killeen, said.

McConnell Dowell New Zealand & Pacific managing director Fraser Wyllie said his company was "dedicated to improving safety for vulnerable road users and embraces the enforceable undertaking as a platform to improve temporary traffic management delivery and build capability of workers and our industry to make roads safer for our entire community".

Cycling Action Network's Patrick Morgan of Wellington said WorkSafe had let down the family and public.

"We're bewildered at the lack of action by Worksafe.

"They're supposed to be there to protect us. And, you know, dropping the prosecution, it just leaves a lot of questions unanswered," Morgan said.

"Why was there no staff member supervising the work site? How do we know that any lessons have been learned?"

WorkSafe said this was a preventable death and cyclists had an expectation they would be safe.

It would monitor the companies' adherence to the agreed conditions, it said.

WorkSafe said it formally withdrew the charges against both defendants in the Christchurch District Court in early April. RNZ learned of this last week.

Caryn Dawson said nothing would bring her niece back.

"She went off on her own big adventure with her bicycle and her tent. And you know, she'd pitch her tent on the side of the road. She'd meet people along the way. She was taken into people's homes. She was just a really brave, adventurous soul."

Sarah Campbell and Richard Dawson said Fyfa "was a vibrant person who lit up the room".

"The loss of our daughter has been devastating."