The production of an inflammatory pamphlet addressing racial separatism within local government has disappointed the race relations commissioner.

The pamphlet, designed by Hobson's Pledge, would be distributed through New Zealand in the coming days and asks voters to be wary of council candidates.

"Want your rates spent on racial separatism?", the pamphlet asked.

Above the message a picture depicting an multi-ethnic group holding a banner which read, "we are one" was displayed. Behind them, a large wave was arched over and about to break with the word "separatism" on it.

The pamphlet also alleged mayors, councillors and bureaucrats were intent on dividing communities, handing power and money out according to ancestry and ethnicity. 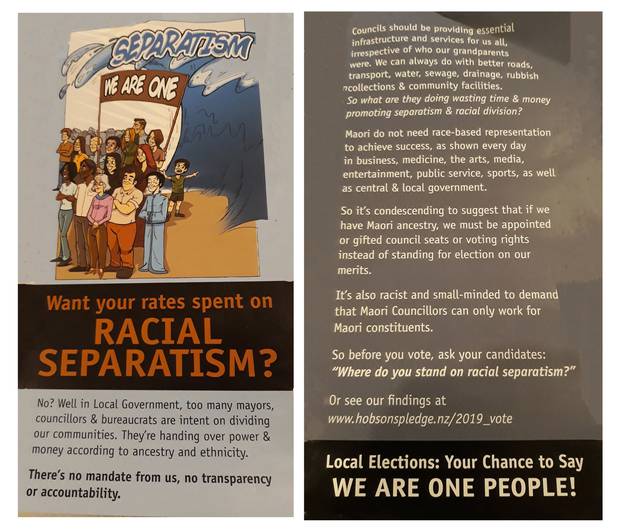 "In a multicultural society with bicultural foundations, New Zealand must honour the Tangata Whenua status of Māori," he said.

"As a former mayor, I have seen that it is has been beneficial for councils to consider their challenges through a Māori lens, which is made possible, when Māori are at the decision-making table in councils.

"I am disappointed to hear that a group is challenging these principles."

The whistleblower who sent the pamphlet to the Herald said they were "deeply concerned" by the message it sent.

"One cannot miss the symbolism of the wave, suggesting that the minority cultures will inundate us.

"By labelling the wave 'separatism', they're obscuring its meaning; but simply reading the pamphlet shows that 'separatism' is a euphemism for minority cultures and identities being recognised and having agency.

"I am deeply concerned by its content ... This imagery is incendiary, and possibly raises to the level of hate speech."

On the back, the pamphlet addressed why, in the opinion of Hobson's Pledge, it was wrong to have gifted council seats or separate wards for Māori.

When Hobson's Pledge spokeswoman Casey Costello saw the picture, she saw a united group of people about to be undone by separation.

"The issue isn't about Māori wards, it's about asking the councillors about their intentions of where they stand on the issue," Costello said.

"Māori are a part of the community, we're not separate ... Māori doesn't want anything different, so why separate? Why separate council funding?

"We need to have these conversations and I'm prepared to be confronted on it but the motive is genuine."

Councillors in Whakatane, Bay of Plenty and Manawatu had voted on separate Māori wards previously but all were rejected.

There was no doubt Hobson's Pledge was tapping into an area of unease around local government and Māori, political commentator Bryce Edwards said.

Generally, local governments had become more responsive to Māori and were more concerned to deal with issues of ethic inequality.

"Of course, all levels of government in New Zealand have been making major efforts to deal with racism and to address historic injustices," he said.

"The main way that local government authorities have done this is to focus on their role as Treaty partners.

"There have been plenty of ramifications of this process, which means that local government have brought into being special consultation with Māori, and have put resources and consideration into ethnic-related projects."

Meanwhile, in Auckland, the Independent Māori Statutory Board had two members who sat with voting rights on several council's committees. It also provided guidance to the council on issues impacting Māori to improve council responsiveness in the community.

Board membership was selected through an appointment process but change to the system was needed, Auckland mayoral candidate John Tamihere said.

"It's not working because it's appointed as opposed to elected.

"We need greater transparency and accountability and we need to have elected representatives like everybody else."