As a section of external fencing was being replaced outside the smoking area of Auckland's towering Stamford Plaza a 32-year-old man, newly returned from India and on day four of quarantine, took his chance and escaped managed isolation.

What happened for much of the next hour is still unclear, but what is certain is at some point the man, who had been tested for Covid-19 and awaiting results, went into a nearby Countdown supermarket on Victoria Street West and bought items at a self-service checkout.

Security charged with guarding those in managed isolation tried to follow him but lost him. The police were called and despite an extensive search of the area he eventually walked back into the downtown hotel around 8pm.

Had he walked directly along Albert St to the Countdown store 450m away, it would have taken just six minutes. If he took the same direct route back, 12 of the missing 70 minutes can be accounted for. Even with a generous allocation of 10 minutes for shopping, there still remains a 50 minutes window where no-one seems to know where he went. 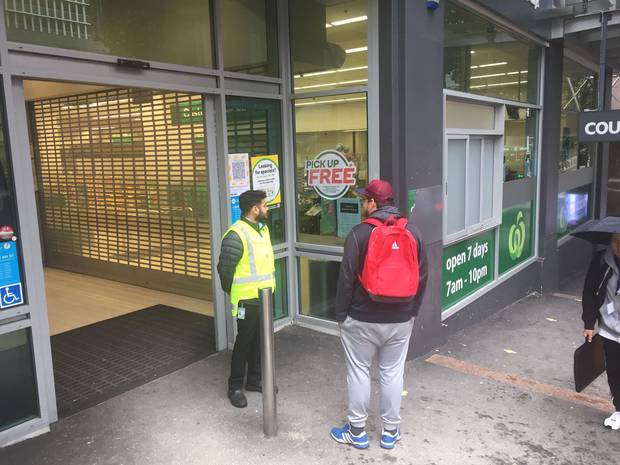 After the man's positive test this morning the Countdown supermarket was closed for a further "deep clean". Photo / NZME

The Auckland Regional Public Health authority has also launched an investigation after the second breach of someone in managed isolation in four days.

It's working with Countdown, who were forced to close the store for deep cleaning today, on any contract tracing and testing requirements.

The head of managed isolation and quarantine Air Commodore Darryn Webb says CCTV footage from within the supermarket has confirmed there was no close contact between the man and any staff or customers during his time there.

Health Minister Chris Hipkins said the man was wearing a mask and there was low risk to the public.

But as a result of this latest absconding incident, all fences in place at managed isolation facilities across the country are being replaced with 6 feet-high fences.

Webb said they were also reviewing the arrangements in place for smokers, and security in smoking areas.

The man, who is a New Zealand citizen and arrived from New Delhi on July 3 and the latest Covid case in the country, will be summonsed to appear in court after he recovers and is clear to leave quarantine charged under section 26(1) of the Covid-19 Public Health Response Act 2020.