Two people leading police on a pursuit throughout South Auckland overnight have seriously injured a dog handler and themselves after crashing.

The incident took place at the junction of John Walker Rd and Weymouth Rd, Manurewa.

All three injured were taken to Middlemore Hospital around 11pm.

The dog handler was en route to the pursuit when the fleeing vehicle lost control going around a corner at speed and T-boned the police wagon.

The two vehicles were severely damaged and debris was scattered in all directions of the scene, photographs showed.

"If these people were complying with the conditions of the coronavirus lockdown, this would not have happened," Inspector Daniel Meade said.

"We've had an incident in which a vehicle has failed to stop when signalled to by a police unit. We lost sight of that vehicle because of the speed at which it was travelling.

"It's failed to take a corner at the junction of John Walker and Weymouth roads and crashed into another vehicle that wasn't part of the pursuit."

The suspicious vehicle did not stop for police on Gainsborough St, Manurewa, and the pursuit was started. 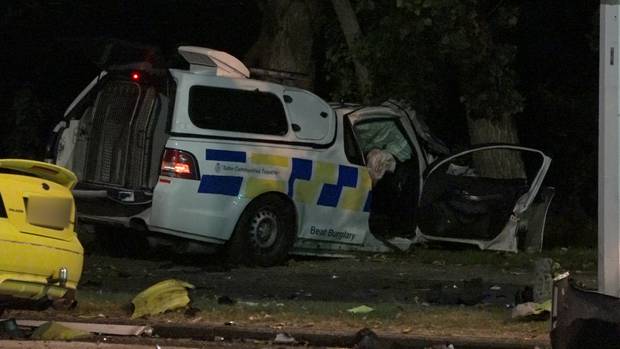 The dog handler suffered a broken leg but the dog was fine. Photo / Supplied

The dog handler suffered a badly broken leg and the police dog was fine, Meade said. All the people injured had serious but non-life threatening injuries.

St John sent five vehicles to the scene of the crash and transported the three injured to Middlemore Hospital.

Two of the three were in a critical condition and the other was serious, St John reported.

The Serious Crash Unit had attended the scene and the Independent Police Conduct Authority would be alerted to the incident.