Every year thousands of New Zealand ex-pats dress up in all things Kiwiana, get drunk and celebrate the Treaty of Waitangi during a crawl through the pubs of London.

For some it is a rite of passage, and while mostly in good fun it has also drawn its share of criticism, and nothing more so than the culmination of the day with a drunken haka in front of the world's eyes.

The performance by intoxicated Kiwis has been slammed as "insulting", and has long been opposed by the Ngāti Rānana London Māori Club, which exists to advance "the mana of te ao Māori in Britain and Europe".

The 2020 pub crawl is scheduled for this Saturday, with a 10am start at the Pride of Paddington pub, and culminates at 4pm for a haka at Westminster. 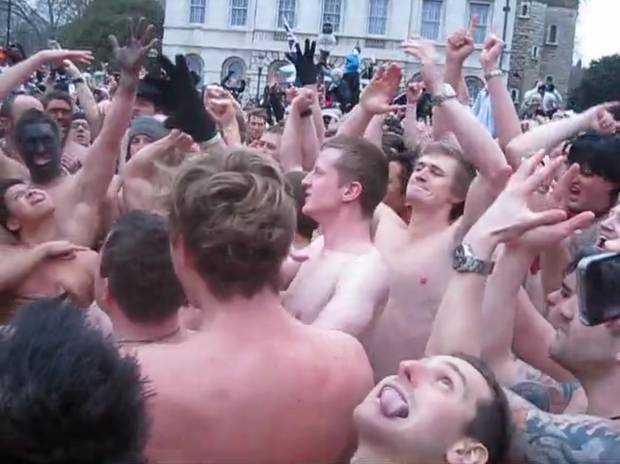 These Kiwi ex-pats were slammed for their "insulting" haka in London's Parliament Square during the Waitangi Day pub crawl back in 2012. Photo / File

The group of London-based Kiwis who have tasked themselves with facilitating the Waitangi Day Circle Line Pub Crawl - who declined to provide their names - told the Herald they were not responsible if people performed the haka while intoxicated, but urged attendees to respect it.

"We don't approve, but we don't run the event so can't control anybody - every Kiwi knows the importance of the haka," a spokesperson said.

"We have advertised for many years to not do drunk haka. We utilise peer pressure amongst others to not try it after the event. It has worked very well."

When asked what they made of criticism that they were encouraging drunk people to perform the haka, disrespecting Māori culture, the spokesperson called it "a storm in a tea cup fuelled by people who don't know anything about the event".

"In the past, when there was a bigger New Zealand community in London, some people took it upon themselves to organise it. Nowadays you'll see a handful of people start one. Mostly it's spectators at this point of the day."

The group had not reached out to the Ngāti Rānana London Māori Club in any formal capacity, but said "we speak to many Māori before, during and after the pub crawl". 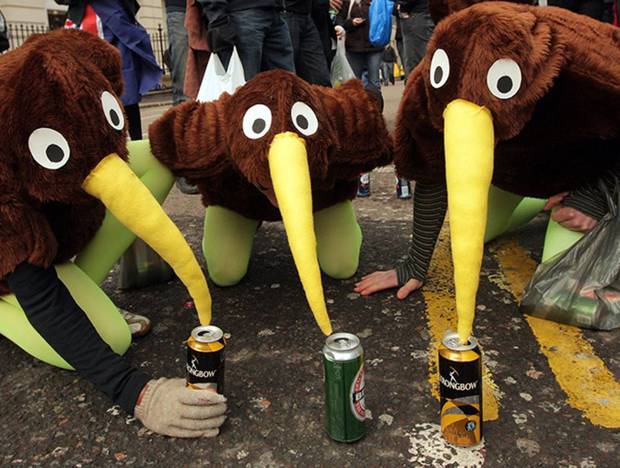 Costumes generally include many creative forms of Kiwiana. Photo / File

The group stressed how well-behaved attendees were, with more than 6000 taking part last year with no arrests.

The performance of a haka during the pub crawl has long been opposed by the Ngāti Rānana London Māori Club, whose vision is "advancing the mana of te ao Māori in Britain and Europe".

Chairperson Zia Jones said he could not comment on behalf of his iwi, or wider iwi across New Zealand, but from their perspective performing a haka while intoxicated was never acceptable.

"Ngāti Rānana in no way whatsoever endorses haka being performed by intoxicated people.

"To do haka is like driving, it is an honour and a privilege and with it comes great responsibility.

"We at Ngāti Rānana give the opportunity for those who wish to do haka the chance to learn."

Jones said he'd made their position and views clear to Clint Heine, who runs the popular Facebook page Kiwis In London, which also promotes the pub crawl.

For Kiwis feeling a little homesick and interested in tikanga, waiata-ā-ringa and haka Jones said they could join Ngāti Rānana every Wednesday, 6.30pm at New Zealand House.

"It mocks our traditional beliefs - haka is not a game to be used as entertainment, with people laughing at them, and for corporate training," Māori cultural advisor Karaitiana Taiuru said.

A group of lawyers in France also recently came under fire for performing a haka as part of their protest against pension reforms.

In a column for the Guardian, New Zealand political commentator Morgan Godfery called it a "protest gimmick, a way to jimmy up attention".

"One general rule applies: don't perform a haka you were never given permission to."