A paramotor pilot who flew over the scene of a crash that killed three road workers near Matatā on Tuesday says he would not have been visible enough to be a distraction.

Dean Remnant of Pāpāmoa said he was cruising at an altitude of about 180m (600-700 feet) along Pikowai Beach towards Pukehina a little after 1pm.

Paraglider pilot Dean Remnant took this photograph over the scene of the horrific Pikowai crash that killed three people.

Remnant, who has been flying for more than seven years, had worked out he was at least 3km away from the scene when the crash, involving three trucks, happened on State Highway 2 at Pikowai. 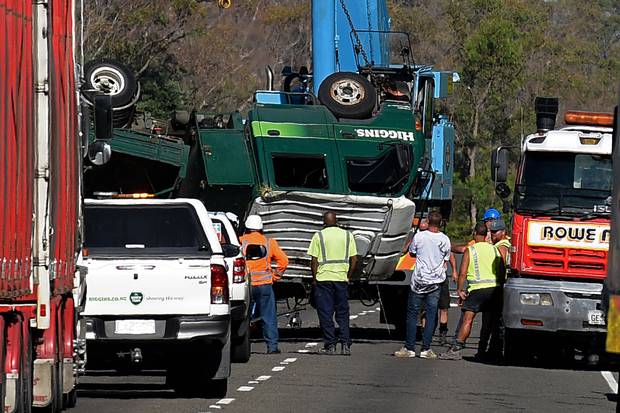 Damaged trucks being removed from the crash scene at Pikowai. Photo / file

Remnant said that when he flew over the scene, he at first thought something had happened on the train tracks.

Cars and trucks were still driving past the crash, he said. People were standing on the side of the road.

"I thought maybe it was a fender bender."

He dropped down and circled and took a few photographs then continued west over the beach.

"I didn't know how serious an incident it was and carried on up beach for some distance. By the time I came back, emergency services were there." 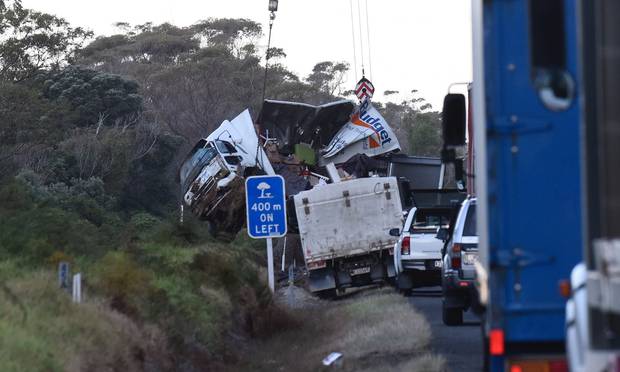 A damaged truck at the crash scene at Pikowai. Photo / File

When he landed he learned that three people had died and that the police were looking to speak to witnesses, including a paraglider.

At first, he worried that his presence might have been a factor, and saw comments from locals suggesting he had been a distraction.

He remembered flying past a house on the cliff about the highway and seeing someone running to the edge with a phone to look at the crash. He checked Google Earth and worked out that house was 3km from the scene.

"I wouldn't have been visible at the height I was and distance.

"I was too far away to see crash, it was well over by the time I flew past so I have no idea of the cause," he said.

He said he had given a statement to the police and provided them with the photographs he took.

Rotorua road workers Haki Hiha, David Eparaima and Dudley Soul Raroa were killed in the accident, which involved four trucks. All were working for Higgins at the time.

The circumstances are under investigation by the police Serious Crash Unit. WorkSafe and a review by NZTA.