Former National Party leader Simon Bridges has described himself as a peacock becoming a feather duster in one of his first interviews since being rolled from the role by his Bay of Plenty colleague Todd Muller.

"For me, it's sort of like 'once a peacock, now a feather duster', but it's all good man. Life is good," Bridges said.

As Bridges spoke today , the National Party was expected to meet as a caucus. For the first time in 12 years, Bridges won't be part of it himself after being ousted from his former role as leader on Friday.

In an interview with Will Johnston on The Hits Bay of Plenty, the former National leader revealed he enjoyed now having the chance to finally do "some of those good, honest, practical things".

"The most manly thing I've done in five years ... I chopped up half a tree with this thing, these are lawyer hands man, it was brilliant to do that. [I'm] Just taking pleasure with my family and looking forward to picking up my kids a bit more and being a great local Member of Parliament in Tauranga."

Bridges said he was still reeling from the coup. The takeover came after dramatic poll results revealed waning support for Bridges and the National Party ahead of this year's general election.

"As much as I'm only human, I am really disappointed ... there's mixed emotions and a lot of that but on the other side of it, I want National to win. I still want National to. We've got the goods in a number of areas."

Muller yesterday revealed his new caucus line-up, in which Bridges is yet to feature.

Bridges said he had hoped to potentially gain the Minister of Foreign Affairs role but was happy to be a backbencher and enjoy taking some time to enjoy his hometown.

"As a leader, you actually end up dealing with international things and so on but in the end, for now, [now's] just a chance to really detox." 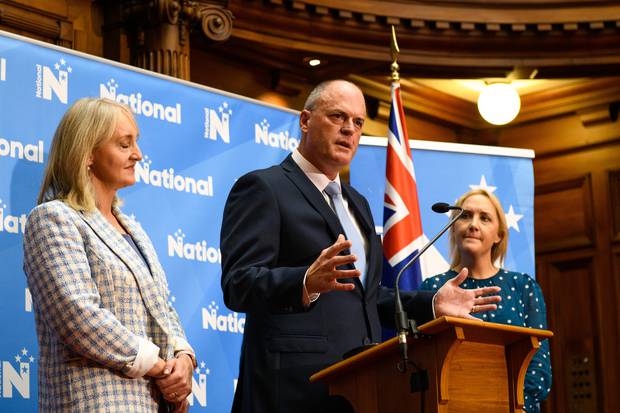 When asked whether the "massive highs and massive lows" of his political aspirations had been worth it, Bridges said he regretted nothing.

"There is a bit of truth in 'what doesn't kill you makes you stronger'. It all sort of builds up," he said.

"I feel very blessed. I've been MP for Tauranga since 2008. I was a fresh-faced boy. I've always said that first and foremost [being MP] has been the biggest privilege for but to come back full circle now, I don't have other pressures on me other than that of Natalie and the kids ... I'm looking forward to stuff like constituent clinics in Greerton and my office in 3rd Ave and helping them solve their problems as MP.

"I definitely still have a passion for politics and for the city and for our country and now I can still make a difference – that's a big driver for me."

Muller said yesterday that Bridges was still deciding his next step.

"Should he wish to continue serving as an MP, he would be in shadow Cabinet."