The Australian Government has yet to give its support to transtasman flights beginning from July 1, Foreign Minister Winston Peters says.

The actual timetable of Wellington to Canberra flights would be more up to the Australian Government more than the New Zealand Government, Peters said.

There remained restrictions on interstate flights in Australia, he added.

"We're waiting for a response from their federal government."

He said it should have happened yesterday, "but we're dependent on Australia". 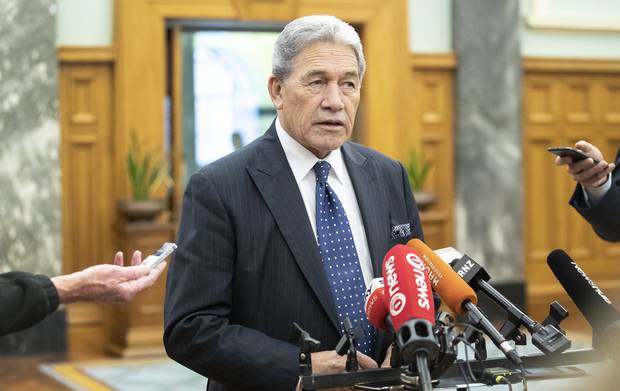 On Trump and the SFO probe into the NZ First Foundation

He declined to comment on how US President Donald Trump had handled the protests across the US in the previous days, saying that neither country appreciated having any interference in each others' democracy.

He said he had not been interviewed by the Serious Fraud Office, which is investigating the NZ First Foundation.

Peters said any criticism that he had breached the Cabinet Manual by expressing his opposition to staying in level 2 was "poppy-cock", given the Prime Minister had already publicly said there had been a difference of opinion around the Cabinet table.

NZ First has also not been "absorbed" by the Labour Party, Peters says.

That's despite NZ First MP Shane Jones saying this morning that the party "won't tolerate being absorbed" by Labour.

Peters said the Government's interest-free loans to small businesses was NZ First's idea, and that had helped small businesses to stay afloat while Labour and NZ First had negotiated a proposal to help with commercial rents.

He said Labour had wanted to legislate to affect all commercial leases, but NZ First had wanted it to be more targeted.

The proposal is open to New Zealand-based businesses with 20 or fewer employees, but Peters said it could apply for each business site.

He said if the limit had been 50 employees, it would be criticised as not being up to 100 employees.

More businesses could have been helped if the policy had been announced sooner, but Peters said "some things take time".

The solution is now better targeted to help New Zealand-based small businesses meet rental costs, he said, but it is not open to businesses that have already negotiated an arrangement with landlords.

The Government will amend the Property Law Act to require compulsory arbitration to find "a fair reduction in rent" where a business has suffered a loss of revenue because of Covid-19.

The package will invest up to $40 million, with the Crown only covering some of the costs. It will be open to New Zealand-based businesses with 20 or fewer staff at each leased site.

"I am concerned that some landlords and tenants are not coming together to make agreements that reflect the seriousness and uniqueness of Covid-19, including behaviour where large commercial tenants refuse to pay rent, and landlords demanding rent from small retailers who haven't been able to operate," Little said this morning.

"The package provides for flexibility of outcomes, and will provide a subsidy of up to $6000 per arbitration. This means, in many cases, the Crown will cover about 75 per cent of the arbitration cost."

The announcement comes after weeks of to-ing and fro-ing, and many businesses may have already fallen through because of their inability to cover the rent.

Peters said Labour had wanted the law change to apply to all commercial rents, but that would have used a "sledgehammer to smash a nut".

"The solution to this problem is not to alter contract law for all existing lease arrangements, which is what our coalition partner wanted," he said in a statement this morning.

"This would've been poorly targeted policy and affected many landlords who've sensibly adapted to the changed circumstances brought by Covid-19."

Peters, who is also Deputy Prime Minister, has also disputed his coalition partner's wish to put off moving to alert level 1 until next week at the earliest.

He said there has been 34 days since the last community transmission case, and on that basis New Zealand should already be in level 1.