It produced an ash cloud spanning hundreds of square kilometres – but scientists say it's unlikely Hunga-Tonga's big blow will put any dent in global warming.

The Tongan volcano's Saturday evening eruption was so large it could be clearly observed from space, and created an enormous umbrella of ash that stretched to around 260km.

In our planet's past, major eruptions have been able to cool the climate by spewing massive amounts of dust and sulphate aerosols into the atmosphere.

While larger ash particles fell from the air quickly, smaller ones rose to form a dark cloud in the troposphere - and the very smallest entered the stratosphere, where they could block sunlight and causing cooling over large areas of the Earth.

When Indonesia's Mt Tambora erupted in 1815, belching an estimated 100 cubic km of ash into this atmosphere, the average global temperature fell by as much as 3C in 1816, influencing the famous "year without a summer" in North America and Europe.

A 2020 study found six major eruptions – including Krakatoa in 1883, Tarawera in 1886 and Mt Pinatubo in 1991 – had their own fleeting footprint on New Zealand's climate over the last 150 years.

These events had led to mean temperatures about 0.3C to 0.5C lower compared with several seasons before – and often an increase in southwesterly winds.

🌋 Here is a 24hr loop of the Hunga Tonga-Hunga Ha’apai eruption yesterday. 🌋

Climate scientist Professor Jim Salinger, who co-authored the study, said Hunga-Tonga's eruption was big enough to send 0.4 teragrams – equivalent to 0.4 megatons – of sulphur dioxide (SO2) into the stratosphere.

That likely wouldn't have any global climate effect, he said, but it could have a regional one.

"What we'll probably see in the next two months is rather magnificent sunsets as the sulfuric acid mist slowly descends from the stratosphere – but I'd also expect cooling in our region to amount to a few tenths of a degree, maximum."

Salinger said any climate effect would likely take months to play out, given it took time for these tiny particles to disperse over the Southern Hemisphere.

"It's certainly a very significant effect locally, but it's not likely to have an effect on the global climate," he said.

"Sure, it's cutting a bit of sunlight reaching that particular part of the tropics, and what's in the aerosol cloud will spread out in the stratosphere – but that's not going to lead to significantly cooler temperatures." Major eruptions like Tarawera in 1886 have been shown to cause temporary dips in New Zealand's average temperature. Image / Charles Blomfield

By contrast, Mt Pinatubo's eruption - the second-largest terrestrial eruption of the 20th century after the 1912 eruption of Novarupta in Alaska – pushed down global temperatures by 0.5C.

That owed to the sheer volume of SO2 it ejected into the stratosphere: around 15 million tonnes, and more than any eruption since Krakatoa in 1883.

In a media statement, Niwa also said early indications from the Tonga eruption did not show extreme levels of SO2 in the stratosphere.

"More measurements need to be taken and further eruptions are possible, but it seems that this eruption event is unlikely to have a significant impact on global climate or change the direction of the global temperature trend," Niwa said.

However, some of the SO2 had been wrapped into Cyclone Cody, east of New Zealand.

"SO2 is a toxic, invisible pollutant, so for those in Tonga, this could cause short-term hazards to human health, including acid rain and 'volcanic smog'."

While volcanic eruptions also released carbon dioxide (CO2), that generated in contemporary events have never caused any detectable global warming of the atmosphere.

In fact, studies have shown the world's volcanoes releases less than a per cent of the CO2 currently caused by human activities.

Meanwhile, a new analysis by Salinger has found the wider New Zealand region experienced its third-warmest year in 2021, behind 2016 and 2019.

Combined, the "Zealandia" region as Salinger called it, experienced an average of 14.11C.

Along with the influence of climate change, Salinger said last year's warmth was because of a mix of factors, including warmer seas and the effect of La Niña, which faded but then returned. 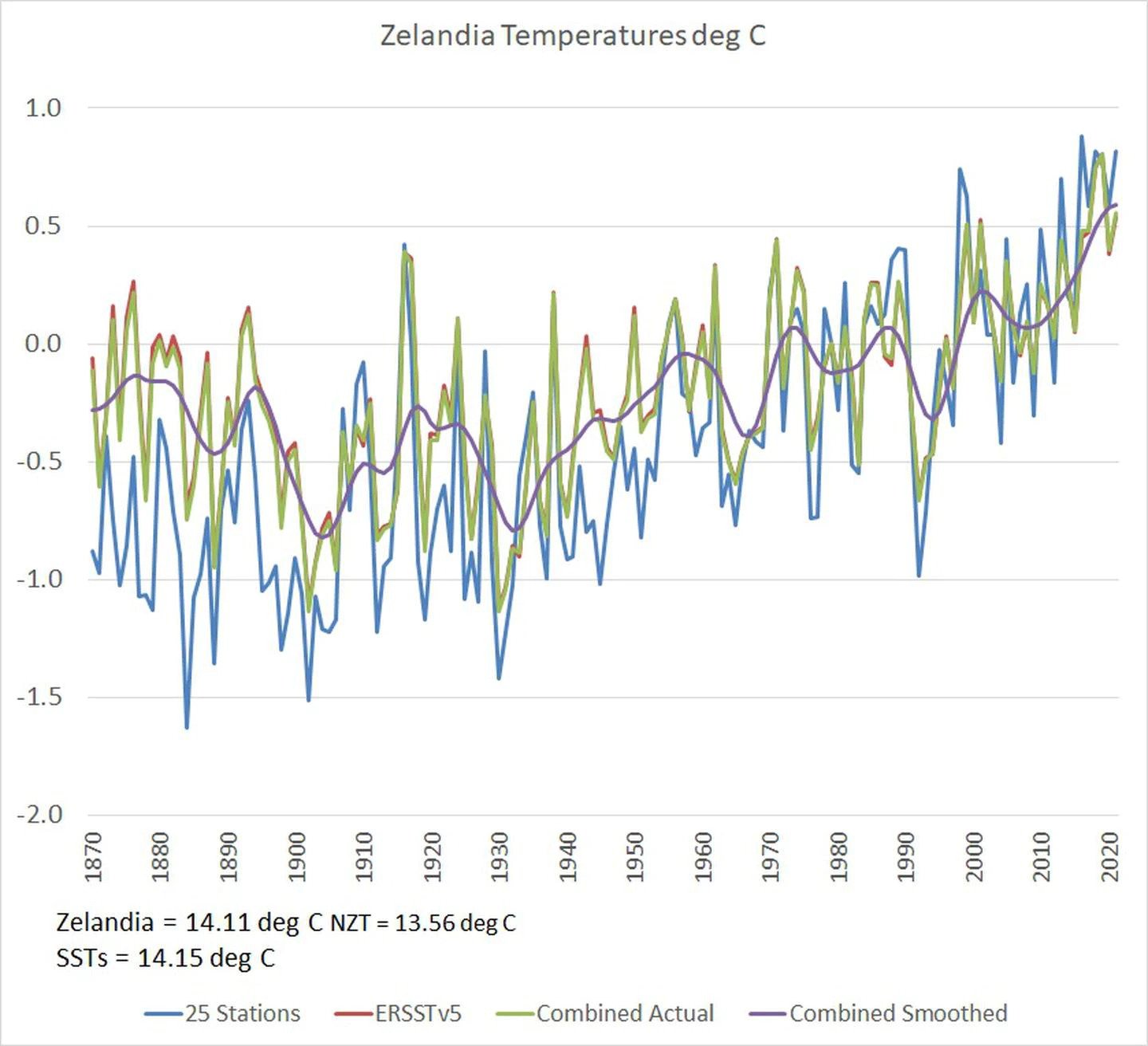 A separate climate indicator, called the tripolar index, had spent much of last year in a negative phase, which encouraged La Ninas and sea surface temperatures around New Zealand to be above average.

Still, Salinger said the result again drove home the fact that climate change was continuing – and he urged leaders to take bold action to slow it.

"We very urgently need to get going."