A man says he experienced the "worst flight" ever after being stuck beside a group of rowdy travellers.

The passenger, who does not wish to be named, boarded flight Cathay Pacific CX113 from Hong Kong to Auckland on Friday, January 11.

What he thought would be a pleasant flight soon turned to anger and frustration after taking his seat next to a family of six.

He believes the group were linked to the travellers who left rubbish on Takapuna Beach and threatened people over the weekend.

Police are investigating the incidents.

He told the Herald the two parents, their son and his partner and their two children were unruly and caused boarding delays.

"One of the daughters held the whole plane back from sitting by standing in the aisle," he said.

"She started shouting at her mum because she didn't know where she was seated. She then asked for food maybe 10 times before we even took off, followed by the parents bugging the attendants for food and beer.

"The parents also asked for different seats because they are overweight and didn't have enough space, even insisting the attendant ask another couple with the only free seat on the plane to switch with them."

After the plane took off, the family's children walked up and down the aisle talking loudly and shouting to their parents, leaning against other passengers and harassing flight staff, the man said.

According to the passenger, the parents were quite a number of alcoholic beverages deep during the flight and left a soiled piece of clothing in their hand luggage, stinking out the plane.

"They would lean against us often with an armpit on my head or an entire arm blocking the movie I attempted to watch. I was already boiling at this point, so asked the attendants if we could move.

"The son seemed annoyed because when he walked past he often bumped my chair.

"After leaving the plane they even left one of her [their baby's] suits in the overhead that we think had actual poop left in it, because it smelt like death."

On the descent, the group were disruptive, with one daughter standing up to chat during landing.

"The daughter also stood up and went to chat during landing ... ignoring the seatbelt sign," according to the passenger.

"They told her to sit down, then stood up again before getting the plane to the gate."

The passenger told the Herald two of the people on the flight look to have appeared in the video of the altercation at Takapuna Beach.

Meanwhile, police says they are investigating the incident at Takapuna Beach where a group of unruly Irish travellers dumped rubbish and threatened locals on Sunday.

Disturbing footage emerged of about 12 tourists leaving behind a large amount of rubbish and threatening to "knock the brains out" of locals who challenged their behaviour.

In a statement to the Herald, Inspector Kevin McNaughton said they will speak to those involved, and said littering can lead to a hefty fine.

"Police are currently investigating the incident at Takapuna Beach on Sunday afternoon to identify those involved in this incident," he said.

"Police will be speaking with those involved and will be referring them to Council with regard to their behaviour around the littering of rubbish.

"Police would like to remind the public that offenders caught illegally dumping rubbish may be issued with a fine of up to $400.

"Serious offenders may also be prosecuted under the Litter Act 1979, with a maximum penalty of $30,000.

"We pride ourselves in our clean, green image as a country and thank the members of the public who reported this behaviour on this occasion."

Beachgoer and witness Krista Curnow told the Herald the family of tourists surrounded her and shouted abuse while footage from the incident shows a young boy shouting "I'll knock your brains out". 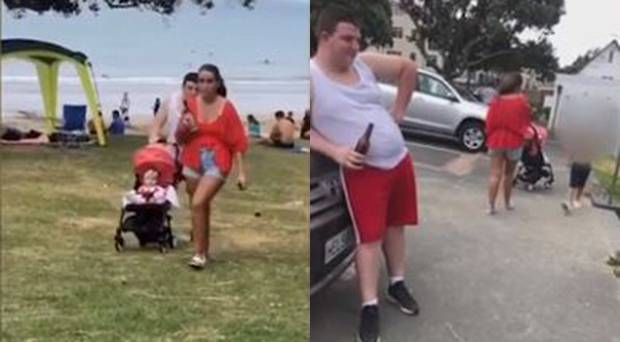 Disturbing footage has emerged of Irish tourists dumping rubbish and empty alcohol bottles on Takapuna Beach - then threatening to "knock the brains out" of locals. Photo / Krista Curnow

"The young boy in the video came up to our group and emptied his bag of chips on our blanket, before laughing and ran away," she said.

"Later on, the family packed up and left all their rubbish on the reserve. We were thinking 'are you serious'?

"We asked them if the were going to pick up their rubbish and they said they weren't coming back. So I followed them and I said 'hey don't come to our country and disrespect it like that way'.

"Their response was basically if we have a problem then we can pick it up and that that's what the council is for.

"That's when they started getting quite violent. About four or five ladies stood around me in a half circle. They were saying they were going to hit me and I started walking backwards to get out of it.

"They turned violent and even grandma and the child got involved, saying they wanted to punch my head in."

The little boy in the video then started swearing and getting aggressive, coming up to Curnow and her friends, saying he was going to "knock your brains out".

As the family were leaving the beach, Curnow attempted to take a photo of their number plate, sparking the driver into a rage where he attempted to run her over and steal her phone, he said.

"He drove up onto the kerb towards me and he jumped out of the car and tried to take my phone. A bystander jumped in and told him to calm down.

"They drove off with their boots up, trying to hide their number plates."

Curnow said she stood up to the family because no one should put up with the mess they made and didn't want to let tourists disrespect our country.

She also accused the family of drinking and driving.

"We live in one of the most beautiful countries in the world, how dare people come to New Zealand and disrespect our country, this is our home.

"The rubbish was one thing, but drinking and driving with their babies in the car just topped it off. And the mouth on that young boy - absolutely disgusting! What kind of role models are the parents allowing this sort of behaviour.

"Though I loved how everyone else on the beach came to support and we all picked up the rubbish together."