Nelson residents are being evacuated from the Walters Bluff fire burning northeast of the city, the council says.

Nelson City Council said if you have been evacuated, go to the Saxton Stadium Civil Defence Centre at Saxton Field. 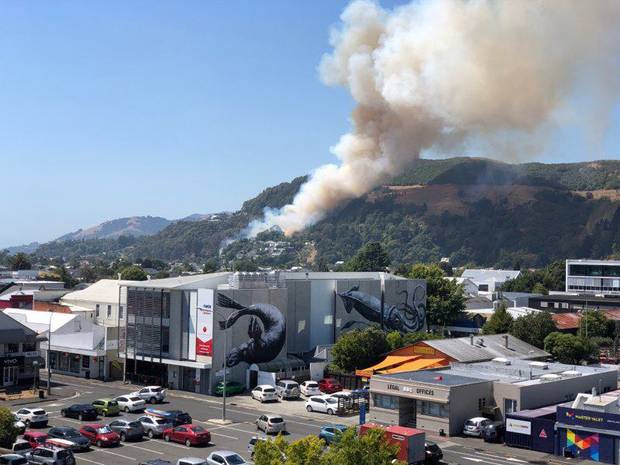 The town of Wakefield is being evacuated after fire chiefs fears that a northerly wind is picking up and could threaten the town.

And there is no respite in sight for firefighters in the city of Nelson with Fire and Emergency confirming another blaze burning northeast of the city, on Walters Bluff.

A caller to Newstalk ZB named Tony said he watched the flames go up.

He told Andrew Dickens the blaze flamed up very quickly and was spreading across the back of houses, saying it looked like they're almost ready to go.

The call was made at 12.50pm today to start evacuating the 3000 residents.

There is no time to dampen down their properties, he said.

Kirkby said between the State Highway and the river, the whole area is being evacuated "as we speak".

"The rest of Wakefield will follow suit, they have all been told to move out, but they are focusing on that first stage and then they will be moving on to the second stage."

Kirkby was encouraging residents to go and stay with family and friends.

"We have opened up the Saxton Stadium and that is sufficiently big that if people need to have a place to stay that will be set aside for them to go and stay there."

The fire front is currently about 2.5km-3km away.

However, there's fears that a northerly wind, which has just started to pick up, will fan the fire as it did yesterday afternoon.

There have been reports of embers from the blaze jumping 600-800m. It's feared that embers could spark a new front by landing on the tinder-dry area, which has just been declared by Agriculture Minister Damien O'Connor as being a drought zone.

The Civil Defence Centre in Wakefield has been moved to Saxton Field Stadium.

Evacuated residents are asked to register, either by going to the centre or for those who can't make it to the centre, or don't need additional assistance please call 03 543 8400 to register by phone.

Residents have been advised by text message. Police officers and Defence Force personnel are then going door-to-door.

Fire officials say the fire is not under control at the moment, Kirby told media.

"They're doing their best to limit where it goes."

There is a fire break around the Wai-iti River at Wakefield.

Earlier this morning more residents were evacuated from their homes in Pigeon Valley as concerns mount about heavy smoke and the possibility weather conditions could fan the flames.

While some residents had earlier been able to stay with their homes, police and other Government agencies were now working to ensure all residents evacuated safely.

People are asked to take water, food, medicines, pets and valuables and to register at the Evacuation Centre at Wakefield, St John Church or ring 03 543 8400.

People with horse floats and SPCA animal rescue vehicles have been seen trying to get back into the cordon.

A reporter at the scene said rural fire vehicles were filling up at the fire station next to the cordon before racing off towards the blaze.

She said there was heaps of white ash falling from the sky, and the cordons had now been moved down the road to the intersection with State Highway 6.

"Some residents on Windlesham Pl, off Pigeon Valley Rd, were distressed. Others were putting water into their gutters through hoses to try and keep the roof catching fire if flames came near," she said.

Residents in Wakefield, 30km south of Nelson and close to Pigeon Valley, were also advised to take care as smoke from the fires is expected to blow into the town when the wind picks up this afternoon, Fire and Emergency said.

The smoke may irritate the eyes, nose, throat and airways of those in homes closest to it.

However, people with asthma, bronchitis, emphysema or other lung diseases are at greatest risk, while smoke inhalation could also affect those with angina or heart diseases.

People with these conditions should avoid exposure if possible by remaining indoors, closing all the windows and doors and turning off ventilation or airconditioning shafts that draw in air from outside.

The fresh warnings come as a medium-scale adverse event has been declared.

The wildfire, along with drought conditions in the area around 30kms south of Nelson, have combined to make it "a particularly tough time" for those trying to manage stock and grow food, O'Connor said.

The Ministry for Primary Industries makes the classification of an adverse event, usually following an approach by the community.

There are three adverse events – localised, medium and large-scale and can cover things like droughts, floods, fire, earthquakes and other natural disasters and take into account the magnitude of the event, the ability to prepare for it and the capacity of the community to cope.

O'Connor today said the announcement unlocks extra funding of $50,000 for the Rural Support Trusts and primary industry groups to help speed up the recovery of farming and horticultural businesses.

"The forecast holds little respite following several weeks of heat and high winds and with water restrictions in place, pastures and orchards are parched," he said.

"Officials have been working with the local trusts, councils, and industry bodies over the past couple of weeks as the dry weather threatened to tip into drought. The fire has further hurt our rural communities with some stock losses, essential access to water restricted, feed destroyed and infrastructure damaged.

"The acute issue is the management of stock where their owners have evacuated their properties due to the fires."

Ministry for Primary Industries (MPI) is working vets, SPCA, Fire and Emergency New Zealand and police to help farmers manage their animals or move them until it's safe to return.

O'Connor said the focus remains on getting the blaze under control, cleaning up the immediate damage, and then supporting the rural sector to recover for winter.

"The Rural Support Trusts do a fantastic job all around the country and are invaluable during emergency situations and in the weeks and months following," he added.

"There will be difficult times ahead and the Government will ensure everything that can be done will be done to ensure people and animals are safe and can get back on their feet.

Earlier today it was also revealed that the leaseholder of the land where the Tasman bush fire allegedly began on Tuesday afternoon is "co-operating fully" with investigators.

A lawyer acting for N.E. Park & Sons said there are "indications" it may have emanated from land leased by his client company while contractors were operating on that land.

The Herald revealed on Wednesday that a contractor ploughing a tinder-dry field up Pigeon Valley was suspected to have sparked the blaze.

Lawyer Rick Farr says that while it is "far too soon to confirm the source or the cause of the fire", the major concerns now are "ensuring the safety of the residents affected as well as protecting property and infrastructure and of course getting the fire out".

"My client company is co-operating fully with insurance assessors who are on the ground, investigations have commenced and the findings of those investigations will no doubt become public in the fullness of time."