A luxury Waiheke property built by former All Black Marc Ellis has not sold after a year on the market and its sellers have now cut its price.

Its agent blames the Government's ban on foreign property purchases, saying it has removed 70 to 80 per cent of the potential buyers for top-end homes in Auckland.

The struggle to sell the Waiheke home was also a further sign of a slowdown in the city's market, especially among multimillion-dollar properties.

The clifftop property in Oneroa was sold by Ellis and his ex-wife Agustina Mon in 2016 for $8.2 million after their marriage ended.

When it was relisted by new owner and property tycoon Ted Manson in September, agent Michael Boulgaris said it could sell for nearly twice the price. Improvements to the property meant it could be worth "downwards of $15 million", he said at the time. A year later, it was now "priced to sell" at $9.85m.

Boulgaris said the $15 million figure was based on an old appraisal, and $12.5 million would probably have been more realistic a year ago.

In the last year, there had been "an adjustment" in the market and that was reflected in the reduced price of less than $10m. 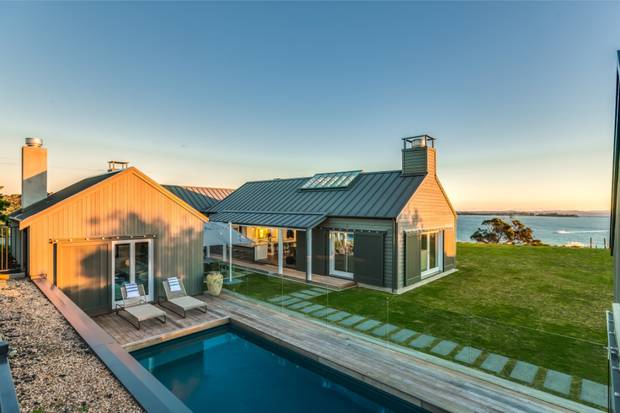 The house, which has a CV of $6.9m, boasts views of the Auckland skyline and Motutapu, Rangitoto and Rakino islands. Photo / Supplied

While there were a few factors in the slow sale and lower price, Boulgaris said the primary driver was the ban on non-resident purchases of existing property, which came into force in October.

"It wiped our market out," Boulgaris said, estimating that the number of potential buyers had been cut by between 70 and 80 per cent.

"We've lost our buyers so it's slowed the process down. So the only way to tempt the buyers is to be a little bit more realistic with the price. What I'm seeing is every owner is adjusting by 10 per cent and it is selling within weeks."

A less competitive market meant potential buyers were no longer fearful that they would miss out: "That is why auctions aren't really working - because there's no fear factor."

Boulgaris said he was now in negotiations with two potential buyers for the Oneroa property.

Manson, who heads one of the country's largest property development companies, redecorated the home, added a helicopter pad, and did around $1 million in landscaping on the 367sq m property.

Real Estate Institute of NZ said earlier this month that fewer luxury properties were sellingin Auckland, especially those worth more than $3m.

The ban on foreign property purchases, which exempts Australians and Singaporeans, was designed to create a more even playing field for New Zealanders wanting to buy a home. It has led to an estimated 80 per cent fall in the number of homes being bought by non-residents living overseas.

Statistics NZ data showed 0.6 per cent of homes went to non-residents in the first quarter of this year, down from a peak of 3.3 per cent in the March 2018 quarter.