The man who cut through a fence and absconded from the Hamilton hotel wandered into a nearby booze store and picked up a four-pack of European beer and red wine before leaving the shop.

The man who served him told the Herald he spent just two minutes in the store and knew exactly what he was after.

"He walked in and bought a four-pack of Leffe Blonde and a pinot noir.

"I asked him how he was and he just said 'fine'," said a staffer.

He said the man paid by cash. Because of this every single note and coin in the register had to be cleaned this morning.

The escapee, in his 50s, absconded from the Distinction Hotel yesterday and is due to appear in court later today.

It is the third escape from an isolation facility in a week.

The man said it wasn't until this morning that police contacted the shop and asked to see footage from last night.

Initial information suggests an individual cut through fence ties at the 1.8-metre fence to break out of the facility, and returned to the facility sometime after that.

It is believed the individual was off the premises for around half an hour, between approximately 6:30pm and 7pm yesterday. 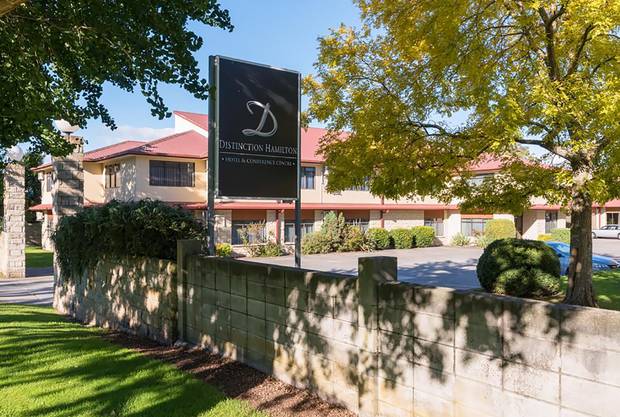 Local health authorities and Police are in communication with Hamilton businesses that may have come into contact with the individual, and are exploring CCTV footage to confirm their movements.

Air Commodore Darren Webb said they had talked to one liquor store on Te Rapa Road where we believe the man visited, and it has cleaned its premises as a result of our inquiries. Police ensured no one entered the store this morning until health officials confirmed it was safe to do so.

Health officials have advised the store owner that all necessary steps have been taken to protect the public.

Webb said a review of CCTV footage at the managed isolation facility has confirmed there were no close contacts.

A worker at the Thirsty Liquor outlet on Te Rapa Rd said although the man did not come into their store, a hotel staffer walked in about 8pm asking a peculiar question.

"But we don't have that kind of thing - German beer," he said.

Investigations at this point also indicated there were no close contacts outside the facility, he said.

"As we have said repeatedly - actions such as these are completely unacceptable," said Webb.

"Returnees are given clear instructions and information about what their responsibilities are. Managed isolation is a critical part in our defence against Covid-19, and it is up to each and every person entering this country to play their part and abide by the law."

"We take any breach of the Covid-19 rules very seriously. Wilfully leaving our facilities will not be tolerated, and the appropriate action will be taken."

Third escape in a week

This is third person to escape from managed isolation within a week.

On Saturday, a woman jumped two fences at the Pullman Hotel shortly before 6.20pm and was located soon after a couple of blocks away at 8pm on Anzac Ave. She is appearing in the Auckland District Court on Monday.

On Tuesday night, a man sneaked through a gap in the fence at the Stamford Plaza and visited a Countdown Supermarket before returning 70 minutes later.

Yesterday Webb and Cabinet Minister Megan Woods said a review of the system had been done, and there would be a 24/7 police presence at every one of the quarantine and managed isolation facilities.

There will also be a lead security person at each facility.

"We expect to have these people on site in the next 24 to 48 hours," Webb said yesterday.

Both escapees from the Pullman and the Stamford had been from outdoor smoking areas, but a decision had been made not to close these. Instead they would be monitored all the time, and in circumstances where that was not possible, they would be closed.