Supermarket queues appear to be extra long this morning, as stores across the country prepare to close for Good Friday tomorrow.

At Pak'n'Save in Māngere, Auckland the spaced-out queue stretched back along Bader Drive and halfway across the motorway overbridge.

Since the lockdown came into effect at 11.59pm on March 25, supermarket queues have typically started out long each morning but become shorter over the course of the day. 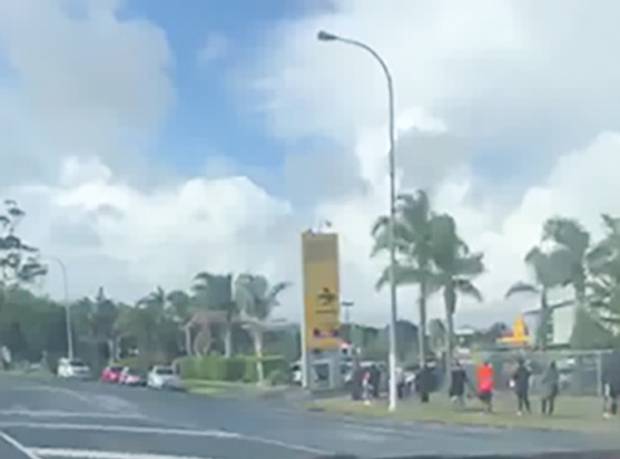 A long queue stretches out of Pak 'n Save in Mangere and back across the Bader Drive motorway overbridge. Image / Rangz Keepa

But on queuing website How Long is the Line? lines of 50 people have been reported for the past four hours.

At Countdown in Manukau and Pak'nSave in Clendon long - but fast-moving - queues have also been reported since early this morning, while in central Auckland's Grey Lynn both Farro Fresh and Countdown have reported lines 50 people long.

Prime Minister Jacinda Ardern announced last month that supermarkets would be closed on Good Friday but could open on Easter Sunday amid the Covid-19 crisis.

The decision on Easter trading was made by the Covid-19 committee, based on the need for staff to rest and for supermarkets to restock, while recognising people needed access to essential food. They also wanted to ensure people didn't panic buy.

Any employee who objected to working on Easter Sunday would not have to work, Ardern said.

A Countdown spokeswoman said customers were encouraged to keep shopping normally and not stock up, as that would put further pressure on the supply chain.

All stores would be closed on Good Friday but most would be open on Easter Sunday from 9am - 4pm. However alcohol would not be available for purchase, she said.

There was plenty of Easter stock in stores, and Countdown was working with confectionery giant Mondelez - maker of Cadbury chocolate - to get more.

Supermarkets have been encouraging physical distancing by limiting the number of people allowed in store at a time and marking floors at checkouts and deli counters to remind people to stay 2m away from each other.

Some New Worlds are also directing customers to leave reusable bags in the car rather than packing them at checkouts, to speed up movement through the store.