Some Tasman residents remain cut off as the country cleans up after former Cyclone Gita.

Golden Bay residents have been advised by Civil Defence not to buy panic supplies, and to only buy fuel for the coming week to ensure there is enough for everyone.

Food supplies would be delivered on Thursday following the closure of the Takaka Hill road, State Highway 60, which has left the community cut off.

Local commercial air operators were still running services for those who want to fly into or out of Takaka, Civil Defence said.

The state of emergency in Buller, Grey and Westland districts had been lifted on Wednesday morning but remained in placed for Nelson.

More than 130 people had spent the evening in welfare centres in Takaka and Motueka after escaping flooding.

Eighty were later escorted home in Takaka on Tuesday night, while 53 spent the night at the Motueka welfare centre.

Those who remained in the Motueka centre would have to await an assessment of their flood-damaged homes to find out if they could return home.

Tasman Mayor Richard Kempthorne said they had been concerned about coastal inundation but were fortunate there had not been a very high tide.

Takaka Hill road, State Highway 60, remains closed and Civil Defence says it will be several days until the road can be reopened to one lane. Firefighters were inundated with call-outs after the country battled with former Cyclone Gita, but South Island mayors say they dodged a bullet with little major damage.

Between midday Tuesday and 6am Wednesday, Fire and Emergency received 1300 call- outs, mainly for flooded homes, fallen power lines and trees, a spokeswoman said on Wednesday.

Buller Mayor Garry Howard says there was minimal damage to the district with only a few trees and "superficial stuff" affected.

"Things didn't eventuate as bad as we were expecting," he said.

Kaikoura was hit with heavy rain, closing both the coastal highway and inland route but Mayor Winston Gray said on Wednesday morning the "sun is shining".

He said there was no damage to the township itself.

Gita is now about 250km east of Canterbury and should continue to move away from the country, the MetService says.

However, heavy rain is expected to continue in Dunedin and North Otago until late afternoon. In the North Island, parts of New Plymouth are without water after a large tree fell and destroyed a pipeline but the airport is open.

All wind warnings associated with Gita are now lifted. 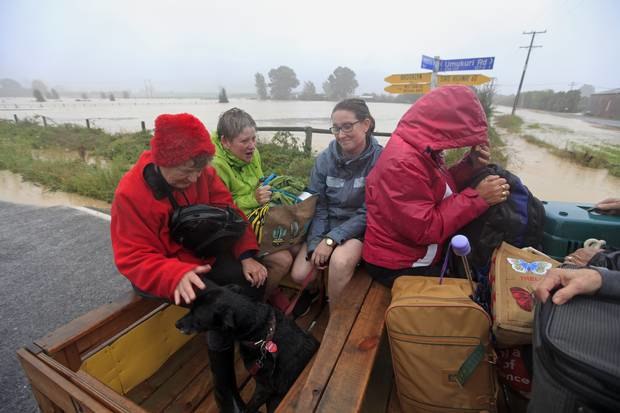 Shirley Rowling, left, sits next to her friend Val A'Court and dog Monty, after they were rescued from their Brooklyn home near Riwaka. (Photo / Tim Cuff)

MetService said many weather stations in the Canterbury high country had recorded more than 100mm of rain in the 24 hours to 2am. Closer to the coast, Ashburton had been hit with 86mm of rain, Timaru 83mm and Christchurch 59mm.

As Gita made landfall in New Zealand roads around the country were closed, states of emergency were declared and people stranded on roofs and in cars amid rapidly rising floodwaters.

Overnight about 100 tourists were trapped in south Westland, despite warnings to stay away. They included 42 Chinese tourists forced to spend the night sleeping in two buses in Whataroa, south ofGreymouth, after State Highway 6 was closed.

A further 25 people were taking refuge in the Whataroa Community Hall and more than 30 tourists were in community halls in Haast.

"Short of closing the roads early, there isn't any way we can avoid this. It's disappointing that some tour companies and tour plan bus companies continue to take scheduled services — but that's their choice."

On top of the flooding, Gita brought wind gusts of up to 150km/h and swells of up to 7m. 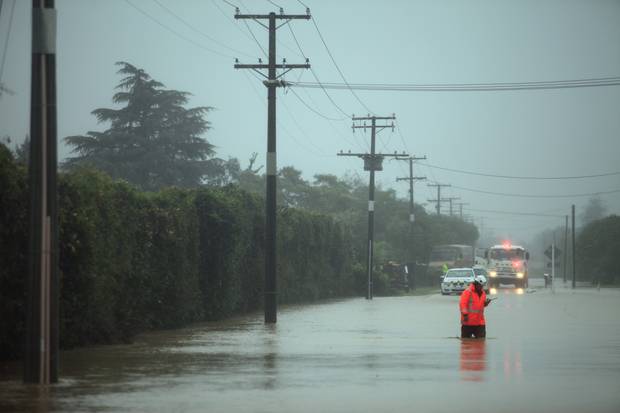 On top of the flooding, Gita brought wind gusts of up to 150km/h and swells of up to 7m.

A Fire and Emergency spokesman said crews were called to houses where roofs had been lifted off homes and other buildings, powerlines downed, trees felled across roads and homes and businesses flooded. Many call-outs were in Taranaki, Tasman the West Coast.

Fire crews had also been called to a number of landslides, including one in Takaka, where a main road had since been completely closed off.

Late last evening heavy rain and/or strong wind warnings were in place for most of central New Zealand.

Greymouth resident Blair Buckman, 23, said the power of the storm had ripped out fences and pulled off garage doors. He watched the roof of a house being peeled off like someone was opening a tin can. Buller District Mayor Garry Howard said a state of emergency was set in place after the Red Cross and police aired concerns about the coastal town of Granity. 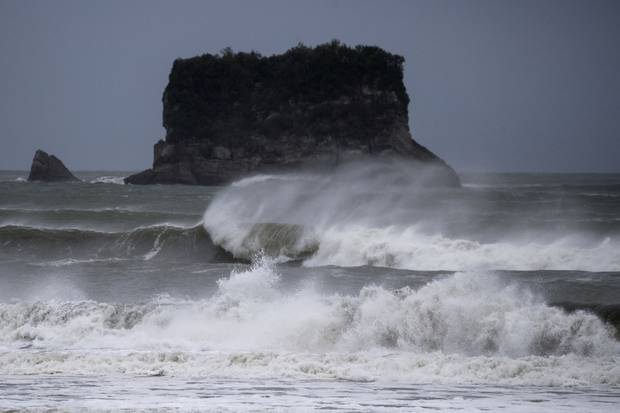 In the Westland Council area there were reports of trees down and damage to buildings and Hokitika Airport was closed for the night.

The downed powerlines meant about 4000 people were without power in Tasman district.

Dangerous Kitchen owner Yvonne Dorne said she was closing her shop in Takaka before its usual dinner service because it had lost power to all of the restaurant.

"Everything has died. Staff have been calling family and friends, they are all saying the power is out too." 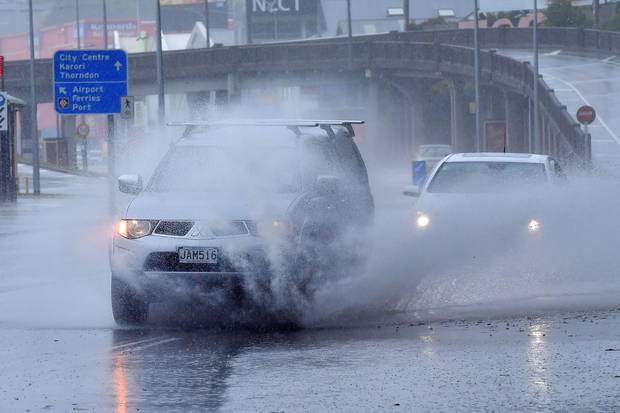 Other residents had reported that the whole town was out of power.

Air New Zealand cancelled all flights in and out of Wellington and four other centres as Cyclone Gita began unleashing heavy winds and rain.

Gusts of more than 150km/h were recorded at the Rimutaka Summit and 118km/h at Wellington Airport.

The downpour also led to record rainfalls, particularly in Kaikoura, where 194.4mm had fallen by about 7.40pm — four times more than the monthly normal, according to Niwa.

MetService expected the centre of the storm would pass over the upper South Island overnight with the worst of the weather fading by week's end.