Six bodies have been airlifted off White Island by the recovery team.

Police confirmed at 10.30am that the bodies would be transported by helicopter to the Navy ship HMNZS Wellington, which is anchored off the island.

A total of eight bodies were believed to be on the island.

"It's almost like a relief now it's happening. It's going to allow us to grieve and send our loved ones off in the manner they deserve."

Inman said he had pushed for the recovery to happen and was happy authorities had listened.

His brother Hayden worked as a White Island tour guide and it is understood he was killed when he went back to help others after Monday's eruption.

Earlier today police said the recovery operation was "going to plan" but would take longer than first thought, police say.

Deputy Police Commissioner Mike Clement said at 9.15am: "The recovery team is in the area where we believe the majority of the bodies are.

"The operation is taking more time than expected, this is due to the protective equipment the recovery team is wearing which can be restrictive and heavy but is necessary.

"Conditions for the operation are good in regard to the weather, sea state and the environment on the island."

Earlier, Deputy Police Commissioner John Tims said just after 7am today that a blessing had been held at sea with representatives of the victims.

"The family representatives are returning to the mainland and the operation to recover the eight bodies on the island has commenced."

The retrieval operation began at first light. It follows days of growing frustration from grieving families at delays in emergency services returning to the island to collect their loved ones.

Four days on from the eruption disaster, eight people are confirmed dead, the youngest a 13-year-old Australian schoolboy.

Nine others are still missing, presumed killed. The bodies of eight of them remain on the country's most active volcano. But he warned the mission - involving eight people on the ground and dozens more behind the scenes - was not without risk.

Shortly after first light New Zealand Defence Force "assets" would travel to the island assisted by specialist capabilities from other areas including police.

Helicopters, the HMNZS Wellington and specialist equipment will all be involved in Friday's operation, which is expected to last several hours.

Those returning to the island would wear protective clothing to guard against the toxic gases.

"They will go on to the island, making every effort to recover the bodies and return to the mainland.

"I have to emphasise that the risk has not gone. The risk is present." 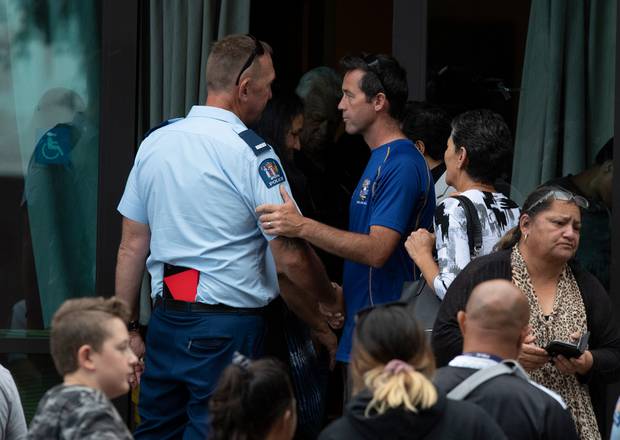 Despite the protective clothing the team will wear tomorrow, it won't completely protect them if Whakaari bursts again.

The nation's thoughts, prayers and love would be with those risking their safety, he said.

Police knew through eyewitness interviews and drone and other footage that six bodies could be seen on the island.

"But we know that we are missing eight people," Clement said.

The recovery of the six bodies will be the focus of today's venture, as the team deployed will likely run out of time to search for the remaining two.

He acknowledged the trade-offs of quickly getting bodies off the island and the impact this may have on the collection of crucial evidence.

"Nothing is foolproof, this is not a zero-sum game."

The plan is to move the recovered bodies from the island to HMNZS Wellington, before returning to them to mainland and their families.

But Clement stressed that today's actions could change, depending on weather conditions and the volatile nature of the volcanic island.

"A lot has to go right for us tomorrow to make this work," he said.

"The plan is contingent on a number of risk factors which will be assessed at
the time."

Yesterday, GNS warned the volcano remained at heightened risk, with a 50-60 per cent chance of another eruption in the next 24 hours. 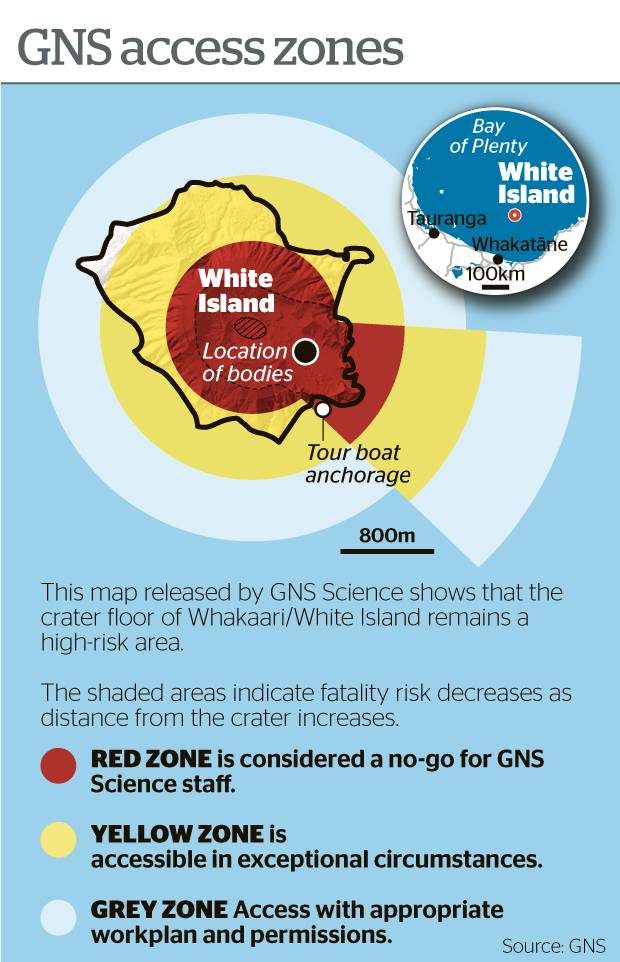 Whakatāne Mayor Judy Turner acknowledged a "growing sense of desperation" to bring home loved ones from the island.

"While we fully appreciate the need for the safety of any recovery team going onto Whakaari/White Island to retrieve our loved ones, we are now living with a growing sense of desperation to bring home those we know are there and those we love."

A grieving relative of teenage Kiwi guide Tipene Maangi yesterday took to social media to describe the family's torment and hit out at authorities for their response.

"Whoever is in charge of stopping search and rescue should be ashamed of yourself.

"We don't care how good you want to look on camera, give permission for the locals, families, to grab our cousin, for those families who lost their loved ones.

"Three days is too long."

Mark Inman, the heartbroken brother of one of the island's victims, wrote to Prime Minister Jacinda Ardern and asked for permission to stage his own recovery operation of his sibling's body.

Mark's brother Hayden Marshall-Inman was the first victim named after the disaster.

"With the current conditions of sunshine baking and decomposing his body, he's going from a situation where we could have an open casket to now more likely not having a body at all – due to your Government's red tape and slow decision making," Inman wrote to Ardern.

Due to the heightened risk, rescuers were yesterday considering a possible high-speed, in-and-out mission to recover bodies. Plumes of steam rise above White Island off the coast of Whakatane. Photo / AP

But police have not yet said it is safe enough to step foot once again on the active volcano.

"Today is no safer than yesterday and the day before," he said.

Increasing tremors had been recorded, as the chance of another eruption escalating.

Leonard pointed to maps which showed the active volcano is surrounded by three bands.

The red zone, bordering immediately around the eruption point on Whakaari/White Island, is a no access zone for GNS staff.

Only in exceptional circumstances would GNS staff enter the yellow zone outside the no access area.

Police did not name the pair, but friends of Australian 33-year-old Jason Griffiths last night released a statement, saying the Coffs Harbour resident was among the victims.

He was travelling with Karla Mathews, 32 and her partner Richard Elzer, who are still missing on White Island and presumed dead.

As the death toll mounts, bodies from other fatal incidents are being sent to Waikato as health authorities try to keep the Auckland mortuary free for victims of the eruption.