A young Auckland family are having to pay for accommodation on top of their mortgage as new tenancy rules mean tenants decide when they move out of their home.

The family returned from Australia just over a week before the lockdown, planning to move into their Botany Downs home in early April, having given notice to their tenants in February.

But new legislation that meant tenants could not be asked to move out during lockdown, unless certain criteria were met, changed all of that.

The Tenancy Tribunal said it was a "difficult situation" for the landlord and his family - who say they are paying about $1400 a week for temporary accommodation and furniture storage fees - but due to the legislation changes there was nothing it could do.

The tenants also acknowledged the difficulties, but they too had young children and had not been able to find an appropriate new home.

Hans Shawani, his wife and three children - one aged 8 and two 4-year-olds - arrived in Auckland from Australia on March 16, with Shawani due to start a new job.

Shawani had bought the property in 2006 while living in Auckland, but moved to Australia three years later, where he met his wife and they started a family.

It is their only property, and they are still paying off the mortgage, Shawani said. 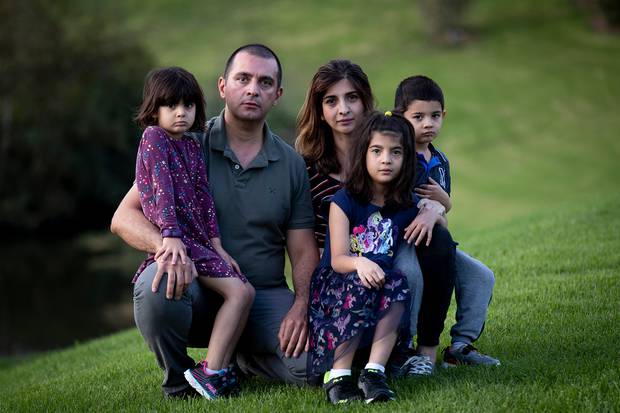 "It is our home, and we have been heavily impacted financially at the moment. I don't know what to do," says Hans Shawani. Photo / Dean Purcell

"I understand the need to protect tenants, but this is a really unique situation.

"We have given plenty of notice, this is the only place we can go - it is our home, and we have been heavily impacted financially at the moment. I don't know what to do."

Through a property manager, Shawani informed the tenants of the Botany Downs address on February 26 he and his family would be moving into the property, and gave them 42 days' notice, as required by law.

The tenants responded, accepting the move-out date of April 9.

The property manager sent a follow-up email on March 16, to which the tenants responded they were having trouble finding a new place in the area at such notice - they had children at school - but were committed to moving out by April 9.

However, on March 23, as the country prepared to go into lockdown at 11.59pm on March 25, the Government unveiled a range of measures to protect tenants, including restrictions on removing tenants from properties for a minimum of 90 days.

Under the new legislation, unless the parties agreed, tenants could not be asked to leave unless there were rent arrears of at least 60 days and proven "anti-social behaviour".

In the meantime, Shawani and his family have been paying $1250 a week for temporary accommodation, and another $120 a week to store the furniture they'd brought over from Australia.

To make matters even more difficult, Shawani was delayed by two weeks starting his new job due to Covid-19 restrictions.

His wife had not been working either, planning to help with the family as they tried to settle into their new Auckland life.

Shawani said he'd offered to financially support the tenants to find and move into a new property, but they declined, stating they wanted to wait until they found an appropriate place.

He said he approached the Tenancy Tribunal about six weeks ago seeking an order for a date to end the tenancy, but in a hearing yesterday the application was dismissed.

The Tribunal said it "absolutely accepts the difficult position the landlord is in", but there was no relief it could provide.

"Covid-19 and the Government's response to it has caused almost unprecedented
disruption to the lives of many people," the decision read.

"As difficult as the landlord's situation is, there is no statutory authority for the Tribunal to terminate this tenancy.

"The parties will need to continue working together to find a resolution, or await further statutory change."

The only possible order was a "consent order", but this required the tenants to agree to end the tenancy on a particular date, which they would not commit to until they had found appropriate new accommodation.

The tenants declined to comment when approached by the Herald, but in the Tribunal's decision it was noted they "understood the landlord's difficulties" and intended
to vacate the tenancy as soon as possible, but only when they found another suitable tenancy to move to.

Shawani said he understood the need to protect tenants over this period, and that the timing for him and his family was "very unlucky".

"It is a tough situation for them as well, I understand, they also have children. But we are desperate. We have given them plenty of time, meanwhile we are having to add to our mortgage to pay for our current accommodation. We have nowhere else to go."

They were also unable to find lower-cost rentals because they needed to commit for one to two years, he said.

He felt the legislation had not been interpreted correctly in their case, and wanted the Tribunal to set a date to end the tenancy, after the 90-day period had ended.

"It is not in alignment with the Prime Minister's directions that there will be a recognition to assess unique cases where people like myself are facing great difficulties where a level of equity in decisions need to apply, as opposed to being victimised for being a landlord.

"The order states only the tenants can decide on when they move out from our property whether it is within the next two months or two years or 10 years, which totally contradicts the Tenancy Act.

"I feel like we have been victimised for being a landlord, of one property."