Jacinda Ardern's travel plans have been thrown into disarray as bad weather sweeps the South Island.

The Labour leader has been campaigning in Invercargill this morning. She was due to catch an afternoon flight out of the Southland town but it was cancelled.

She is now heading to Dunedin to catch an evening flight back to the North Island.

Earlier, drivers were being told to stay off the roads, as heavy snows continues to fall over parts of the central South Island.

Transport authorities issued the advisory just after 11.30am, warning motorists that everyone planning to travel on highways or roads in the area should stay well away unless they are "well prepared" for the current conditions - which includes poor visibility.

Drivers are being told to stay completely off the roads, as heavy snow continues to fall over parts of the central South Island.

Transport authorities issued the advisory just after 11.30am; warning motorists that everyone planning to travel on highways or roads in the area should stay well away unless they are "well prepared" for the current conditions - which includes poor visibility. 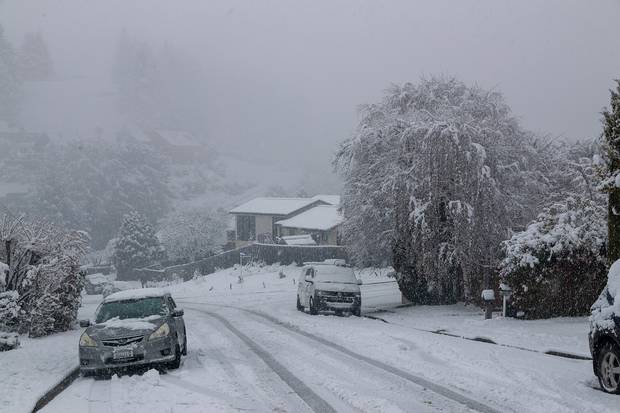 "Please check our traffic maps before you head out and be well prepared for cold conditions and slippery roads with poor visibility."

Some routes have been closed off entirely, while others have just reopened. However, the snow is still falling.

NZTA also reported that a number of vehicles have come off the road around Otago and Southland.

"Roads may be temporarily closed to clear cars or trucks from the sides of roads."

The heavy snow has also resulted in flights in and out of Queenstown being cancelled or diverted to other parts of the country.

Photos of the airport in Queenstown show flight equipment and gear covered in a thick coating of snow and the backdrop completely white.

Air New Zealand has cancelled its flights from Auckland to both places before Queenstown Airport tweeted at 10.45am: "Runway clearing is currently in progress and flights have been cancelled until further notice. The snow is expected all day and is continuing to fall heavily."

Just before 11.30am, the MetService reported that snow was falling all the way to sea level in Dunedin city.

"Leith Saddle, north of Dunedin, is getting snowed on now - although, not too surprising as it's actually a little higher above sea level than Queenstown."

Yesterday, an Air New Zealand flight from Invercargill to Auckland was struck by lightning shortly after take-off.

"There was a bright flash of white and a rumbling sound, and the screens and lights flickered a bit. It was just like when you have a power surge at home, but other than that, it wasn't very dramatic at all," he said.

Air NZ added in a statement: "Lightning strikes are not uncommon - aircraft are designed with this in mind and our pilots train for this scenario."

Snow is expected down to sea level in parts of the South Island today and tomorrow. Heavy snow warnings are in place for Fiordland and parts of Southland, and snow is forecast for Dunedin, Clutha and Central Otago, Nelson west of Motueka, Buller and Westland north of Arthur's Pass.

All the passes were expected to have snow and the only question was how heavy, he said, while the motorway heading north from Dunedin was likely to be affected in the cold snap.

The message for anyone travelling in the South Island was to be vigilant and check weather and road conditions before they set out.

"Conditions can change at short notice so be really vigilant ... if you can avoid travel that's what we'd be recommending."

Aucklanders can expect showers, mainly this morning. Strong westerly winds are also on the cards for the City of Sails and a temperature high of 14.1C is forecast.

An overnight low of 11C is expected.

Walker said the concern for the Auckland Harbour Bridge was wind speed, with the strongest gust overnight at 70km/h.

Some lanes on the bridge would be closed if wind gusts reached 80km/h, and at 90km/h they would look at closing the bridge, he said.

"Because we've got that temporary fix on there, if anything does occur on the day we're going to probably take a more cautious approach on closing the bridge."

A strut on the bridge was repaired last week after a truck, hit by a strong wind gust, crashed into it.

Auckland Transport will look to replace double-decker buses with single-decker buses for services over the bridge today as a safety precaution, but Walker said there were plenty of seats on other bus services.

Niwa's Nava Fedaeff said the South Island was in for very strong winds throughout the day, and widespread snowfall above 200m tomorrow.

Snow could get as low as sea level in places like Invercargill and Dunedin.

The strong winds coming into the west coast of the country are caused by a rapidly deepening low pressure system, common in the Southern Ocean but not often reaching as far as New Zealand, she said.

Northwesterly winds in the North Island bring a turbulent day for Auckland with gusts from 70-90km/h.

But the strongest winds, with gusts in excess of 100km/h, will be along the west coasts, around Christchurch, and in Wellington in the afternoon.

Motorists are being warned to stay up-to-date before hitting the road in many parts of the country; as snow showers affect some well used highways.

The Desert Road (State Highway 1) is among those affected from 7am to midday today when 1cm to 2cm of snow may briefly settle about the summit, the MetService said. More snow is expected later this evening.

Lewis Pass (SH7) is set to be affected up until the early hours of tomorrow morning, about 4am, when between 15cm to 2cm of snow may accumulate above 500m.

Other roads on the warnings list are Arthur's Pass, Haast Pass, Lindis Pass, the Crown Range Road, Milford Road and the Dunedin to Waitati Highway.

There are no warnings in force for the Napier-Taupō, Remutaka Hill Road and Porters Pass road.