An Auckland four-year-old who died at a childcare centre in 2016 was playing on a toy slide, a coroner's inquest has heard.

The inquest is underway into the death of Aldrich Viju at Angels Childcare Centre in Takapuna, in November 2016.

The court heard Aldrich was sliding down a toy slide with plastic stilts, tied together with an elastic cord so children could carry them.

The cord got stuck at the top of the slide and caught around his neck on the way down – resulting in him falling unconscious.

A former teacher at the childcare centre told the inquest she was outside with children that afternoon when a girl came up to her, saying "Aldrich is sleeping".

Jiae Kwon says she found Aldrich unconscious on a slide with a cord around his neck.

His heart was beating, but he wasn't breathing, she said.

A teacher and paramedics attempted CPR, but couldn't revive him.

Centre Manager Karen Douglas said the centre no longer has stilts – and has banned anything that could strangle a child on play equipment.

They've replaced the slide and sectioned off an area outside with new fencing.

A convex mirror has also been put up to cover a blind spot outside.

Earlier Gisha Viju, Aldrich's mother, asked for safety improvements at childcare facilities - including installing video cameras in playgrounds - in the wake of her son's death.

In March 2017, Gisha Viju spoke about the need for CCTV cameras overlooking playgrounds.

"We don't have proof to know what happened. That's why we are [saying] all childcare centres should have cameras in playing areas,'' she said. 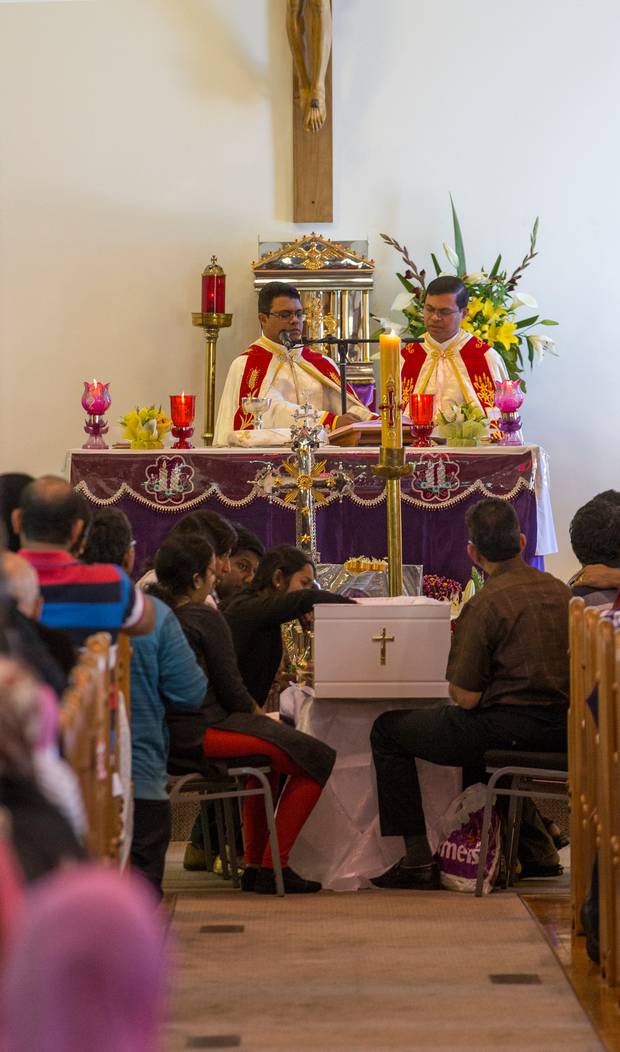 Mourners including family members gather around the casket at the funeral of 4-year-old Aldrich Viju. Photo / File

"My request is that proper actions should [be taken] to prevent this - like installing cameras in play areas and increasing the number of staff in childcare centres. "Try to avoid dangerous play equipment - there should be proper inspections to make sure of safety."

At the time, police described the boy's death as a tragic accident.

WorkSafe confirmed it wouldn't prosecute – after a lengthy investigation in 2017 cleared the centre of wrongdoing.