Boaties and fishermen are being warned as huge waves forecast up to 8m approach the North Island's west coast.

WeatherWatch NZ said the strong southwest flow across New Zealand plus a low pressure system over the Tasman Sea over the weekend has generated "dangerous waves" for western and southern parts of the country for Monday.

A new surge would arrive in the south later on Wednesday and across Thursday.

Wave heights in the west could be 6 to 8m on Monday afternoon, mostly in western Waikato and western Auckland, making conditions "incredibly dangerous" for small vessels. 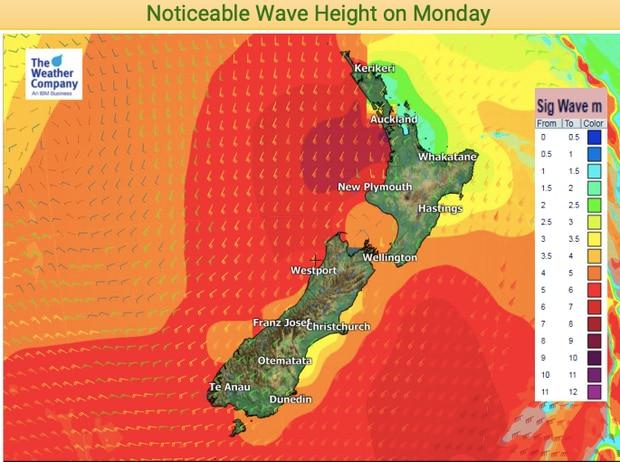 Wave heights and swells would reduce on Tuesday but around Wednesday and Thursday waves even larger than 8m would push back into southern and eastern parts of the South Island as the system surged up the country from the Southern Ocean.

Head forecaster Philip Duncan said the cooler flow over New Zealand currently was setting temperatures back to normal for this time of year.

"This week we have more localised southerly flows from just south of NZ and it's reset temperatures to normal, rather than making it bitterly cold or colder than normal."

On Tuesday, as the west to northwest winds developed again over the South Island, it would make for a warmer than average day once again by as much as several degrees above normal for the lower and eastern South Island.

The North Island had a fairly average Tuesday afternoon temperature-wise.