Hundreds of tractors, 4WDs, utes and other vehicles are descending on Auckland's CBD and other town centres today - part of the nationwide Groundswell protest.

Country has arrived in town, with the rural sector - and its town supporters - taking to the streets across the country to protest a slew of Government regulations.

About 100 vehicles, including a large number of utes and about seven tractors, arrived in Queen St, tooting their horns and waving New Zealand flags just after midday.

They travelled down Queen St, turned right into Customs St and doubled back. There were about 30 to 40 protesters, some waving flags, on Queen St and in Te Komititanga Square outside the Britomart train station.

"It's a great protest but it shows what New Zealand thinks of this precious Government at the moment and all the things they are doing. (It's) absolutely terrible," said one man in a vehicle.

A number of anti-vaccination protesters also turned up, including a SUV with a cross and signage saying "I don't want my six-year-old grandson to be injected with an experimental drug". 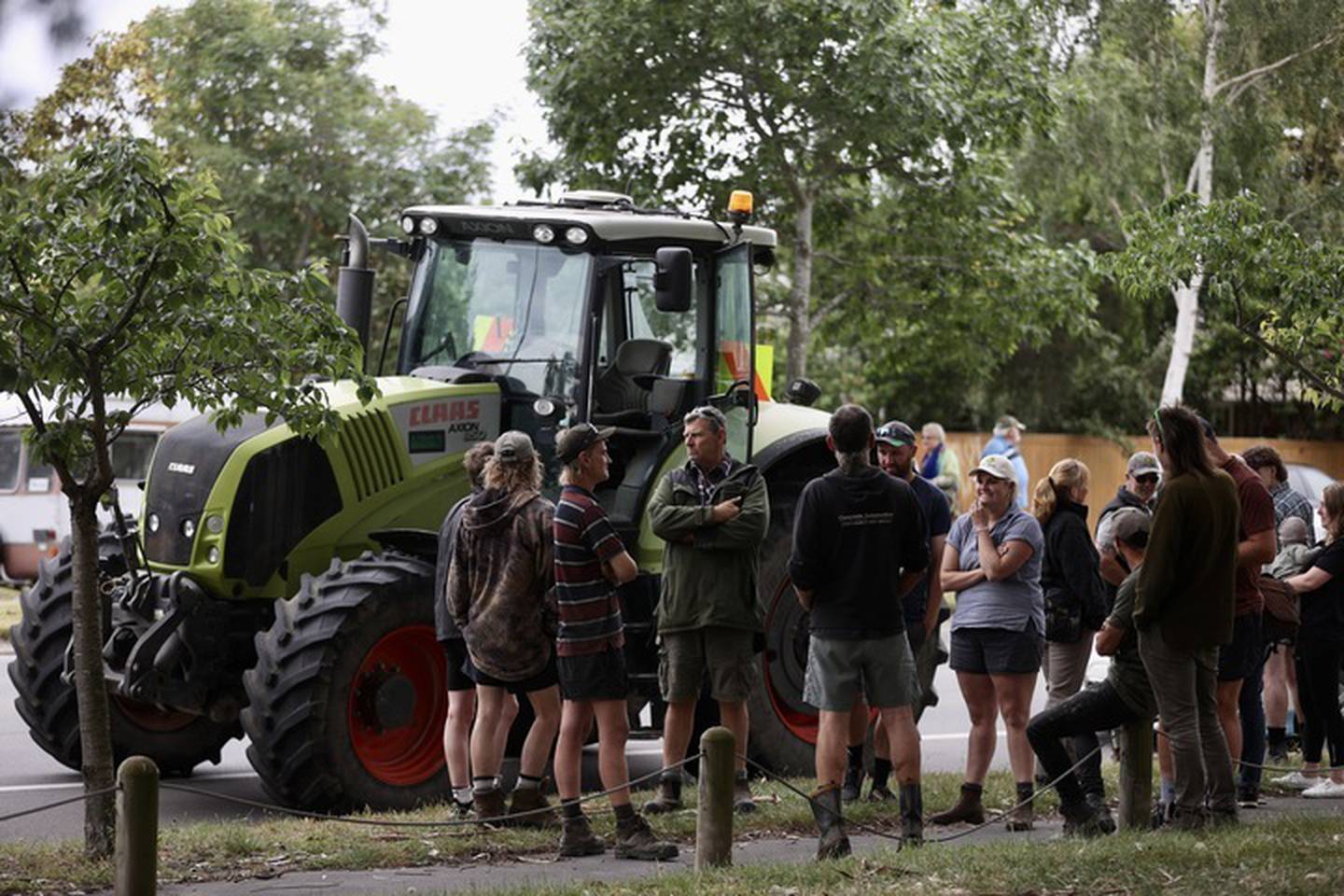 Up to 300 vehicles have turned up in Memorial Ave in Christchurch.

Christchurch organiser Aaron Stark says they don't have a full count yet, but they're expecting more people than last time.

"We're coming in from Rolleston now and we've got about 2kms of traffic behind us."

"We've had really good support from Police. We've got a couple of Police cars with us right now."

"I'm blown away with the amount of cars driving past down the motorway tooting and waving. Just people in general are turning out to support."

Stark said he's spoken to people today who have turned up in cars with signs that have never been at a protest before.

"One lady walked up to me before, she said 'I've never been to a protest, but something's gotta change. I'm here to support you'. I was like wow. She'd be well into her retirement years.

"My personal hope is that they [the Government] stand back and they realise it's not just a couple of disgruntled farmers from down south. This is now a New Zealand wide problem. More and more people are turning up and getting involved."

Up to 80, including some big rigs, are gathered at Whanganui racecourse ready to drive around town and show their opposition to the Government's newest regulations affecting farming.

"Let everybody know we are here and we are not happy with what's going on in this country" speaker Dougal Pidwell told the crowds.

The Mother of All Protests, organised by rural lobby group Groundswell follows a similar nationwide protest, the Howl of a Protest in July.

The group, according to its website, is seeking a halt to, and rewrite of, "unworkable regulations" relating to freshwater, indigenous biodiversity, climate change and the Crown Pastoral Land Reform bill.

It also wants a stronger advocacy voice on behalf of farmers and rural communities, solutions to environmental issues that are tailored to regional/district differences, and support for hundreds of grassroots initiatives such as biodiversity and conservation trusts.

Protesters are expected to be involved in more than 70 locations from Kaitāia to Stewart Island. Protesters have been told to stay in their vehicles and follow local Covid safety guidance, but the number of vehicles expected to be involved has prompted authorities to warn of possible traffic disruption.

There may be some traffic delays and disruptions in the wider central business district area today, police said in a media release.

They also sounded a warning to protesters to adhere to Covid-19 restrictions. Auckland is level 3 step 2, which allows outdoor gatherings of up to 25 people only.

"Police recognise that individuals have a lawful right to protest. However, this should not be at the expense of restrictions that are designed to keep our community safe.

"Breaches of the health order or other illegal behaviour may be followed up with enforcement action."

In Northland, Whāngārei District Council said on its Facebook page they'd been told central city and arterial routes in Whangārei would be the site of the Groundswell protest from about 1pm.

"Our traffic operations staff will take steps to keep traffic flowing as well as possible, however please be aware there may be some problems with travel times, parking, traffic lights and general road use while the protest is active." Groundswell organisers have published a list of approved slogans for the Mother of all Protests today. This person's sign is from the Howl of a Protest in July. File photo / Ethan Griffiths

As well as telling participants to stick to their bubbles, make way for emergency services and follow the road rules, organisers have also published a list of approved slogans for protest banners, including "Enough is Enough", "No Farmers, No Food" and "No Ute Tax".

Standing in for Minister of Rural Communities Damien O'Connor in Parliament on Thursday, Stuart Nash said - when asked by Act rural spokesman Mark Cameron whether O'Connor had met with Groundswell NZ leaders - he wasn't sure "what Groundswell stands for these days".

Based on what he'd read on their website it was "a mixture of racism, anti-vax etcetera, etcetera", Nash said, before going on to say the Government would continue to meet with farming leaders and engage with rural communities.

Groundswell Wairarapa called off their involvement in today's protest to avoid being hijacked by anti-vaxxers, but others are going ahead.

Groundswell leader Bryce McKenzie told Stuff the allegations were ''totally untrue" and they'd never said anything about vaccination. He and co-leader Laurie Paterson were both vaccinated.

In a press release this week, organisers asked those planning to show up to take care with the message they were trying to get across.

"With our opponents attempting to smear Groundswell, we need to be extra careful not to add fuel to the fire with off-message or offensive banners that the media will highlight."