The man who killed British backpacker Grace Millane has been sentenced to life imprisonment with a non-parole period of 17 years.

The convicted killer, 28, who still cannot be named for legal reasons, was found guilty and convicted last November for the December 2018 death.

This morning he was led into the dock, flanked by two court security guards in the High Court at Auckland. 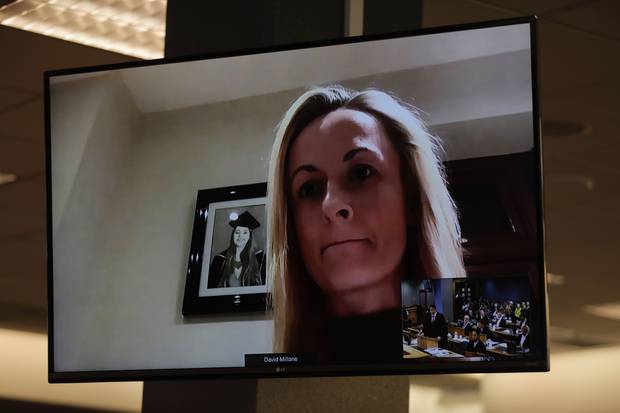 He said it was not a case where the strangulation was driven by rage or was premeditated. But there can be "no doubt" Millane was vulnerable.

"You were a stranger, she trusted you," the judge told the killer.

"You are a large and powerful man, she was diminutive.

"You were in a position of total physical dominance."

He said only two people will ever know what really happened in the killer's apartment, and "one of them is dead".

By the jury's verdict, Justice Moore said, the claim of sex gone wrong was rejected.

He continued to insist that Millane's death was "some terrible accident".

Some of the killer's lies to police were sprinkled with truth, which he must have known police would discover at some point from CCTV footage or other means, Moore said.

The killer will be referred to a psychologist while serving his sentence. But, the judge said, no mental health issues had been diagnosed to date.

The killer has no previous criminal convctions.

He accepted that the bruises found on Millane's arms were consistant with "restraint".

It was common ground that at some point during her strangulation she would have lost consciousness, but it remains uncertain exactly when.

"We do not know if Miss Millane struggled, she most likely did."

Earlier, Millane's mother Gillian read her statement via a video link from England. The news that her daughter was found in a shallow grave will "haunt" her for the rest of her life, she said.

She said the killer had "taken my daughter's future" and robbed her family of so many memories.

"The terror and pain she must have experienced at your hands, as a mother I would have done anything to change places with her.

"She died terrified and alone in a room with you." 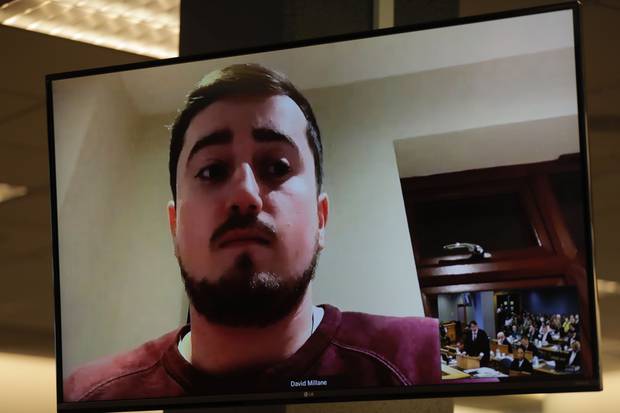 Grace Millane's brother reading his impact statement during the sentencing of her killer. Photo / Dean Purcell

She said she has needed weekly counselling sessions since her daughter's death and often sprays some of her perfume to help remember her.

"I never look forward to family and friend's events."

She added: "Grace was never just a daughter, she was my friend, my very best friend.

"I will miss my darling Grace until my last breath."

During her statement, the killer has had his head bowed in the dock and did not look the screen. The man convicted of Grace Millane's murder in the dock this morning. Photo / Dean Purcell

Millane's parents sat through every day of the nearly three week-long trial. They tearfully told journalists after the guilty verdict they would return to England and "try to pick up the pieces of our lives".

Members of the Auckland police team who worked on the investigation are at the proceeding today, including the three officers who spent the most time with Millane's family; Detective Inspector Scott Beard, Detective Sergeant Greg Brand and Detective Toni Jordan.

Millane, who was travelling the world, met her killer on the dating app Tinder before they shared some drinks at a few bars on the eve of her 22nd birthday in December 2018.

She died in the man's apartment in the CityLife Hotel.

But in court this morning, Crown prosecutor Brian Dickey said the murder displayed a high-level of brutality. Her death by strangulation was a "very personalised" way to kill a person.

Dickey said the actions of the killer after Millane's murder showed callousness, including his search for internet pornography and taking intimate photos of her dead body.

He said the killer "erotised" the murder which displayed "depravity".

But the murderer's actions didn't stop there as he tried to "cover up his tracks" and lie to police. 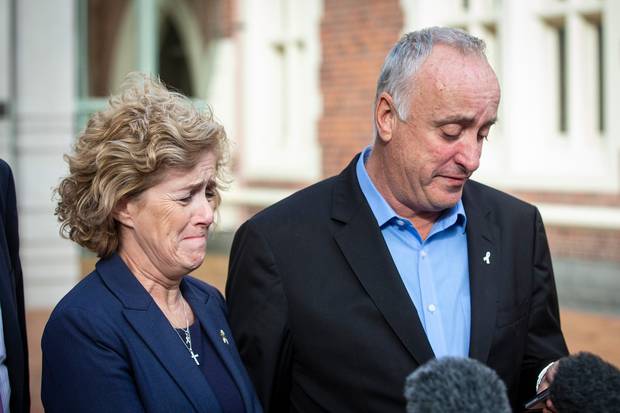 Grace Millane's parents Gillian and David have said: "Grace was our sunshine and she will be missed forever". Photo / Jason Oxenham

The verdict of the jury, Dickey said, showed this was not "rough sex gone wrong" but a murder.

But, the killer maintains his innocence and a 17-year minimum period of imprisonment is "not realistic".

He said, respectfully, the Crown's summary of the facts is "incomplete".

"This is not a case involving a high-degree of callousness, brutality or depravitiy. No more than any other murder case."

Brookie said it was accepted that "of course some uplift should occur to mark the post death conduct and concealment of the body".

But he said a total of no more than 12 years in prison without parole for the killer was "appropriate".

Brookie urged Justice Moore to sentence his client with the knowledge the killer and Millane had engaged in consensual sex.

"There is no evidence of any non-consensual attack on the deceased.

"There is no sustained attack, there is no evidence of any other violence, which we unfortunately see in many other murders."

Brookie said attempting to cover up a homicide and trying to hide or bury the body is "not too uncommon in this country".

During the couple's date, CCTV showed the pair appeared to be enjoying each other's company as they returned to his small downtown Auckland apartment.

The university graduate would never leave the room alive - her body later found dumped in shallow grave in the Waitākere Ranges.

After hearing from nearly 40 witnesses during the highly-charged and emotional trial, the jury's guilty verdict was unanimous.

They heard how the killer strangled Millane to death in his CityLife hotel room and then took "trophy" photos of her body.

He "eroticised the death of British backpacker Grace Millane" because of his "morbid sexual interest", Dickey told them. 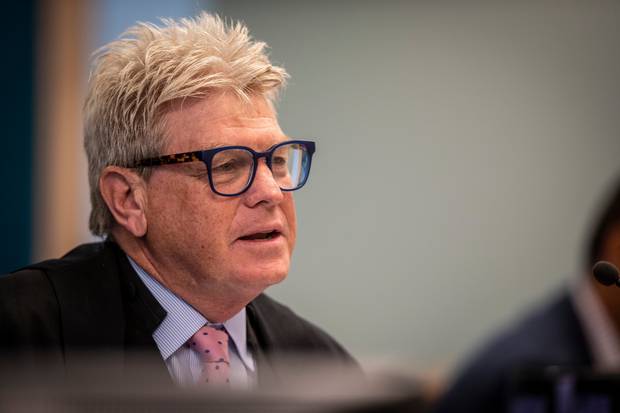 Justice Simon Moore, who presided over the high-profile trial, will sentence the killer. Photo / Michael Craig

Police used some of the six terabytes of CCTV footage they collected to track the killer's movements across Auckland before and after he killed Millane.

His internet search history, expert witness, and those who knew the murderer's inclination to dominate women was also canvassed.

Brookie said his client had "freaked out" before later lying to police and trying to cover up the homicide.