The mother of three young children killed in a deliberately-lit, horrific car fire in Brisbane has also died of her injuries - as family reveal she had been trying to escape her marriage to a "monster".

Hannah Baxter - who was reportedly doused in petrol by her New Zealand husband and ex-Warriors rugby league player - had been trying to escape their crumbling relationship by seeking refuge for her and her three children with her parents.

Hannah, 31, died overnight after suffering "extensive injuries" when Rowan Baxter, 42, approached the car with her and her children inside and set it alight on Wednesday morning in Camp Hill, in east Brisbane.

She had scrambled from the car, screaming: "He's poured petrol on me".

Inside her vehicle, their children Aaliyah, aged 6, Laianah, 4, and Trey, 3, all died. 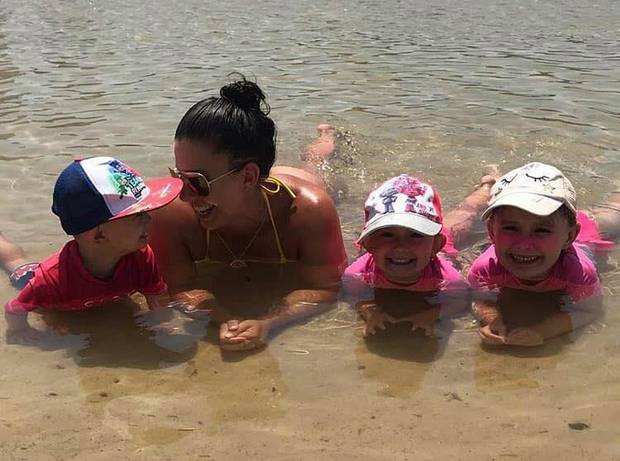 A donation page on Facebook, set up by Hannah Baxter's sister-in-law, reads: "As you may be aware my beautiful sister in-law and my nieces and nephew had their lives taken by a disgusting human being they called their father.

"For all those who knew Hannah or had even just met her once would know how much of a beautiful soul she was, her children were her life. All she ever wanted was happiness. Her children were only a reflection of her. Gorgeous happy kids who held a massive piece in my heart."

The page says Hannah's parents, Sue and Lloyd, had "exhausted themselves to try and help Hannah escape this monster".

Rowan Baxter, a member of the 2005 Warriors squad, was also confirmed dead at the scene, after reportedly stabbing himself.

It is understood the couple were involved in a custody dispute and police are combing the former Baxter family home for clues as to what happened in the lead-up to the tragedy.

Witness Aaron Snell told The Courier Mail Rowan Baxter was in "all manner of states" and jumped into the flaming car to grab a knife while bystanders tried to help.

Hannah Baxter was hosed down by neighbours who worked with fire extinguishers and a garden hose to put out the flames.

Snell said the heroic acts were met with anger by Rowan Baxter who was "protesting to stop putting it out."

A neighbour told The Courier-Mail a man who was washing his car when the incident happened rushed over to try to help Hannah Baxter as she jumped out of the car.

"She was awake and conscious and completely aware of what had happened," the neighbour said.

"Skin was peeling off her, and she held her hands up … bits were hanging off. It was really quite horrific."

The horrific incident raised questions as to how things went so wrong for a seemingly happy family that frequently shared tributes to each other online.

Hannah and Rowan Baxter were undergoing a separation, with Nine News reporting Ms Baxter and their three children had been staying with her parents in Camp Hill.

The Courier Mail reported the couple were in a custody battle over their three children. 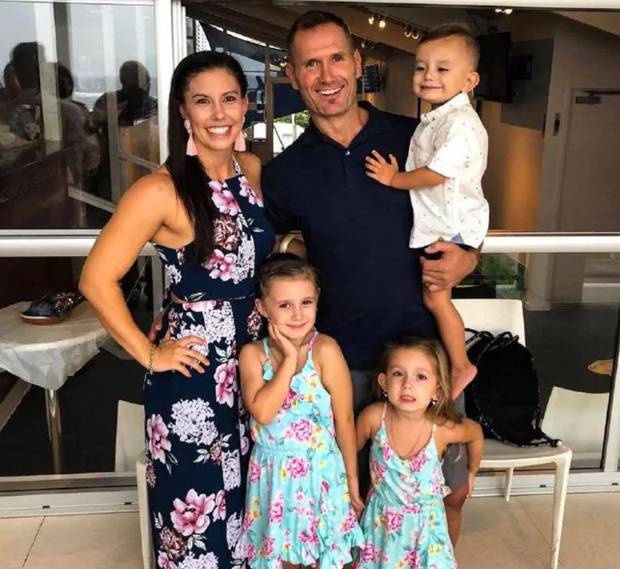 "Happy Anniversary to my partner in crime xo love you always & eternally," Rowan Baxter said on Facebook in October 2015, showing a beaming Hannah Baxter in their wedding photos.

That same day, Hannah Baxter shared an image of her husband lifting her into the air, forming a heart with her hands. 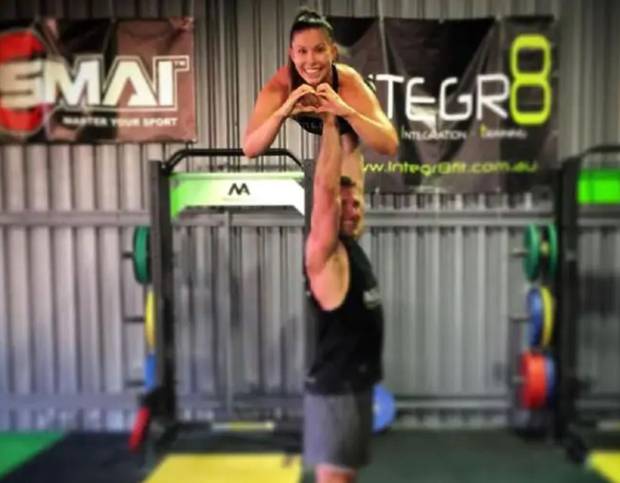 The couple on their third wedding anniversary in 2015. Photo / Facebook

"What other way would we want to spend our Wedding Anniversary, than by doing a workout together," she wrote.

"Some couples buy gifts or go out to dinner … (Rowan) & I train together."

She finished it with hashtags including #trueloverightthere, #partnerincrime, #soulmate, #bestfriend and #babydaddy.

In 2016, Hannah posted a picture from their wedding to wish her husband a happy birthday.

"We hope you have the best day," she wrote.

"I know we drive each other insane at times, but I wouldn't be without you. Love you to the moon and back."

Rowan Baxter grew up in Tauranga and was a contracted player with the New Zealand Warriors, although he did not play an NRL game.

He married Hannah Clarke, who was herself a trampoliner and gymnastic coach, and the pair turned their passion for fitness into a business, running the now closed Integr8 gym in Capalaba, a 20-minute drive from the scene of the fatal crime.

They regularly shared pictures of their family-of-five online, including the smiling children at the beach or swimming. Rowan Baxter called Hannah his "soulmate" and promised to be "the best dad and husband I can be until the day I die."

"Absolutely gorgeous Han you look stunning what a good looking family," one friend said on a photo uploaded by Hannah. 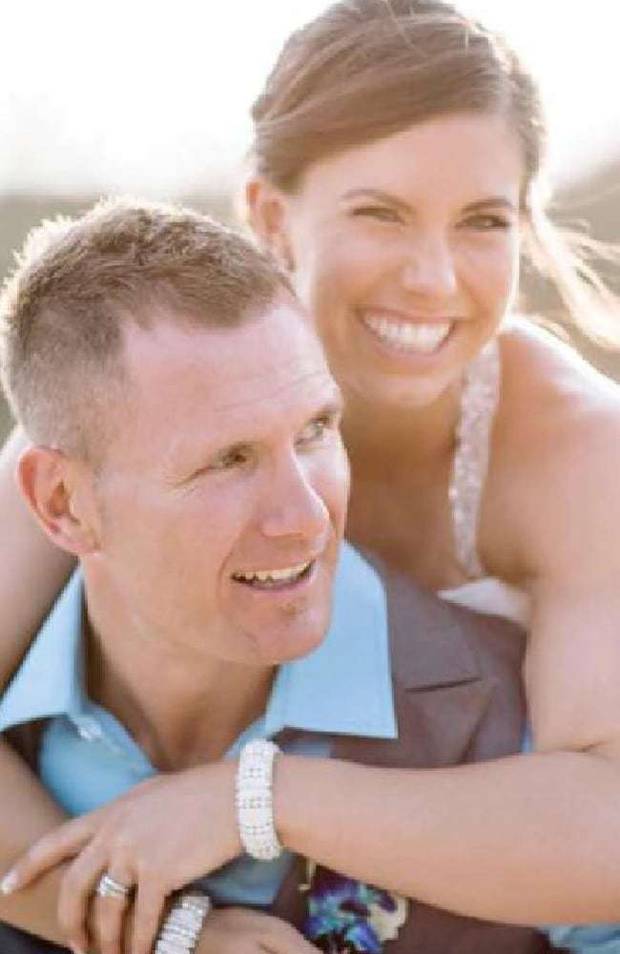 The wedding between Rowan and Hannah Baxter ended in tragedy on Wednesday, with the entire family killed in a horrific incident. Photo / Supplied 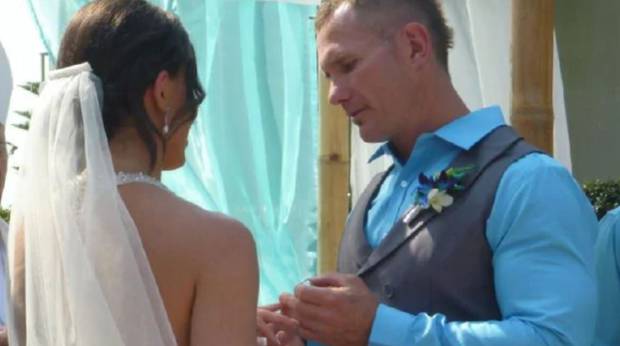 Hannah and Rowan Baxter on their wedding day. Photo / Facebook

Hannah Baxter described herself on Instagram as a "proud mumma ... in love with my two little princesses and little prince".

Last September, sharing a post from the gym's Facebook page, Rowan Baxter wrote: "My wife does a brilliant job with the kiddies".

"T-R-E-Y. Love you to the moon and back #daddy," the former New Zealand rugby league player posted on his own Facebook page last week, with a photo of his smiling young son. 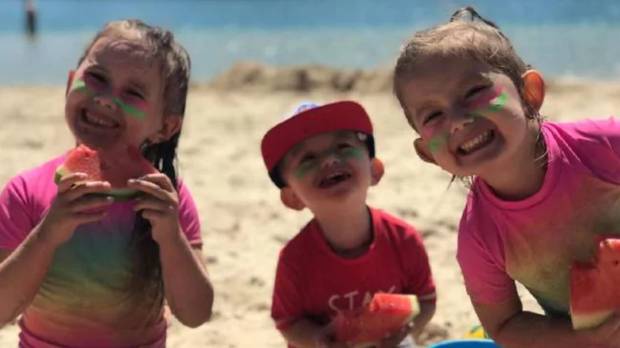 The Baxters' three children all died in the blaze. Photo / Facebook

But other comments on there hint at the ongoing troubles.

"Chin up brother everything will work out just hang in there my bro a lot of people care about you and the situation your (sic) facing," one friend wrote underneath a post on his Facebook page.

On December 30, he shared a photo with his three children captioned "Goodnight my beautiful babies. Daddy loves you all very much. I miss you all."

Two days later, on January 1, he captioned a photo: "Goodnight ratbags always in my heart."

On Wednesday that image of a perfect family life turned to tragedy when Rowan Baxter reportedly bought a jerrycan of petrol at a nearby petrol station.

Eyewitnesses said a woman, believed to be Hannah Baxter, jumped from the burning car containing his family, yelling: "He's poured petrol on me".

Locals described frantically trying to douse the mother of three with water from a garden hose while hearing explosions that sounded like a gas canister exploding.

Photos of the scene show at least one charred car seat in the back of Hannah Baxter's burnt white vehicle which was towed from the scene along with a black Nissan Murano. 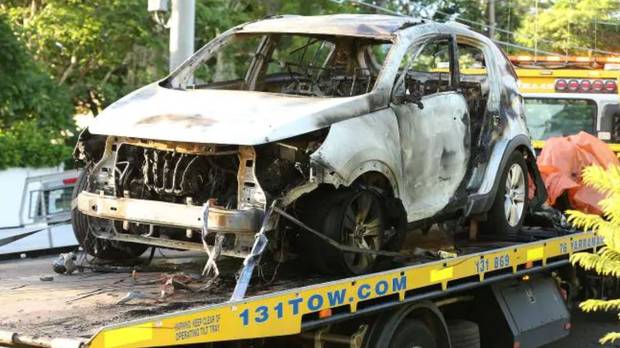 "Preliminary investigations indicate the woman was driving the car and the man was in the front passenger seat prior to the incident," police said in a statement on Wednesday afternoon.

Brian Cavanagh, a neighbour and friend of Hannah Baxter's parents in Camp Hill, told Nine News on Wednesday the deaths of the children were "beyond comprehension".

Cavanagh said he had spoken to her father and they couldn't figure out how she was in the car with Rowan.

Local man Murray Campbell told reporters at the scene he "saw the vehicle in flames".

"It was just horrible," he said, "and the explosions".

"Someone was hosing her with a fountain effect," he said, calling it as an "awful situation".

"Somebody did step in to try and help that was close by," he told reporters at the scene.

"I think he tried his best to get to the car."

That man, believed to be Michael Zemek, also sustained burns and was taken to the same hospital as Hannah Baxter for treatment, police said.

Flowers have already been left at the scene of the horrific crime as friends start paying tribute.

"My heart is broken today!" one woman said on Facebook.

"Things like this just shouldn't be able to happen to anyone, let alone someone you know, someone you call your friend, someone you've watched grow up to be a lovely athlete, a beautiful smiley women and a spectacular mother!

"My heart is breaking for everyone who knew her and her precious babies but especially the Clarke family."

• White Ribbon: Aiming to eliminate men's violence towards women, focusing this year on sexual violence and the issue of consent.

If you are reading this information on the

website and you're worried that someone using the same computer will find out what you've been looking at, you can follow the steps at the link

to hide your visit. Each of the websites above also have a section that outlines this process.