Like many of us who dream of a career change, Sarah Harris was hungry for a job away from the desk and the glare of the computer screen. So the 27-year-old gave up her steady pay cheque to re-train and starts a new year with a new career.

I was walking home from work in August last year when a blonde woman smiled and waved at me.

She was a police officer, and I was surprised by how feminine she looked with a face of mascara and blush.

She didn't fit the stereotype. And she made me think - if she can do it, why can't I?

Before then I'd been working as a social issues reporter at the Herald and I found the job frustrating.

I was either interviewing amazing people who made my life seem boring, or talking to people who desperately needed help and offering them little more than a 500-word article.

I was hungry for a job away from the desk and the endless glare of the computer screen.

Policing appeared to be perfect.

You get off your arse and out of the office, you use your brain and social conscience, you get to help people, you can work anywhere in New Zealand and there are countless opportunities within the organisation.

A normal day at the office has changed drastically for me now.

Instead of stressing over my corporate ensemble (I was always a scruff) I get to put on my purpose-built uniform, which contains a delightful number of pockets. Instead of meeting memos, my work phone is full of photos of drugs, offenders, crime scenes and injuries. 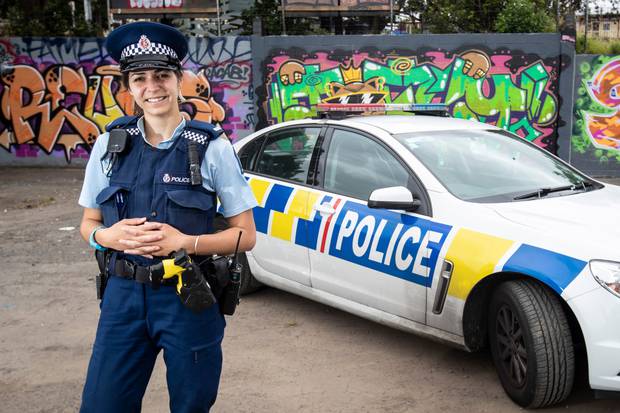 Sarah made the change from reporting crime and social issues to being on the front line. Photo / Jason Oxenham

I've been inside flash houses and dirty houses. I've looked through every piece of clothing and shoe in a man's closet during a meth search warrant. I've rubbed the backs of crying girls and been hugged by those needing comfort. I've sped all over Auckland in car chases and weaved in and out of traffic to keep the public away from gun-wielding offenders. I've been into a morgue and seen dead people propped up on hospital beds facing the wall, like they're waiting to get a haircut.

In August 2017 I started the application process to join the police. It was like a treadmill that didn't stop. The biggest hurdle was the run. I had to run 2.4km in less than 11 minutes and 50 seconds to pass the fitness test.

And I hated running.

Somehow the excitement of a whole new career motivated me - I trained every second day for months and I ended up with a decent time of 11 minutes and 11 seconds.

In May last year I was shipped off to the Royal New Zealand Police College, filled with anticipation and apprehension.

At college you're like an animal in a zoo. You have everything you need: a gym, pool, classrooms, lecture theatres, TV lounge, laundry, a firing range and three hearty meals a day. You can go weeks without needing to leave.

Classes ran from Monday to Friday 8am to 5pm. Dinner was at 5.30pm. After that you needed to fit in some fitness training. Any spare time was devoted to study, sleep and gasbagging in the corridors.

There's a life-sized "crime house" that replicates a trashed house on the bottom floor and has an observation deck for your classmates to watch your pain on the second floor. You enter and attempt to deal with knife-wielding, cushion-throwing imposter-offenders. More than one recruit "lost their life" in that place.

That's where I had my Taser assessment. The instructor was dressed in a huge black suit so he wouldn't get pierced by the prongs. But that suit doubled as an intimidation tactic, he looked like the monster from under your bed.

The black monstrosity started swearing at me, then biffed a cup of water at me. I tried to talk him down.

The talking stopped when he grabbed a knife and lumbered towards me. I Tasered him. Except I was so tense that I pushed the button twice sending out a double Taser - an automatic fail!

Sarah with her proud father Chris Harris as she graduates from Police College. Photo / Supplied

I was gutted. My dad thought it was hilarious that his gentle daughter failed due to "an excessive use of force". Fortunately, with a bit of practice I passed the re-sit.

The tactical skills were a small part of college compared with the academic grunt work. I've been to university but the intensity of study far surpassed that. Our rooms looked like the scene from A Beautiful Mind with Post-it notes and flash cards tacked up on every wall. We'd test each other at random and spend hours memorising which law goes with what section number. The hard work paid off when every one of my wing-mates passed the final exam.

I've always been a bit of a dork - not really into drinking or partying, I'd rather go hiking than hit the clubs. At college I found some equally-sensible kindred spirits. Beautiful friendships were forged through mud runs, firearm drills and testing each other on New Zealand legislation.

There's a stereotype that people become cops for the guns and car chases, but almost every one of my classmates said they chose the job to help others.

The recruits were diverse and, while fit, weren't picked on brute strength. Some tiny women were in my wing who were just as kickass as anyone. Both the leadership award and top-of-the-wing award went to petite women.

Prior to college I'd never touched a gun in my life. In two weeks on the gun range I learnt that shooting bullets smells like hair dye, that your fingers peel from handling the oiled metal, that the weight of an M4 assault rifle makes your back ache, and that aiming is hard.

The target posters were amusing mock-ups of classic balaclava-wearing, shotgun-toting "baddies". It was motivating as we progressed through the days to see the bullet spray get tighter and tighter on our targets.

Although, I could never master the damn pistol. You're meant to keep the tension in your non-dominant hand (my left) and relax the trigger hand, pulling only very gently with the tip of your finger to release the trigger. For the life of me, my trigger hand would not relax.

But still, I managed to get through the assessment with 19/20 shots on target.

I came out of college, keen to hit the streets, thinking I could be useful straight away - wrong. I had the same misgivings when I went from my month in the field training unit to the frontline. I underestimated how much there was to learn - and that's what makes the job so interesting.

Now I work frontline at Avondale Police Station. We respond to your 111 calls. When we don't have a job to go to we hunt for people causing trouble. And that's balanced with a never-ending tide of paperwork.

To bust some myths:

A cop once told me "cake is currency". You bring cake when you start on section (your team), when you finish on section, if you get into the media (yes I need to bring a big cake for this) and sometimes "just because". Cake is around more often than not. 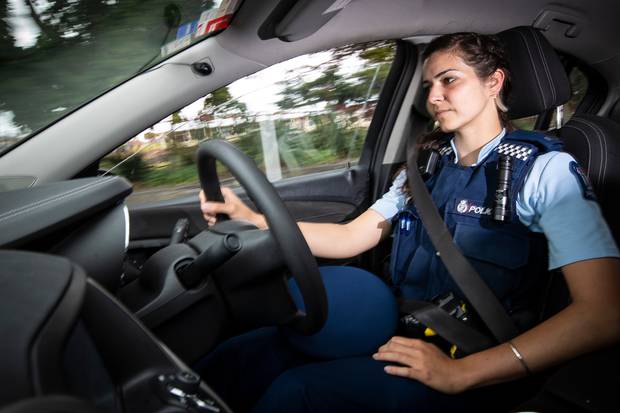 'There's a stereotype that people become cops for the guns and car chases, but almost every one of my classmates said they chose the job to help others.' Photo / Jason Oxenham

Working all night and sleeping all day can have its perks - like being able to go to the beach when it's sunny and getting errands done when shops are open.

But being sleep-deprived can haunt you for days. I really struggled at the beginning to get enough sleep. My routine has since improved and I'm proud to announce I slept for six hours straight after my last night shift. It's a work in progress.

Family harm is one of the most common incidents we go to. It used to be called family violence but we use the term 'family harm' now because it encompasses all types of destructive behaviour in unhealthy relationships, including non-physical stuff like financial control and emotional manipulation.

Family harm jobs are meant to make up 60 per cent of our time and police get about 100,000 calls a year.

What struck me when I started is that it's not always the stereotypical man beating his missus.

People like thinking about these incidents as black and white, good and bad, someone's the victim and someone's the offender. But family dynamics are complex and often they're shades of gray where no one is 100 per cent wrong or 100 per cent innocent.

I've arrested a tiny woman with no criminal record for holding a knife to her boyfriend. I've been called to fights that started over him criticising her makeup, when to wash the bedsheets or someone spilling the KFC. I've seen parents in despair with their out-of-control grown-up children.

There are the people who you worry about. The ones who won't let you in. The ones who bear scars on their faces from a brutal assault, but insist they don't want their partner arrested for smashing the door in with a rock.

You see the damage alcohol does. One of my busiest night shifts came after a beautiful Saturday. Perfect drinking weather. Everyone we arrested that night was drunk. You get used to repeating yourself because intoxicated people struggle to comprehend what they've done. 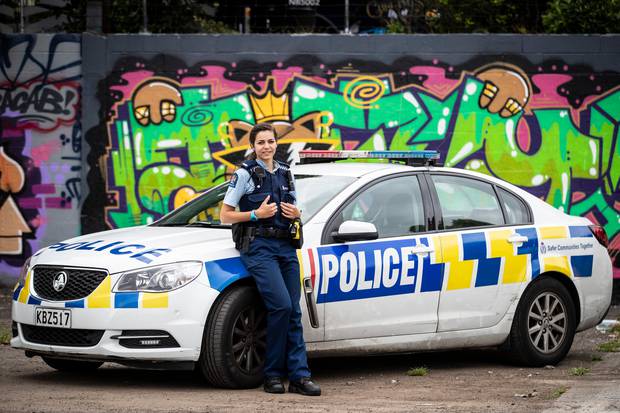 'One of my busiest night shifts came after a beautiful Saturday. Perfect drinking weather. Everyone we arrested that night was drunk.' Photo / Jason Oxenham

It seems obvious, but it's taken some getting used to - people lie to police. They lie about their names, where they live, what they are doing. It's amazing the number of people who don't know their friends' names or where they live. Or how almost every unregistered motorist has "only bought the car a couple of days ago".

One man I pulled over looked me in the eyes and swore on his life that he had nothing to do with the petrol drive-off his car was seen at. Then I read out the description - male, Caucasian, slim build, blue eyes, black jacket, blue jeans. It fit him to a T. He crumbled and admitted it all.

When I got out of college I thought we were going to fight for our lives every day. They prepare you for the worst by playing out life-and-death scenarios, having to Taser, pepper spray or even shoot people. I've been pleasantly surprised by how rarely people kick up at work. Policing is more about communication skills than anything else. The best cops can talk their way out of almost anything.

But you have to accept that part of the job is the risk you may have to take drastic action to prevent something tragic from happening. To shoot someone is my personal nightmare, fortunately it rarely happens, but I accept that it comes with the territory.

I love the job because it's real. You're dealing with real people, real problems and constantly solving issues to get the best for everyone. It brings so many new experiences, from the tragic to the joyful and the bizarre.

I'm not hungry for fulfilment any more.

New Zealand Police is divided into 12 districts; nine in the North Island and three in the South.

In 1941 the first 10 policewomen were recruited

In December, the number of female constabulary officers reached 2000 for the first time