At the police dog training centre in Upper Hutt, a tumble of furry bodies quiver, yelp, and poke curious noses at nearby ankles.

It's hard to imagine in less than a year and a half, they'll be all gnashing teeth, booming barks, and powerful muscles.

In fact, nearly half of them won't make the cut.

New Zealand Police national co-ordinator of dogs, Inspector Todd Southall, says puppies can be pulled out of training at any time - and often are.

"We breed them here at the dog training centre," he said.

"The training can start at eight weeks, some of the real basic training we teach them is to return to the handler, to leave a toy or an article." 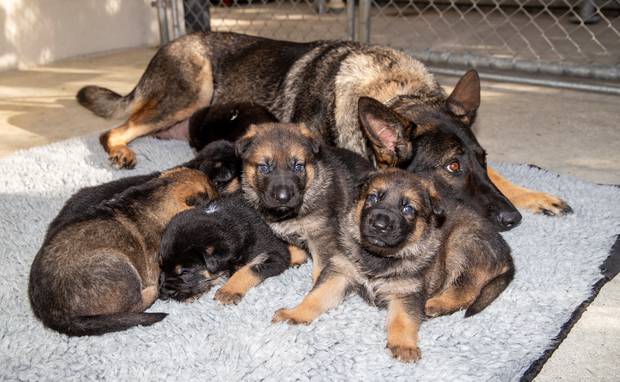 The basic training is carried out at foster homes around the country. Police have about 120 homes where people are willing to foster the puppies until the age of nine months, at which point they will start full-time training at the centre.

The first nine months is where most of the weeding out happens.

Southall said there was about a 55-60 per cent success rate for puppies to reach full-time training, with many dropping out up until that point. After nine months, only about five per cent fail.

The main reasons a dog might fail are medical issues, nerves, or a lack of drive.

He said one obvious failing point for dogs was an aversion to "shiny floors".

"Quite often a foster home will have a dog, thinking it's got everything, and then they will take it into a mall or a shopping centre and before you know it the dog's on all fours not moving, so they've actually got to lift it and carry it out."

He said it was "pretty embarrassing" and nobody knew what caused it, but some dogs simply couldn't cope with reflective surfaces such as lino or tiles.

"As you can understand, for an operational police dog we need it to go into every environment possible."

It could sometimes be easy to tell with the young puppies whether they were going to have issues with nerves - they might be particularly cautious or wary of their surroundings, or might not like going into dark areas, for example.

Southall could not say how much failed police dogs cost them, but said a fully-trained dog cost police about $40-50,000 including the handler and whole training package.

The dogs that failed were usually adopted by the people from their foster homes.

Marco the black labrador was one lucky pup who found a permanent home with his fosters.

"He didn't have the right drive for detection work so he kind of failed on that basis," said owner Brian Moyle, an Inspector based at the Police National Headquarters.

"When I played fetch with him, you might throw the ball out once. The third time you would be the one going to get it." 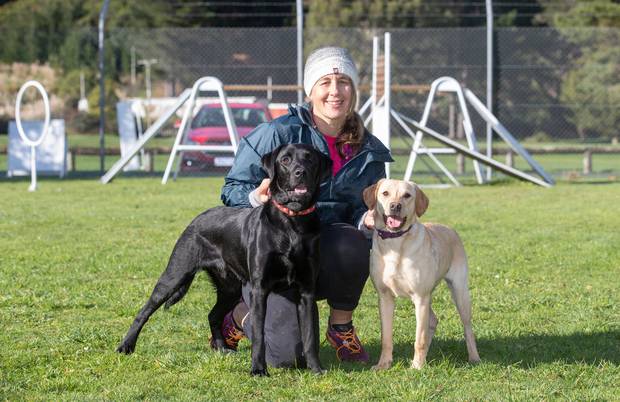 Erin Moyle, with Marco, left, who failed as a police dog, and Poppy, who is currently in training. (Photo / Mark Mitchell)

Moyle can see the difference between Marco and another dog they have started fostering, golden lab Poppy.

"She's totally different to Marco. Lots of drive, lots of energy, you can throw the ball kind of all day .... she'd be out and back and out and back."

He thought she would be "ideal as a working dog".

Moyle's family took Marco on as their pet when he failed to make it as a police dog, and say he makes a great companion instead.

"We love him to bits ... we're lucky to have him continuing to be part of our family."