A South Auckland family have been left with nothing but the clothes on their backs after a fire destroyed their home and everything in it.

Now the family of 10 are staying in a couple of rooms in a motel until they can find another house but they'll never recover precious belongings and photos.

Ray and Reta Milovale, and their eight children, stood watching the flames engulf their Papatoetoe home on Sunday night, overcome by loss and helplessness.

Only four days earlier, they had laid Reta's mother to rest after she passed away from ovarian cancer. Extended family were staying with them from Australia and Samoa.

Ray had just returned home from work on Sunday and was watching TV in bed when his 3-year-old son came screaming down the hallway and alerted him to the fire.

The smoke alarms went off and Ray rushed to the lounge to find a small fire on one of the sofa cushions.

"I grabbed a pot of water and chucked it over it, but it didn't do anything, so I ran outside to get the hose and by the time I got back the whole lounge was just gone.

"It was so fast, I wasn't gone for more than a minute. I've never seen anything like that," he said.

While Ray continued to fight the fire, Reta and her father worked to get the children to safety. 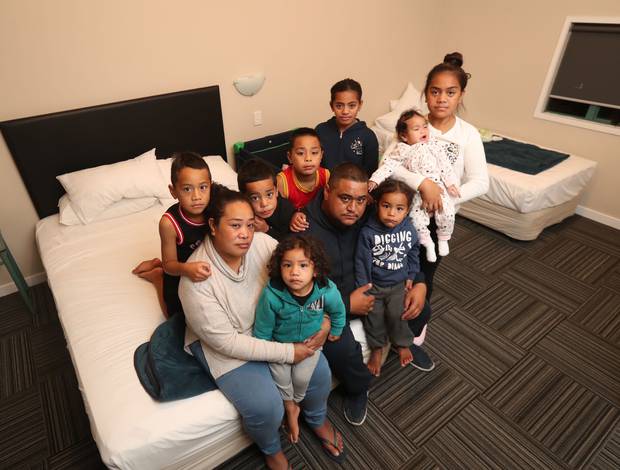 In a nearby room, Ray's brother-in-law, his wife and three children had to smash a window to clamber out to safety.

"We all went to the road and actually watched our house burn down. I just broke down and started shouting and screaming. My wife was crying," Ray said.

A Fire and Emergency spokesman said four crews arrived just before midnight, to a house well involved in fire.

Crews extinguished the fire, and left at 2am, only to return again at 8.40am after the fire flared up again.

"We lost everything in that fire. We only had the clothes on our back," Ray said.

"The million-dollar question is what caused it. That is what we are still waiting to find out."

The house was owned by Housing New Zealand, who have arranged for the family to stay in a motel until they can find them another suitable home.

However, the family did not have contents insurance so will struggle to furnish a new home and are mourning the loss of precious items and memories.

"We don't come from a wealthy family and kind of struggled to even fill the house with furniture, so to see everything we had go up in flames was the hardest thing in life," Ray said.

Reta said there were no words to describe what the family had been through.

"I am still trying to come to terms with it. We have questions going through our heads as to 'why us?'

"You see it on TV and happening to other people, and when it happens to you it is something totally different and you don't know how to feel. You are numb," she said.

"We've lost our family photos, my mother's belongings and all the stuff she kept from her late brothers and sisters.

"My kids' fine mat ['ie toga, a finely woven mat that plays an important part in Samoan culture], that was from my husband's family, that is something that was really close to me. We've lost everything that we ever had our names to."

Ray's sister Crystal Fetalaiga has created a Givealittle page to help the family get back on their feet.

"Any help during this difficult time is much appreciated," she wrote.

"The funds will go towards setting a new family home with baby clothes, bond for a new rental property, furniture, kids' school uniforms and household items."

"There has been tremendous generosity from people coming through with clothing and food - something to get us by until we get a house," Reta said.

• Go to Givealittle to help the Milovale family.