A young Auckland butcher who died suddenly at the weekend has been described as "the absolute heart of his family" and a "ray of sunshine".

Roy Green and his wife Amanda owned the Mad Butcher store in Pukekohe, in south Auckland.

Their company, Green Family Butchers Ltd, went into liquidation a week ago, after about five years of running the store.

The Herald understands the Tuakau father was also struggling with other personal issues unrelated to the business.

Green was a well-known and popular figure in the community, often sponsoring local sporting and charity events.

In a statement provided to the Herald, Green's family said he was "an awesome dad and was the absolute heart of his entire family".

"Roy was a ray of sunshine for us all. He is loved very deeply by his wife and kids, his mother and siblings, and was extremely close with his extended family and the wider Pukekohe community.

"Roy was so proud of all that he had achieved - he owned his own business and had a beautiful family.

"We all love him so dearly, and are so grateful to have had him in our lives. Our Roy, you will be eternally missed." 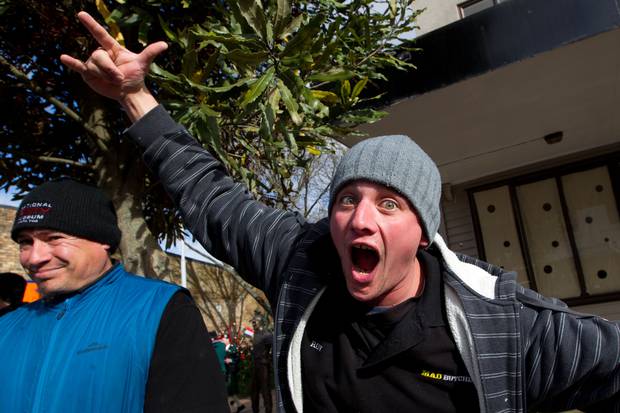 Green was interviewed by TVNZ during the level 4 lockdown, saying it was a struggle to pay the bills and his employees with no money coming in.

Butchers were controversially not allowed to open during the lockdown, despite supermarkets being allowed to sell meat.

At the start of the lockdown Green posted to Facebook saying he was enjoying the four-week "holiday" with his young family and telling Franklin locals to stay home and stay safe.

But he later told TVNZ that he was "struggling big time", with his store's empty shelves and fridges visible in the background.

"We need to sell meat to actually make any money and at the moment we're not selling meat so we're not making any money."

The shop had been turning over $92,000 per week prior to the lockdown but was making no money in level 4, TVNZ reported.

"The money I do have in the bank is all going for outgoings at the moment ... it's a tough struggle," Green said.

The stress of trying to pay everyone was "ridiculous", he said.

"I spend nights awake in bed, some nights I've sat there crying, wondering what I'm gonna do next."

The neighbouring fruit shop was open for business, which Green said was "just not fair".

He was taking orders over Facebook trying to bring in some money.

Under the current level 3 rules butchers are allowed to operate, if they can deliver or run a click-and-collect or phone order service. Customers are not allowed to come in store.

On April 25 a post to the Mad Butcher Pukekohe Facebook page said the shop would not be opening in level 3.

Flowers have been left outside the shop since Green's death, and there are hundreds of tributes to him online, calling him "one of life's great characters", "generous", "beautiful", "cheeky" and a man with the "biggest heart and always put smiles on peoples faces". His death was a "huge loss" to the community, one poster said.

A post by Tuakau Rugby League Club said although Green did not play, he had supported the club on many occasions.

Green was "always about sport and mahi and we tried hard to convert him to playing and coaching league", it said.

"It was all about the kids, always giving - thank you Roy!

"We are privileged that we got many happy opportunities to laugh and joke around with you over a few state of origin league games," the post said.